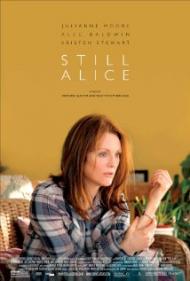 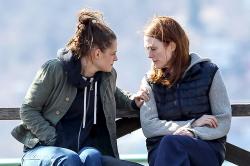 Still Alice is a film that gives Julianne Moore a chance to show off her acting ability as a woman suffering from early onset Alzheimer's Syndrome. The film is a sad chronicle of one woman's rapid mental deterioration that will likely have you reaching for the tissue more than once before the credits roll.

Moore plays Alice Howland, a 50 year old Professor of Linguistics at Columbia University. Happily married, with 3 grown children, she seems to have it all until nagging memory problems prompt her to visit her doctor where she is given the Alzheimer's diagnosis. The knowledge that her mind, the thing that she has relied on most will rapidly be lost to her is compounded in tragedy when she learns that the type of Alzheimer's that she is suffering from is genetic and there is a 50% chance her children will eventually develop the condition as well. Alice's condition worsens rapidly and the story chronicles her descent.

The camera rarely leaves Moore and she carries this film. We feel each stage of her condition through her performance. Her struggle to remember things, using her phone to keep a list of everything she has to remember and then using it as a gauge to judge the progression of her disease. The fact that her entire career has been based on communication and now she is losing the ability to do just that is the irony of her life. Her confusion, irritability and even embarrassment are chronicled and conveyed in such depth by Moore that you would have to be the most inhuman sociopath not to empathize with her.

Because the film remains so tightly focused upon Alice we never really get to see anyone else in the film as deeply as we do her. There are issues that are raised that never feel fully resolved. Perhaps this was intentional by the filmmakers, but it weakens the story. Alice's oldest daughter, Anna (Bosworth), has herself tested for the genetic defect that her mother has and it comes back positive. We can see that this generates some resentment, as unfair as that may be, but there's never a scene that follows up on that resentment. Moore does a good job of showing the horror she feels as a mother having passed on this gene to her own children, but we never see the story from Bosworth's point of view. Similarly, Alice's husband (Baldwin), remains seemingly cold and distant throughout the film. We never see the full effect his wife's condition has upon him. Again, this may have been a deliberate move by the filmmakers, and it does have the effect of keeping the running time just 90 minutes, but it does feel as though we're only hearing half the story. Surely there was a way to keep the focus upon Alice and still show a full emotional range from the supporting characters.

The second biggest part in the film is played by a surprisingly good Kristen Stewart. She plays Lydia, Alice's youngest daughter. A wannabe actress and the least successful member of the family, she becomes the family member to show the most interest, patience and sympathy with her mother. Although we don't learn a great deal of detail about her, she is the only other character to approach being fully rounded besides Alice.

Despite some narrative weaknesses, in terms of generating emotion, Still Alice more than succeeds and that's thanks almost entirely to the sensitive portrayal by Moore. It's one of the finest performances of this or any other year. Watching her succumb to this disease is truly heartbreaking. 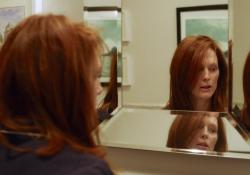 Scott, the only point of contention I have with your opinion is when you state that it weakens the story to keep it so closely focused on Alice. On the contrary, this technique adds to the emotional impact of her tragic story. At the beginning of the movie the focus is broader. It is only as the disease closes in on Alice that the camera moves in as well. Characters enter and exit her shrinking world. There always seems to be a flurry of activity just out of camera range, symbolizing the world just beyond her reach. It is called Still Alice, after all. It's one woman's desperate journey to remain herself as long as she possibly can. It is true that her family members' problems are never fully resolved. We don't see their resolution for the simple fact that Alice isn't able to see their resolution.

Julianne Moore is beyond brilliant as Dr. Alice Howland. Watching her succumb to this horrible disease is one of the saddest things you'll see in a movie all year. As Scott said, this is the tearjerker of 2014. Alec Baldwin, Kristen Stewart, and Kate Bosworth are all fine in their supporting roles but this is a one woman show from start to finish. She's the focal point of every scene. The best the other actors can do is look on in silent horror while searching for any familiar aspect of their mother's personality. Moore shows us the deterioration of her brain without resorting to histrionics. The disease might kill her mind but it cannot defeat her spirit.

Married filmmakers Richard Glatzer and Wash Westmoreland have written and directed a diverse group of movies together including The Fluffer (2001), Quinceanera (2006), and The Last of Robin Hood (2013). Still Alice is their most emotionally powerful film to date and Julianne Moore should be a lock for a Best Actress nomination at this year's Oscars. I'm predicting a close battle between her and Reese Witherspoon for Wild. If you enjoy a good cry at the movies, or simply want to witness a sublime acting performance, Still Alice comes highly recommended. It's a tragedy of operatic proportion so bring plenty of tissue with you.

One of my personal fears is that I will lose my memory. There are times when I tell someone something only to have them tell me that I have already told them that story. I have referred to my sons by my brother’s names. Perhaps I already have a form of Alzheimer’s. I certainly hope not and the idea of suffering from it scares the hell out of me.

Still Alice reinforced those fears. Moore brilliantly shows us the frustration of a woman who forgets someone she met mere minutes before and gets lost on a campus she has spent years working on. For me, the worst moment was when she stood in front of her own daughter and addressed her as if they had just met for the first time. How horribly sad is that? It is truly depressing watching Alice struggle to maintain her life as she knows it. Here is a person not asking for anything except that she not lose all that she knows. I truly love Patrick’s description that Alzheimers might kill her mind but not her spirit.

I see Scott’s point about how the movie left some unresolved suggestions going on in the background. Did anyone else think that John was having an affair? Throughout the movie he has to go to evening “meetings” and he gets phone calls that he takes into another room. As Patrick wrote, this is Alice’s movie and perhaps the point was that this affliction is all consuming, leaving those other issues out of her parameter of concern as she is so focused on her own devastating problem.

I agree with Scott that Kristen Stewart is decent, even though she is playing a gloomy little puss, as usual. The rest of the cast is merely present. Baldwin is a generic husband who may have a secret. Bosworth is cute but barely noticeable. Hunter Parrish seems only included so as to have a girlfriend for his mother to forget.

I find it interesting that both Julianne Moore and Eddie Redmayne both made films about a debilitating disease and are the front runners for an Academy Award, while each also have a science fiction fantasy film currently stinking up theaters all over the country, Seventh Son and Jupiter Ascending. Is it a coincidence or a strategy for demonstrating their acting range? I guess we will find out on Oscar night this coming…I can’t remember when but I am sure it is sometime soon.