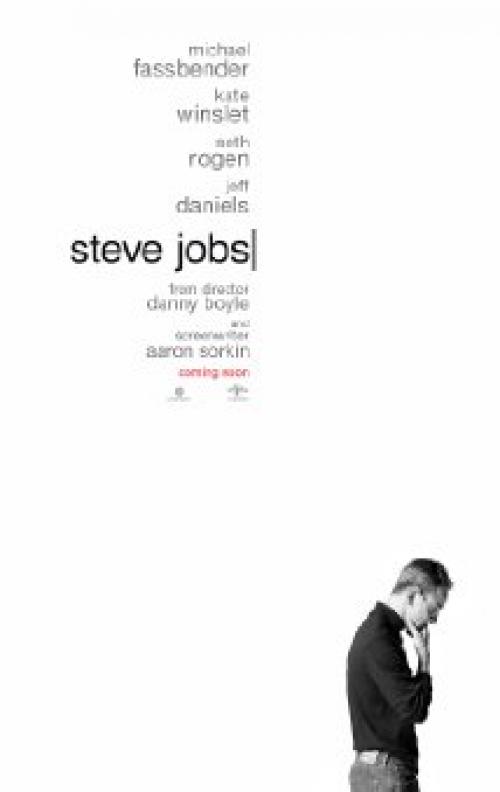 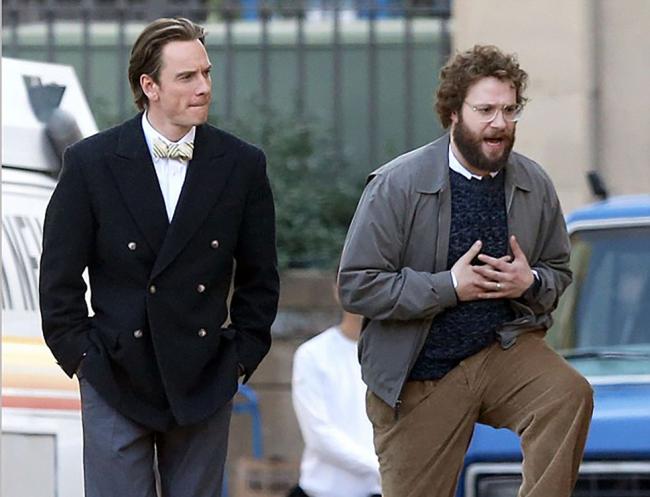 The history of the personal computer is as much about personalities and ego as it is about technology. Steve Jobs, written by Aaron Sorkin, directed by Danny Boyle, and starring Michael Fassbender, keeps the focus very much on those personalities. Although it can't help but include some of the factual history of Apple Computer and the personal computer in general, this is a character study of one man, rather than an all-encompassing look at a company or an industry.

Unlike the more traditionally structured Jobs (2013), which starred Ashton Kutcher as the tech visionary, this story is told in three scenes. Jobs was famous for his product launch presentations and Sorkin's script takes place just prior to three of his most famous. The first is in 1984, when Jobs was the golden boy of the new era of personal computers about to launch the original Macintosh. The second is in 1988, after Jobs' fall from grace and expulsion from the very company he co-founded, when he is about to launch the NeXT computer. And the final is in 1998, after Jobs triumphant return to Apple and his launch of the iMac. Each scene is played out in real time as Jobs confronts recurring personalities from his life.

Although Fassbender doesn't really look much like Steve Jobs, he nevertheless embodies his famously temperamental and egocentric characteristics. Jobs was a notorious control freak and the script and Fassbender don't shy away from that. Like the real Steve Jobs, this version is easy to admire for what he produces, but difficult to like on a personal level. He's selfish, petty, vindictive, and eternally convinced that he knows better than everyone else.

The worst, or at least the most famous, evidence of his emotional failings is the denial of his daughter Lisa. It's his relationship with her that is the heart of the film. During the first sequence, Jobs denies her outright and wants little to do with her. It's the resolution of their relationship that is the resolution of the film. It's what humanizes him.

The other characters to have an impact on Jobs's life in each of the scenes are Apple co-founder Steve Wozniak, played surprisingly well by a serious Seth Rogen. Woz plays the role of Jobs' conscience, and is subsequently ignored. John Scully (Jeff Daniels), the CEO of Apple whom Jobs hired and who ultimately drove Jobs out of Apple, is a father figure. And hovering constantly is Joanna Hoffman (Winslet), the head of Macintosh marketing, and the one person who seems to be able to convince Jobs to do anything.

As you'd expect from a screenplay by Sorkin, the dialogue comes fast and furious. All of the action and emotion is in the spoken word. He's the master of densely worded, smart screenplays and this is another great example. Although the dialogue is fictitious and several key events in the history of Apple are glossed over or skipped for the sake of drama, Sorkin nevertheless captures the spirit and the legend of these characters.

I've always had an interest in the world of high-technology and the personalities who've brought it to life, but for this movie that shouldn't be a prerequisite. If you aren't as familiar with the players, you may not understand all of the names and references that are thrown around, but you'll have no problem following the human drama and the character study that make Steve Jobs and this movie so fascinating. 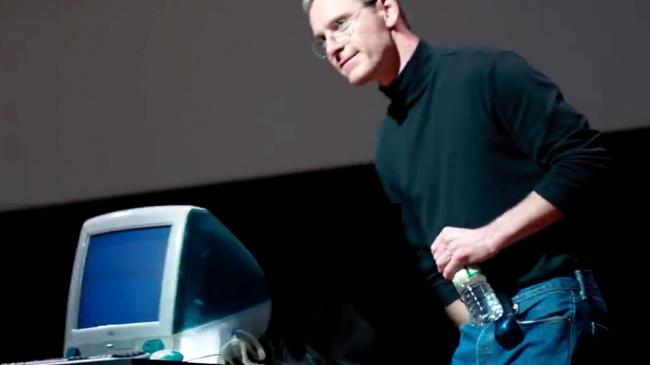 Steve Jobs captures the genius of the man as well as his huge ego and often cruel behavior. The script, the direction and the acting are all top notch. Danny Boyle keeps the stage-bound script dynamic with interesting angles, unusual camera movements and unexpected edits. The ensemble cast performs like a well-oiled machine. As my brother wrote, Michael Fassbender captures the essence of Steve Jobs without the benefit of a close physical resemblance. In a way it makes the performance even more impressive. Kate Winslet matches him as Joanna Hoffman, having fun with yet another accent. Seth Rogen is indeed a bit of a pleasant surprise as Steve Wozniak.

Each of the movie's three scenes has Jobs meeting with the same people. It really is like a three act play and could very easily be adapted to the stage. As you might expect, despite the best efforts of Boyle, and Michael Fassbender in the title role, the star of the show is the screenplay by Aaron Sorkin. Not since Joe Mankiewicz has a writer written denser, wittier, or more intelligent dialogue.

In one scene Jobs is confronted by Wozniack in front of a group of people. They argue. In bitter exasperation Wozniack says, “You can't write code... you're not an engineer... you're not a designer... you can't put a hammer to a nail. I built the circuit board. The graphical interface was stolen from Xerox Parc. Jef Raskin was the leader of the Mac team before you threw him off his own project! Someone else designed the box! So how come ten times in a day, I read Steve Jobs is a genius? What do you do?” Without missing a beat, Jobs replies, “I play the orchestra, and you're a good musician. You sit right there and you're the best in your row.”

As frustrating as that is to hear, he has a point. There has to be someone with the big picture in their head. Someone who worries about every little detail. Look at how concerned and determined Jobs is, in the opening scene, over whether or not the Macintosh will be able to say “Hello”, when nobody else gives a shit. It may seem unimportant but someone has to be there to connect every dot and that, coupled with the ability to inspire others, was perhaps the real genius of Steve Jobs.

Here are a couple of his best lines, courtesy of Sorkin... “I sat in a garage and invented the future because artists lead and hacks ask for a show of hands!” or (in reference to a new product launch) “The two most significant events of the twentieth century: the Allies win the war, and this.” When he insists the exit lights be turned off before a presentation, he's told it's a fire hazard. His reply, “If a fire causes a stampede to the unmarked exits, it'll have been well worth it for those who survive.”

Steve Jobs is more play than biopic. It's a character study in three acts featuring one of the most fascinating human beings of the twentieth century. He's been dead now for four years and already he's been mythologized like someone out of Classical Rome. Like Julius Caesar, he's been the subject of numerous books and several films, with more sure to come. Aaron Sorkin's Steve Jobs may one day stand alongside William Shakespeare's Julius Caesar as the most famous work of art on its subject. Don't miss it. 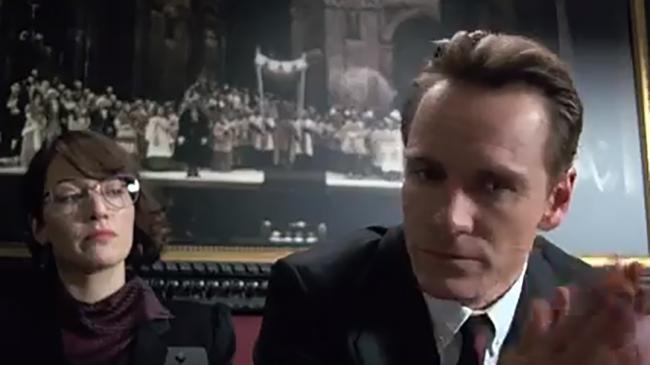 I get completely what Steve Jobs brought to the table. He is like a manager at any business, who has to see the big picture while people underneath him do the actual work. It is an important job that the workers never seem to fully appreciate, always thinking they are being over looked. Steve Wozniak represents the blue collar worker who feels they toil while the boss gets all the credit. What Wozniak never delves too deeply into is that the boss also gets all the blame for the business's failings, not the worker.

Steve Jobs has become somewhat of a mythological character but I find him boring. I have put very little time into reading or learning about him. All he represents to me is the epitome of capitalism, and I mean that as a compliment. As portrayed in this movie, he was an arrogant ass and not someone I cared to know more about. Sure, I enjoy the products he has promoted, but I also like chai tea and have no interest in reading up on its history and who first brewed it.`

I agree with my brothers that this portrayal of Jobs is written like a well structured drama. The lines are crisp and delivered with the right tone and emotion. My favorite exchange is when Jeff Daniels says to Michael Fassbender, "You're gonna end me, aren't you?" and Fassbender responds with a smirk, "You're being ridiculous. I'm gonna sit center court and watch you do it yourself." The one line I will remember the most is, "God sent his only son on a suicide mission but people like him because he made trees."

Fassbender and Daniels are terrific here, much as they have been throughout their careers. I was pleasantly surprised to see Seth Rogen playing it straight. I loved his line, "It's not Binary. You can be gifted and decent at the same time." If he keeps this up, I may one day even consider him an actual actor.

There is plenty to enjoy in this well written film and even though the subject matter was nothing I cared in the least about, I was never bored. The script deserves some award mention, as my brothers wrote, this is Sorkin's success.