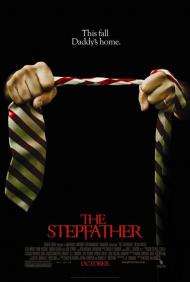 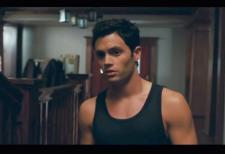 Penn Badgley obsesses over his stepfathers possible past.

If you have seen the previews for The Stepfather then you have no reason to see the film. I have never seen a movie trailer give away so much of a movie's plot before. Consider that the movie hinges on one character discovering who another really is, why give that one and only mystery away in the previews?

Michael returns home for the summer, from military school. He finds a strange man, David, living with his mother, sister and brother. His mother is in love with David, and they plan to marry soon. Michael is suspicious of him, and rightly so as the movies opens with a scene that divulges to the audience that David is in fact a serial killer. With that knowledge, the only thing the audience has left to learn is whether or not Michael will discover David's truth in time to save his family.

David and Michael play a game of cat and mouse. David suspects something but his Mom and girlfriend, of course, do not believe him. Meanwhile David continues killing more people off, and that is where the movie lost me.

Read no further if you do not want the plot ruined. David kills Michael’s aunt and more importantly, his father. It no longer mattered what happened to David as he had already scarred these people for life. It is clearly shown that his sister and brother love their Dad and now he was gone, no kind of comeuppance for David could make those kids whole again.

The writers may have understand that, as David gets away. Yes, you read that right. David kills at least half a dozen innocent people in this movie and gets away with it all. What satisfaction is to be gained from watching a movie where innocent, although slightly dumb, people get killed and their killer just moves on to the next victim? David kills their father and aunt and the kids do not even get to kick his ass!

The Stepfather is a "B" movie at best that will soon be forgotten. From start to finish, nothing is explained. Why was Michael sent to military school? Why does he and his biological father have issues? Why is Michael's mom such a dumb ass? Last but most importantly; why does Hollywood make such shitty movies?