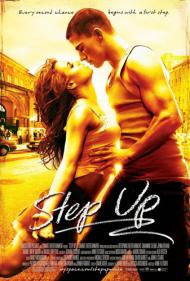 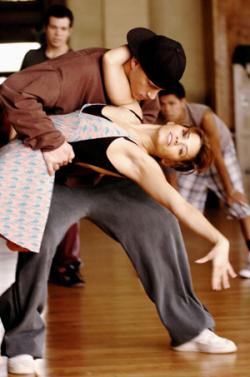 Channing Tatum and Jenna Dewan in Step Up.

Step Up contains the age old romantic cliche of a poor boy falling for a rich girl. See Titanic for best example. The one thing they share is a love of dance. See Save the Last Dance. They must practice like crazy to make their big performance at the end of the movie good. See any number of Judy Garland/Mickey Rooney "lets put on a show" movies.

With such a completely unoriginal plot, it is left to the characters to carry the weight of the film. Tyler is a loser with a loser best friend. His friend is supposedly good at basketball but won't join the school team because he says he is too good for them. They spend most of their time playing basketball, going to parties, playing video games and stealing cars. Yes, the romantic lead of this movie is a bold face criminal. Nora is a girl who wants to dance. That's it. She contains no other memorable personality trait.

After getting caught breaking and entering the dance school, to just mess around, Tyler is sentence to do community service as a janitor at the school. Nora's dance partner hurts his leg and Tyler, being a completely untrained dancer, easily steps in as her new partner. You can guess the rest of the plot without thinking.

The story arc is supposed to be that Tyler learns to fight for something. He eventually really wants to go to the dance school. So what. He never learns from his wicked ways. His comeuppance is that his best friend's little brother, who looked up to Tyler, gets killed after stealing a vehicle from some gangsters. So some missdirected guilt is Tyler's only penance?

With such weak characters and an even weaker plot, one would hope that at least the dancing would be amazing. The director, Fletcher, is a choreographer. You would think that this would be a bonus for such a movie. It's not. None of the dancing stands out. Usually in a musical there is at least one number that stays with you. Not here.

The most notable thing about this movie is that I could probably never stop finding things wrong with it.