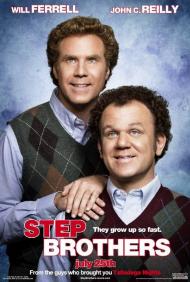 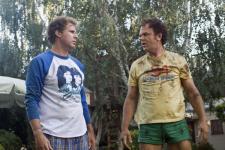 Will Ferrell and John C. Reilly wearing clothes they should have outgrown years ago.

After having worked together several times now, Will Ferrell and John C. Reilly may very well be remembered as a comedy team. In the history of comedy teams there is usually a funny one and a straight man. Think of Abbott and Costello, Martin and Lewis, Laurel and Hardy, Lucy and Ethel. The uniqueness of Will Ferrell and John C. Reilly is that neither is the straight man.

In Stepbrothers, Will Ferrell and John C. Reilly play forty year old slackers who still live with their single parents. They become stepbrothers when their parents marry. This is where the jokes are supposed to start flying. They instantly hate each other and act just like two jealous eight year olds. They threaten each other and fight. They talk crude and do juvenile things. At one point Ferrell pulls his testicles out of his pants and rubs them on Reilly’s drum set just to make him mad. Even after they eventually become friends, they still act like kids. All of their childish antics causes their parents to break up and it is the catalyst that finally causes the two idiots to grow up.

With the aforementioned comedy teams, one person played the idiot while the other played the maturer of the two. It was the straight persons reaction to the funny man that really sold the jokes. Will Ferrell and John C. Reilly play characters that are pretty interchangeable. Ferrell is supposed to be the shy one and Reilly the out going one, but they are both still idiots. Their parents getting mad at them does not help the joke, it just makes it all the more obvious that they are enabling their middle aged sons to act idiotic.

Either Will Ferrell or John C. Reilly should have played their character differently. One could have remained an immature, foul mouthed, middle aged child while the other should have been an insecure nerd. A childish idiot teaming with a socially ignorant, yet intellectual dweeb could have bounced off each other better than just two similar morons. An audience takes its cues from the reaction of the characters on screen. The parents just get mad, and as such I never laughed. I just thought how pathetic their parents were. 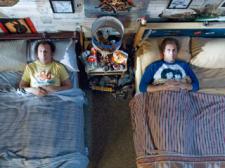 The man-boy schtik is getting old.

This movie is a Saturday Night Live sketch stretched out into movie length and like most Saturday Night Lives sketches, it drags on for far too long. We get the joke already. These two 40-year-olds behave like 8-year-olds. Ha-ha, now can we move onto something else? Because in all honesty, most of the time they come off as seriously mentally handicapped and not very funny.

That this is a Judd Apatow produced movie should come as no surprise. All of his movies revolve around the man-boy concept and this movie just takes it to the extreme. In Apatow's world all men are immature frat boys. It's an old schtik and it's long since worn out its welcome.

Not that I didn't laugh a few times. I mean this is Will Ferrell we're talking about so some of the movie is bound to be funny. I love his, "How is that a skill?" line following his step-father's "touching" story about wanting to be a dinosaur as a kid. Like all Apatow movies though, it seems like the cast is having more fun than the audience.

You're right Eric that this movie would have been better with a straight man and a funny one. But you get the feeling that neither Reilly or Ferrell wanted to give up being funny and as result both of them are less so. But so long as they makes each other laugh, that's what counts, right?