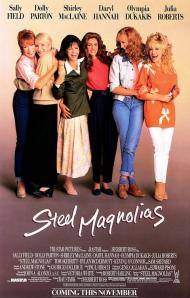 Steel Magnolias is a classic tearjerker starring an amazing cast of women. It was based on a play by Robert Harling and features some memorably witty dialogue. It's about the bond between a group of women living in Louisiana. Many of the scenes take place at a local beauty parlor. These women bicker, laugh and emotionally support each other through good times and bad. Like all great tearjerkers there is a tragic death at the end of the story.

With a foreshadowing of the tragedy to come, the diabetic Shelby has an attack of hypoglycemia while at the beauty parlor. Her mother forces some orange juice down her daughter's throat, “Drink the juice Shelby!” which saves Shelby but embarrasses her at the same time. Shelby gets married and then gets pregnant against her doctor's advice. She has a son but things quickly turn tragic and the tears start to flow.

This movie features some superb acting. Sally Field has a great scene at the cemetery that was shot in one take. Steel Magnolias is also very funny. Dolly Parton as Truvy says, “Honey, time marches on and eventually you realize it is marchin' across your face.” But it is Olympia Dukakis as Clairee that gets the best lines. Here are two of my favorites, “The only thing that separates us from the animals is our ability to accessorize.” and “Well, you know what they say: if you don't have anything nice to say about anybody, come sit by me!”

I read an interesting bit of trivia concerning this movie. During the play's initial off-Broadway run, Bette Davis saw it and was interested in buying the film rights. She envisioned playing the Shirley MacLaine role with Katharine Hepburn in Olympia Dukakis's part and Elizabeth Taylor in the Dolly Parton role (this would have been quite surreal as Truvy says at one point, “When it comes to pain and suffering, she's right up there with Elizabeth Taylor.”) Bette Davis was disappointed to learn that the rights holders intended to cast much younger women. Now that would have been a memorable movie.

Steel Magnolias is a true classic that tells a timeless and universal story. A remake is in the works with an all black cast. Still it is unlikely that this 1989 version will ever be equaled as it is just so damn good. It was instrumental in the launching of Julia Roberts' career and is easily a highpoint in the careers of all involved. These women, like the title suggests, are as tough as steel and yet as delicate as flowers. 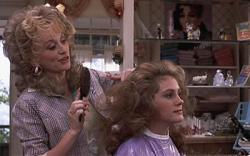 The cast is most certainly terrific and they all deftly handle some great dialogue. Patrick’s favorite was Olympia Dukakis as Clairee. My favorite was Shirley MacLaine as the eternally grumpy Ouiser Boudreaux. Some of her best lines are, “I'm not crazy M’lynn, I've just been in a very bad mood for 40 years!” and “He is a boil on the butt of humanity!”

This is the epitome of chick flicks. None of the male characters even appear in the play. They are only around here to be the butt of a joke or as an excuse for the women to complain about.  Dolly Parton, as Truvy, has some real gems, “I'm just screamin' at my husband; I can do that any time!” and “Oh, Sammy's so confused he don't know whether to scratch his watch or wind his butt.”

Most of the lines are hysterical. The one I laughed the hardest at the first time I saw this film was when Daryl Hannah, as the awkward Annelle, tells Truvy, “I promise that my personal tragedy will not interfere with my ability to do good hair.”

Sally Fields, as M'Lynn, has a few funny lines as well but she really carries the film’s most dramatic moment at the cemetery. “I'm fine! I can jog all the way to Texas and back, but my daughter can't! She never could! Oh God! I am so mad I don't know what to do!” Then comes a completely brilliant moment where drama meets humor. A distraught M’Lynn cries, “I just wanna hit somebody 'til they feel as bad as I do! I just wanna hit something! I wanna hit it hard!” Clairee then grabs Ouiser and pushes her in front of M'Lynn, “Hit this! Go ahead M'Lynn, slap her!”

Steel Magnolias may be making a statement about the strength of women and the value of friendships but I really just love this movie for all of the quotable lines. They can make you laugh as well as cry. What are movies for if not to make us feel and in that, Steel Magnolias truly succeeds. As Truvy says "Laughter through tears is my favorite emotion."