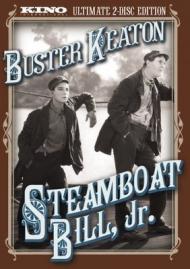 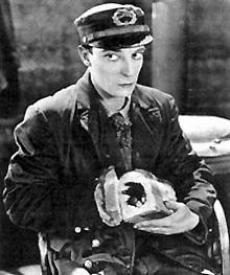 So far, Steamboat Bill, Jr is my favorite Buster Keaton film. It was one of his last great silent masterpieces. It contains his most famous stunt and Walt Disney likely used it as inspiration for his first Mickey Mouse cartoon Steamboat Willie, 1928.

William Canfield owns and runs an old passenger river boat. His arch rival has just bought a brand new one. William is upset by this but becomes excited when he gets a telegram from his son who has just graduated from college. Will has not seen his son, Willie, since he was a baby and pictures him as a big strapping lad.

When they meet, Will sr. is disappointed that Willie is short but he is also disgusted that his son is a dandy. He has a thin mustache, that Will has shaved off. He has a beret that Will tries to get rid of. In a hat store, Will has his son try on many hats. Everyone that he does not like he yanks off his son's head. At one point, Willie puts on a hat that Keaton wore in many films. He quickly throws it away before his father gets the chance.

As coincidence would have it, Will's arch rival has a daughter, Marion, that Willie knows from college. They like each other but their fathers have obviously not seen Romeo and Juliet as they try to keep them apart. Marion gets Willie dressed in a brand new suit to work on his father's boat. When he walks up to the boat, the first mate hands Willie's, again disgusted, father a gun and says, "No jury would convict you."

Although known for his physical antics, Keaton does a pantomime scene that is funnier than Chaplin's shoe dance in The Gold Rush. His father has been put in jail and Willie brings him a large loaf of bread that has tools hidden inside so he can escape. His dad is too mad to take the bread so Willie has to pantomime what he has so the sherif won't know. It's a great scene!

Out doing Harold Lloyd's climbing up the side of a building in Safety Last, Keaton has a real two story wall fall on him. He stands still as the wall falls around him. He just happens to be standing where the window on the second floor is so he is not hurt. It is the movie's most famous scene but many other fascinating things happen during the climactic tornado. The special effects are surprisingly good.

Steamboat Jr. is a funny, quick paced comedy classic. Not only did I laugh but I found the relationship between father and son to be quite interesting. Will treats his grown son as a little boy and is constantly embarrassed by him. However, he defends his son when anyone threatens him.

The movie ends on a sexually suggestive note. After the hurricane and everyone is safe on the river boat, the two fathers agree that their two kids can get married. Marion then kisses Willie who reacts by making an awkward face and puffs out his pockets in his pants with his hands before jumping into the river to drag back a minister. He is obviously to excited to wait. 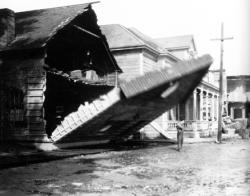 This movie is hailed as a masterpiece but other than the climactic final reel it isn’t that good. It is as if Keaton had a brilliant idea for an extended storm sequence and riverboat rescue but wasn’t sure how to get there. The first 55 minutes is all filler. Keaton’s character of Bill jr. is like a Harold Lloyd character, the wimpy college dandy that is a disappointment to his burly father but who, inexplicably, gets the girl of his dreams.

With the exception of a few pratfalls that Keaton takes (nobody fell down better or more humorously than he did) this movie isn’t funny before the storm hits. The pantomime scene in the jail that you loved Eric is pretty good but nowhere near as imaginative as Chaplin’s shoe eating bit from The Gold Rush.

Other than The General I have not been that impressed with Keaton’s feature length movies. He was a master of the two-reeler but in my opinion wasn’t able to sustain a character and story as well as either Chaplin or Lloyd for a full length movie.

Audiences of the day agreed with me as this movie was not a big hit at the box office in 1928. It would be Keaton’s last as an independent producer. Fearing his dwindling popularity Buster would sign a contract with MGM that same year and give up his creative control for a steady paycheck.

The storm sequence is brilliant and iconic. The falling wall moment is one of the most famous images in all of silent film and THE greatest stunt ever performed by a movie star. The special effects during the entire storm sequence are incredible and taken alone this section of the movie is worthy of four stars. Unfortunately the rest of Steamboat Bill, Jr. deserves two stars at best. I will average that out to three stars. 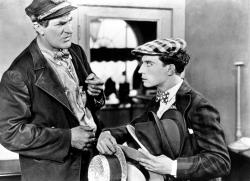 Patrick, you are much too harsh on this delightful comedy. Sure, compared to some of Keaton's shorts there aren't as many laughs, but then this feature has more character development and plot than his early work. It's not that there's a higher ratio of failed jokes, just less jokes per minute overall. I certainly don't think he has any problem sustaining his character or the story for the full length.

I was reminded of Harold Lloyd by Keaton's college boy character. There are parallels between this character and Lloyd's Kid Brother from just the year before.  Both of them are weak sons of strong fathers who end up saving the day. Although Lloyd's came first, I found this one to be more consistently funny.

Like you Eric, I laughed at the "No jury would convict you." title card. His first meeting with his father is one of the funniest sequences in the story. Just the looks his father keeps giving him are priceless. In the barber shop and later in the hat shop, every time he looks at the beret, his withering look of contempt is perfect.

As light and amusing as the first three quarters of the film are, the finale during the storm is a whole other level completely. I agree with both of you that the special effects are great. Building's collapse and get lifted away. Keaton clings to a tree as it is blown across the town. And of course the falling wall is only one of the most famous scenes in movie history.

Before writing this review I went back and reread my review of Keaton's The General, which I wrote 9 years ago and which was largely negative. Since then I've seen much more of Keaton's work and actually developed quite a taste for it. I'm sure if I rewatched that movie now I would give it a much better review as I've learned to appreciate his talents. Certainly, I appreciated this one.