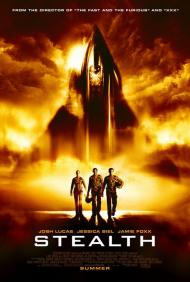 Whenever Hollywood does a movie about new technology it tends to go one of two ways. Either the technology is the best thing that ever happened and is played up to show how cool something is, or, more often than not, it is a Frankenstein's monster wreaking enough havoc to make Luddites out of us all. Stealth tries to have it both ways, and naturally fails at both. A failure that is aided by a misleading ad campaign that implies that Jamie Foxx is the star and that the automated airplane featured in the movie will be threatening a major city. Both implications are blatantly false.

Sometime in the near future, we are told, the Navy has developed three highly advanced stealth airplanes. Not satisfied with these amazing machines, the Navy has gone ahead and a developed an even more advanced plane that is run entirely by computer. It joins the three other piloted planes on a training mission where it is told to learn from them. Unfortunately, not only does it learn their flying skills, it also learns these pilots's tendency to disobey direct orders. This, coupled with a lightening strike, causes the plane to go haywire and for some reason, sends it off to complete a fictional computer simulation left over from the cold war, in which it is supposed to destroy a Russian base in Siberia. The three piloted planes are then sent after it to bring it back. While this might sound like a great set-up for a video game, as a movie it leaves a lot to be desired.

Obviously this movie was made before Jamie Foxx made Ray and won his Oscar, becoming one of Hollywood's A-List stars in the process. His part as one of the pilots is smaller than the other two parts, played by Jessica Biel and Josh Lucas. It is Lucas, who is in fact the star. Foxx is only in the first third of the movie. Lucas and Biel eat up the rest of the movie's time, partly with a lukewarm romance, during which sparks completely fail to materialize.

Perhaps if the people responsible for this movie's trailer had also made the movie, it would have been better. In the preview, you hear Foxx's voice saying that this renegade plane could kill hundreds of thousands of people. While he's saying this line, you see images of Washington DC and another city, implying that these are the targets the plane is threatening, thus giving some urgency to the mission. With the target being a non-existent Russian military base, the threat is a little less intense. Perhaps the filmmakers thought that having a plane threatening a major U.S. city would hit a little too close to home and thus opted for the safer target. It's the politically correct move, but it dampens the movie's effect considerably.

The plane itself, which gets more screen time than Foxx as well, isn't even that amazing. You'd think that it would be full of gee-whiz technology, but apart from the fact that it is flying itself, it does nothing extraordinary. Kitt from Night Rider had more tricks up its sleeve.

Overall, Stealth is a dull movie. It's not even bad enough to hate. In fact, it doesn't really generate any emotion at all other than apathy. 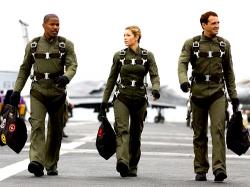 Sometimes action is enough to make a movie enjoyable. The ad campaign may have been misleading and Foxx is not in the movie as much Lucas or Biel. I, however, had no preconceived ideas about this film and thus I enjoyed it more than Scott. Stealth is hardly a great movie but it can be entertaining.

EDI, the computerized Stealth plane is impressive to watch fly with the others Stealths. The aerial shots are exciting. The pilot bailing out, parachuting into North Korea and being pursued was more exciting than any aspect of the similar, yet far more boring, Behind Enemy Lines.

The plot of Stealth is weak and predictable. You know who will betray who long before everyone else does. The romance between Biel and Lucas is completely lacking, “Just tell me you love me, pussy." Is the love stories spark-less climax. For the sake of getting Jessica Biel into a bikini the three leads take a vacation in the south seas that otherwise adds nothing to the plot.

Where as this is a military movie, it was made with too much political correctness in mind. After destroying a building, an aircraft carrier hundreds of miles away instantly announces that there was no collateral damage (civilians killed). The crew is shown being happy about this news. At another point the pilots balk at blowing up some nukes because the radiation would kill people in a nearby village. During the vacation, Foxx gives a speech to a girl about how the world is a beautiful place and sometimes he erases places from the earth when he is told to bomb something.

Stealth is a great paced action flick. It works well when something is happening, but whenever someone stops to open their mouth the movie loses it's way.