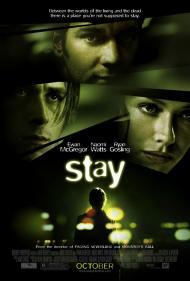 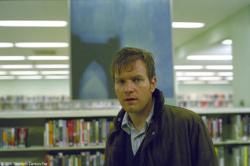 I must warn you that I'm going to reveal the ending to this movie, but only because I hate it so much and there's no other way for me to tell you why except by revealing it. So, if you don't want to know the ending, stop reading now.

Still with me? Ok.

At best, Stay has a mildly intriguing premise, but it's wrecked by overly stylized camera work that will make you feel nauseated or high on drugs, depending upon your own personal experience.

Whatever hopes you might have for a resolution to the premise is completely destroyed by the ending, when you learn that the entire film has taken place inside the mind of someone who was just in a car accident on the Brooklyn Bridge. All of the people in the movie are the people who stopped on the bridge because of the car accident and have been worked into the guy's accident induced fantasy.

The two stars of the film, who play the central roles in the delusion, are Ewan McGregor and Naomi Watts. They both do a fairly decent job in their roles, but why am I supposed to care about two people who, except for the final few minutes of the film, are only figments of somebody's imagination?

I'm not even going to go into the plot of the delusion, because it doesn't matter.

This is the type of movie that actually made me angry when I walked out of the theater. I felt duped and that I'd completely wasted my money and my time in watching it.

The main reason that I went to see it in the first place was simply because it's being marketed as a supernatural thriller with horror overtones, but how is it supernatural if it's all a dream?

Maybe the title for the movie contains a secret in the same way that the plot does, and its secret meaning is Stay Away. 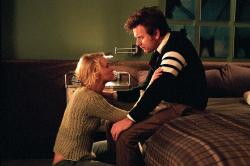 Scott was angry and felt ripped off by Stay. I remember feeling the same way about Identity (2003). Both films are about characters that do not even exist within the confines of the movie itself. Both movies are about events and characters that occur within a single character's imagination. Thus, the audience spends two hours trying to make heads or tails out of what they assume is some sort of mysterious plot only to find out that the writer is playing a joke on them. HAHA, none of it is real. Gotcha!