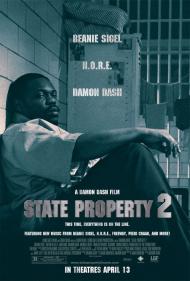 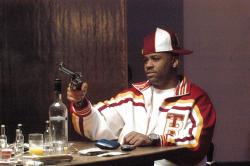 Not having seen the first State Property movie (although a guy I work with has and he says it's not that good) I wasn't sure what to expect with State Property 2. It turns out to be a rather entertaining urban gangsta yarn with almost enough humor thrown in to be a spoof. The fact that very little actual blood is shed even though the story is riddled with flying bullets gives the movie the feel of one of those old Warner Brothers gangster pictures of the 30's, only in color.

The low budget is evident in a few scenes like the prison cafeteria that only has two visible tables in it or the prison warden's office where the lighting is so subdued you can't really see any of the room. Clever editing reminiscent of City of God and stylish direction by Damon Dash makes up for some of these production value issues.

Two rival street crews vie for the drug market in Philly. Beans, the leader of one crew, gets thrown in jail (thus becoming state property) where he meets a guy called Pollo Loco (that's Crazy Chicken for you gringos) who supposedly has important connections with a kingpin from Miami. Meanwhile Dame, the leader of the rival crew, gets involved when one of his places of business gets robbed by Beans' men on a tip from Pollo Loco. Everything builds up to a final shootout on the streets. If you haven't guessed who is setting everyone up by the time it is revealed then you haven't been paying attention.

Many music industry stars have cameo appearances. Most notably Mariah Carey as a high-maintenance bimbo that brings a delivery to Dame. She complains about a flight attendant that spilled something on her boots and so she needs an extra $2,000 to get new ones. The recently deceased Ol' Dirty Bastard is quite funny as a fry cook with personal hygiene issues. Kanye West also has a very quick scene.

State Property 2 isn't for everyone. It is filled with drug dealers and thugs engaging in violent antisocial behavior. Since this is hip hop street culture the words niggah and bitch are casually tossed around like a Frisbee at the beach. What makes it work is the movies' sense of humor. It tells its story with a knowing wink to the audience.

As evidenced by the outtakes at the end, State Property 2 is closer to a comedy than a hardboiled urban epic.