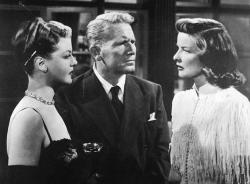 Angela Lansbury, Spencer Tracy and Katherine Hepburn in State of the Union

Frank Capra has never been shy about showcasing politics in his films. State of the Union is his most blatantly political. It contains many political rants and speeches, none even disguised as dialogue. Although Spencer Tracy and Katharine Hepburn made many socially political films together, such as Guess Who's Coming to Dinner (1967), most were light comedies with some drama. This is their most dark. It even starts with a suicide.

Grant is a married father of two, whose mistress, Kay, inherits a news agency after the aforementioned suicide. She decides to encourage and support Grant as a Republican nominee. Due to the affair, Grant and his wife, Mary, have not seen each other in awhile. Jim, the campaign manager that Kay hired, states that Mary must be on board and on hand to support her husband to get the votes needed. However, Mary proves to be the cog in the political wheel. Grant gives speeches from the heart that inspire some, including Mary. However, Kay and Jim want him to say other things that they believe will help get him through the primary. Much to Mary's chagrin, he does. Things get even more tense for Mary when she is forced to invite Kay to her home for a public broadcast, in hopes of dispelling the story of her affair with Grant.

It is easily Hepburn's best part of the film. Hepburn has to cry one moment and laugh in the next. She plays vulnerable and brave at the same time. It is no wonder she had such a long career. The most amazing performance though, is delivered by Angela Lansbury. At the mere age of 22, she plays a ball breaking bitch who fires her editors to their face with out blinking. She holds her own against the great Kate and Tracy. She carries herself with all the presence of a woman with far more life experience. She would revisit this role years later in the political thriller, The Manchurian Candidate (1962).

Frank Capra's original casting choice was to reunite his It Happened One Night (1936) stars, Clark Gable and Claudette Colbert. He could not get Gable, so Tracy was signed. Colbert was cast but shortly after production started she was let go. Upon Tracy's suggestion, Hepburn was given the role of Mary. As the casting was completely by chance, it is interesting just how it ended up reflecting on reality. In real life, Tracy was a married father and Hepburn his mistress. One scene in particular finds Tracy and Hepburn talking alone at night in which Tracy says with all seriousness to Hepburn, "You know that I am neither happy nor successful, not as a man, a husband, or a father." Hepburn wrote in her autobiography how an unhappy Tracy would show up at her home in the middle of the night drunk.

Tracy was noted for not ad-libbing, but rumor has it that he made up a line in the film. When a man enters their hotel room ranting about taxes, Tracy says to Hepburn, "Looks like your brother Dick." She laughs and seemingly spontaneously kicks Tracy in the shin. In real life her brother's name was Dick.

State of the Union is a wonderful drama with an all star cast. If it fails at anything it is in the length. It runs just over two hours. Capra was notably long winded, trying to pack as much politics in that he could. Tracy is playing a Republican but he gives a speech at one point to Menjou where he sounds awfully liberal. Based on a play, Capra is not responsible for all the lines, but he did pad the film with a couple of scenes in airplanes, intending to add some levity to the drama.

They were not needed, as the script already had some humorous scenes. Early on, the homely Margaret Hamilton flirts with Van Johnson every chance she gets. The funniest scene though, is when Hepburn gets drunk with another woman near the end.

State of the Union works very well as a topical drama of the time. References are made to President Truman and then current political situations. However, the real legacy of this film is that it shows just how little has changed politically speaking in the United States. Kay represents just how biased the media is. The campaign scenes show how a candidate's appearance can mean more than the substance of his character. These lines spoken early on by Tracy apply today as much as then, "You politicians, instead of trying to pull the country together, are helping to pull it apart just to get votes. To labor you promise higher wages and lower prices. To business, higher prices and lower wages. To the rich you say, "Lets cut taxes.", to the poor, "Soak the Rich.". Did we not just have an election in which we heard all of that? 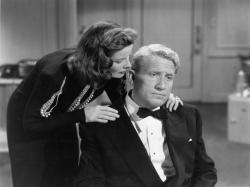 Katharine Hepburn and Spencer Tracy in State of the Union.

Eric said that Lansbury's performance is the most amazing, but it's Hepburn that steals the show. Yes, Lansbury does a great job. She plays the powerful woman quite convincingly for someone so young and she does hold her own against the two stars, but Hepburn is perfect in her part. She balances the comedy and the drama with equal aplomb.

Hepburn and Tracy are one of the legendary screen couples of all time, but their onscreen chemistry has been exaggerated. I think that fans simply project their knowledge of the duo's real life affair into their movies. In this movie though, they actually share a genuine romantic spark. Unfortunately, this is the one movie where that works against the story. They're playing an estranged married couple, but they seem perfect together. They are a much more suitable couple than Tracy and Lansbury.

Although Eric described this as a wonderful drama, I preferred the lighter moments. The scene where Hepburn gets drunk is easily the funniest moment in the film, but there are several others. Van Johnson makes the most of his small part by providing some laughs and his early, short scenes with Margaret Hamilton are worth a few chuckles. And while they do add to the running time, I also enjoyed the airplane scene. I'd rather they trimmed a few of the political speeches instead of the funnier moments. If nothing else, they're entertaining, unlike the pontificating.

It's not surprising that politics in Washington haven't changed. It's only surprising that people were shocked or thought of the political behavior demonstrated here as immoral. Offering patronage and making deals with business and union leaders is simply expected behavior today. The public would only be shocked by a politician now, if they didn't behave like that.

The politics weren't just on the screen. Adolphe Menjou was a right-wing McCarthyite who named names before the committee, while Hepburn was, of course, the opposite. When she learned that he'd named names, she reportedly refused to speak to him except in front of the camera.

As Eric said, it does run long. Buried in its length though, are some very entertaining moments. 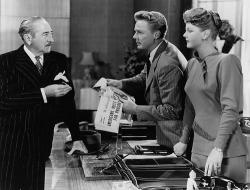 Adolphe Menjou, Van Johnson and Angela Lansbury in State of the Union.

Like Scott I enjoyed the comedy more than the political drama. The drama, especially the melodramatic pontificating Tracy does at the end, is overcooked ham. Hepburn and Tracy are good together as always but the supporting cast easily pulls the cinematic carpet right out from under them.

This was the only movie Frank Capra made with an MGM cast. With the exception of Charles Lane, Arthur O'Connell and Carl 'Alfalfa' Switzer most of his familiar stock company of actors are missing, but not missed. Angela Lansbury impresses with her gravitas, Margaret Hamilton provides a few chuckles with her awkward flirting, but Van Johnson carries much of the humor with his effortless charm in the role of Matthews' campaign manager Spike McManus.

Scott, I wouldn't call his part small, it's a supporting role but he is in many scenes throughout the picture. The first scene in the airplane is very broad slapstick with Tracy piloting the plane in all kinds of daring loops and dives while Hepburn sits calmly knitting. Of course there's no way just an ordinary seatbelt would have kept her from rolling all around inside the plane but it works as comedy mostly due to Van Johnson's reactions. His frightened mugging is the pay off to the sight gag of Tracy suddenly parachuting to the ground.

The plot of the Pulitzer Prize winning stage play State of the Union was transparently based on the real life affair between the married Wendell Willkie (the republican nominee for president in 1940) and Irita Van Doren. Willkie died just over a year before the play opened and it was criticized by some for being insensitive to the feelings of his widow and teenaged son. Speaking of children, Hepburn has one scene where she has to interact with her daughter and son and she completely lacks even a hint of maternal instinct. It's one of the few times in any of her films I've seen where she is unable to convincingly play a scene.

This movie demonstrates that in some ways 1948 was the first modern presidential election year. It was the first since the end of WWII and the first in which television played a major role. Although the first televised presidential debate didn't happen until 1960, as this movie shows TV would soon replace radio in its role of spreading campaign messages and gathering supporters.

The script is quite clever. Early in the movie someone quotes Henry Clay's famous campaign slogan, “I'd rather be right than be president.” Later in the movie, during Hepburn's drunk scene, she paraphrases it by saying, “I'd rather be tight than be president.” and then giggling before sipping her martini. I agree she's very funny in this scene but to be honest she gets plenty of help from Maidel Turner as Lulubelle Alexander. In fact, Turner steals the scene right out from under Hepburn's nose with her infectiously raucous laugh. “I haven't enjoyed myself this much since Huey Long died!”

State of the Union remains a good movie but it works much better as a comedy than as any kind of serious political statement.