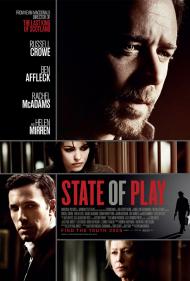 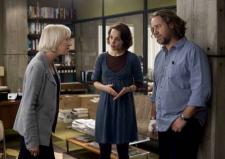 State of Play is a tense political/journalistic thriller based on the BBC series of the same name. The series was so well done and so elaborate that I had my doubts that any single movie could match it. And while I won't say this movie does equal the original, it does deliver solid entertainment while condensing the story and making enough changes that it kept me surprised and intrigued right up until the very end. Certainly you don't even need to know that there was a series to enjoy this movie.

Crowe plays Cal McAffrey, a veteran reporter Washington D.C., who is investigating the double-homicide that the movie opens with. Affleck plays Stephen Collins, a Congressmen, and Cal's ex-college roommate. Collins' research assistant is also killed near the beginning of the film and as time goes on it begins to seem as if there could be a connection between the killings Cal is investigating and the death of Collins' assistant. It also quickly becomes apparent, based on Collins reaction to his assistant's death, that his relationship with her wasn't strictly that of boss/employee. From there, the plot only gets more complicated. It involves a free-lance security force, congressional hearings, sex scandals, the demise of print media and a whole lot more.

In fact, one of the surprises to me was just how much plot is crammed into the two-hours running time. I was certain that the story would run close to three hours, but they manage to retain the core of the plot and add new elements. The most major addition to the story that can be revealed is the angle that the printed newspapers are in danger and that soon they may become extinct. They try to make the printed paper seem more romantic and authentic here, but clearly that happening isn't a possibility, it's a certainty. All that will happen is the medium will have changed though, not the news or those who write it.

Along with Crowe and Affleck, the cast also features Rachel McAdams as a blogger at the same paper as Crowe. Helen Mirren as the editor of the paper. Robin Wright Penn as Collins wife and Cal's ex. Jason Bateman as a sleazy PR guy. And Jeff Daniels as another congressman. While some of the cast only get a small amount of screen time, universally they all deliver great performances. Crowe is clearly the star, but Affleck isn't outshone as the buttoned down and perfectly coiffed congressman.

The thing that keeps the plot moving is the sense of urgency the story conveys. With deadlines looming, there's always a sense of forward movement. Most of the story is suspenseful, but there are a couple of scenes of true action. The best of which is when Cal is trapped in a car park with a potential murderer stalking him.

Intricate and smart, this is a thriller that forces you to pay attention to all the details to follow along. Fortunately, the reward is worth the work. 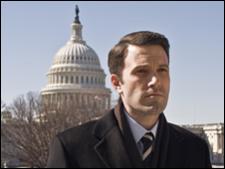 Ben Affleck in State of Play.

Sate of Play tries hard to seem topical. A politician having an affair is almost a cliche at this point. The demise of Newspapers is likewise old hat, as people have far more immediate sources of information. The free-lance security force in the movie is obviously intended to be Blackwater. Just like the fictional organization mentioned in the movie, Blackwater was sent to New Orleans after hurricane Katrina. They are likewise made up mostly of former military personnel, and both have huge contracts with the U.S. Government. Also like the movie, the founder of Blackwater, Erik Prince, has been in front of a Senate Hearing.

All of these references make for an engrossing setting. The problem is that there is not one single sympathetic character in the entire movie. Crowe is playing the hero, in that he is out to get the story on his best friend. However, he had an affair with his best friend's wife, so how likable does that make him? McAdams is cute. That is about all she brings to the table. Mirren gets a few scenes where she makes like J.K. Simmons barking at Tobey Maguire, but as Scott wrote, to what end? Afleck and Bateman at least get to show some range by playing complete opposites of their roles in Extract.

Although there is tension in the twists and turns of the plot, the end of the film was a disappointment. The professional killer, who lurked only in the shadows throughout the movie, suddenly comes out and attacks Crowe on a public street, basically giving himself up. Why? He could have just shot him from a distance like he did another victim. For a film attempting to seem like a true story, the ending did not make sense. The assassin should have gotten away. It would have at least left me with a feeling that we do have a need for investigative reporters to get out from behind their computers and try to uncover those threats and crimes that mere bloggers cannot.