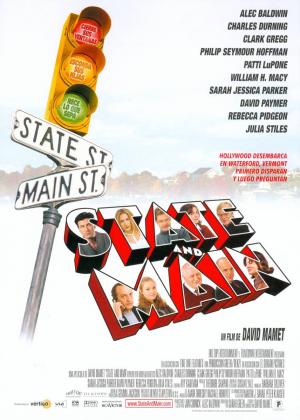 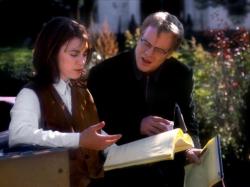 Rebecca Pidgeon and Phillip Seymour Hoffman in State and Main.

State and Main is a comedic look at what happens when a large scale Hollywood production descends upon a small Vermont town. It features a cast of well known actors and is written and directed by David Mamet, the writer of Glengarry Glen Ross (among many other works). It's a highly entertaining film that should, with its many Hollywood inside jokes, appeal particularly to movie buffs.

Waterford Vermont is one of those idyllic small towns that only seem to exist in the movies. It's one of those picturesque New England villages where everyone knows everyone and poverty seems to be non-existent. It's to this innocent locale that the production of The Old Mill moves after they are driven out of their last location for reasons that will become clear as the movie moves along. The director of the film and ringleader of the circus that comes with it is Walt Price (Macy). He's a diplomat who knows when to schmooze up to the locals while dealing with the egos and the "hobbies" of his temperamental stars. He'll say whatever he needs to, to anyone, to keep his movie on track. "It's not a lie. It's a gift for fiction," is what he tells his first-time scriptwriter. Using his gift, he soon has most of the town in awe of the Hollywood heavyweights.

The cast is an ensemble one. Philip Seymour Hoffman is the neophyte writer who finds love with one of the locals in the film's sweetest storyline. Alec Baldwin plays the film within a film's male lead with a sexual predilection that threatens to derail the film. His female counterpart is played by Sarah Jessica Parker, whose diva actress has suddenly decided that she won't show her breasts again, even though, as several characters point out, "The country could draw her tits from memory." Julia Stiles is a local teen with a crush on Baldwin's character. And Charles Durning and Patti LuPone play the Mayor and his wife. There are several smaller roles filled with character actors that you are bound to recognize as well.

Uniformly, the acting is terrific. Hoffman is arguably the lead and he plays things lighter than his more famously intense performances. It's the supporting cast that provides most of the laughs and there's real competition to see who can steal the most scenes, with, for my money, William H. Macy coming out on top.

As you would expect from Mamet, the script is filled with memorable and witty dialogue. Many of the jokes come at the expense of Hollywood, such as when Hoffman's character asks, "What's an associate producer credit?" To which the reply comes, "It's what you give to your secretary instead of a raise." And Macy's director asks, when looking at costume sketches, "Who designed these costumes? It looks like Edith Head puked, and that puke designed these costumes." There are also some lines that are less funny, but memorable anyway, such as, "Only second chance I know, is the chance to make the same mistake twice." and "Everybody makes their own fun. If you don't make it yourself, it isn't fun. It's entertainment."

The humor keeps the film moving along at a fast pace. It takes place over just a few days. Despite the location scenes, there's a play like feel to the film and I'm surprised no one has adapted it yet. It has the makings of a classic stage farce. There's not a strong plot, being more a series of events, but there is an arc to it all. The ending, or rather the third act leading up to the ending is perhaps the weakest point of the story, with a slightly implausible plot twist, but it hardly damages the overall film.

Fans of Mamet and those with a sense of humor and an interest in Hollywood are bound to find plenty to enjoy in this sharply written and acted film.

Sarah Jessica Parker and Alec Baldwin in State and Main.

I enjoyed State and Main but perhaps Scott's glowing review raised my expectations a bit too high? David Mamet's screenplay is witty and acerbic but it's also quite cynical and not as funny as I expected. The central arc in the story is about the writer, played by Hoffman, having a moral crisis. Will he become as jaded as everyone else involved in the movie or will he do the honest thing and maintain his purity of spirit? With the exception of the central couple played by Hoffman and Pidgeon, there really isn't a likable person in sight. I also didn't think the pacing was all that great for a farce. Fortunately the cast makes up for most of the shortcomings in the script and the direction, and it does contain some very funny dialogue.

I'm not normally a fan of William H. Macy's. I find him dull and his ugly mug is painful to look at for long periods of time. Here, however, he was perfectly cast as the smarmy director who will say anything to get his movie made. I agree that he steals the most scenes with his sarcastic and hilariously offensive wisecracks. When the producer asks him how he's getting along with the locals, Walt replies, “Like dykes and dogs!” When a designer describes the material he wants to use for the firemen's costumes he says, “It's not black but it looks black. it's not brown...” Walt interrupts him with, “Yep, it's faggy without being homosexual.” But my absolute favorite line of Walt's is when he excitingly asks Marty, “Hey, did you see the grosses for Gandhi 2?”

Alec Baldwin and Sarah Jessica Parker are both good as the stars of the movie within the movie. State and Main ends with their big scene and it's quite funny. This movie demonstrates how big stars are catered to and given preferential treatment by nearly everyone they come in contact with. Bob Barrenger and Claire Wellesley live in a protective bubble that enables their various neurosis and peccadilloes. The rest of the ensemble cast is equally good, although I thought Charles Durning and Patti LuPone were underused. The script leads us to expect a dinner party scene with them that never materializes.

I fear my review sounds more critical than I intend it to. I actually enjoyed spending this time in Waterford, Vermont with this eccentric cast of characters played by this talented group of performers. David Mamet is a gifted writer with a penchant for thinking up caustic yet witty dialogue.

State and Main was quite topical for its time. In 2000 the idea of a company paying for product placement in a movie was still relatively new. There's a running gag about an internet company that wants to pay money for product placement in the movie being made here. The fact that the movie is set in the 19th Century doesn't deter them at all. There's a visual punchline to this joke during the filming of the big scene.

I agree that State and Main is sharply written and acted, only with slightly less enthusiasm than my brother Scott. 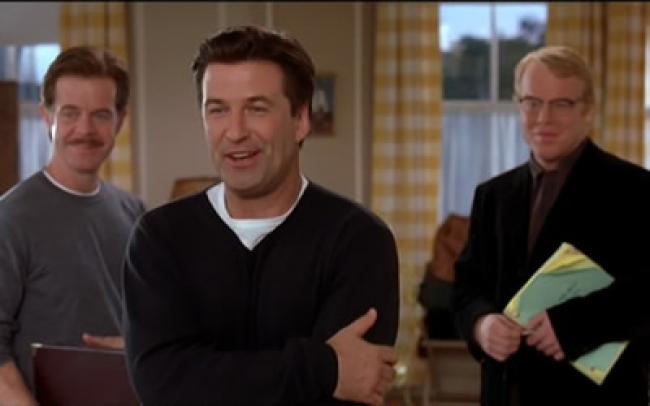 Agreeing with my brothers, the witty dialogue is the best thing going on in State and Main. They both mentioned some of their favorites while I will write that anything that comes out of William H. Macy's mouth is gold. When Phillip Seymour Hoffman tells him, "I have to tell the truth." Macy replies with complete disdain, "That, that is just so narrow!"

Patrick mentioned a running gag, while my favorite one is provided by Jim Frangione as one of Macy's assistants, who keeps reminding Macy that, "My wife is going to have a baby." to which Macy keeps responding rudely, "Oh, good, let's bring more people into this overcrowded world." or with annoyed sarcasm, "Thank you for keeping me current." Now had this been a movie star informing him about his wife, the director's responses would have been different.

This film entertainingly skewers spoiled movie stars, with the most telling line coming from Alec Baldwin as Bob Barrenger when he ends the movie with the line, "Beats workin'." If this movie proves anything, it is that movie stars get treated way too well for what they accomplish. Anyone who wants to argue that movie stars work hard for a living have never had a job where they do not get fawned over and praised at every turn by everyone they bump in to for simply being decent looking. These people expect to get away with numerous reckless affairs and demands for all kinds of money.

It is in those moments that made this film truly enjoyable for me. It humorously demonstrates just how unfair the world is if you can make others lots of money and makes fun of a warped reality that some privileged people, who think themselves above the law, live in. Do you know how many women would drop their shirt for 800 grand, let alone a fraction of that amount?

This now leads me to the weakest aspect of the story, Phillip Seymour Hoffman as the screenwriter and Rebecca Pidgeon as Ann. As Patrick wrote, they are likable but hardly realistic. He is a moron while she seems to know absolutely everyone and everything. She quotes something he wrote but he does not recognize it. When he gets hurt she helps him by providing some disinfectant, "...here's some hydrogen peroxide." but he objects because, "I don't drink." He has no clue what to do about his script, "How do I do a film called "The Old Mill" when I don't have an old mill?" Well thank God Ann is there with her creative mind who states the obvious, "Well, first you've got to change the title."

State and Main gleefully pokes fun at Hollywood elites but cautiously treats small town folk like they all live in Mayberry. I would have liked the locals to have been parodied a bit more but I guess the film makers knew well enough that it was funnier to satire Hollywood people than your customer base. Still, the dialogue makes this film worth a watch and look close for John Krasinski in his, blink and you missed him, film debut.