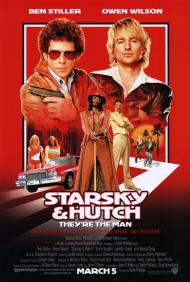 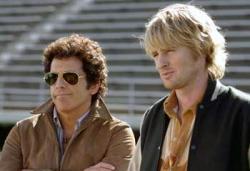 I have to confess that the only thing I remember about the original Starsky and Hutch television show is that red car with the white stripe. My lack of any clear memories of it leads me to believe that I wasn't too impressed by it. The same cannot be said of the new big-screen version, which I found to be remarkably silly and even more remarkably funny with emphasis on the syllable 'fun'.

Stiller plays Starsky a strait-laced police officer in Bay City. Wilson is Hutch, a cop who plays by his own rules, robbing bookies to pick up cash on the side. When they both goof up around the same time, their police captain decides that they deserve each other and makes them partners, thus getting the plot and the laughs going in earnest.

The plot involves the partners going after a high-powered drug dealer (Vince Vaughn), who's invented an undetectable type of cocaine, although the plot is really just an excuse for Starsky and Hutch to get themselves into funny situations. They manage to bumble along through the mystery only with the invaluable help of street informant Huggy Bear (a pimped out Snoop Dogg).

Unlike a great many remakes of an old television series, Starsky and Hutch doesn't update the characters and situations to modern times. The movie takes place deep in the heart of the seventies and many of the jokes are a result of that. Much is made of the character's wardrobes and hairstyles.

Although the supporting characters are all well played (including an amusing cameo by the always funny Will Ferrell), it is strictly due to the chemistry that exists between Stiller and Wilson that this movie works as well as it does. In this, their sixth movie together, each plays to their respective strength. Stiller is the wound-up, uptight guy while Wilson is his usual laid back charming self. The result is a big step up from their last collaboration in Zoolander, which was a hit-and-miss affair.

To be fair, not all of the jokes work. The dance off, between a coked up Hutch and a disco doofus, seems like a rip-off of the Walk Off scene from Zoolander, only less funny. Fortunately there are plenty more jokes that work to make up for those that don't. The pony in the garage (which I won't give away) makes up for more bad jokes than there are in this movie.

This movie is practically a reunion of cast and crew from last year's Old School. They were both directed by Todd Phillips and feature Vince Vaughn, Will Ferrell, Juliette Lewis, and a Wilson (although this time it's Owen, not Luke). The big difference being that Starsky and Hutch works where Old School simply fell flat. 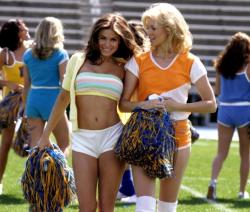 I disagree completely with Scott. Other than Carmen Electra, this movie is very flat. As I watched this film I kept wondering when the hell something funny was going to actually happen.

Stiller runs around, over playing it. I guess he may have been doing a parody of the original Starsky, but I never saw the show so how the hell would I know if he is satirizing something or just overacting?

Every scene is an obvious set up; with punch lines you can see a mile away. Gee, I didn't know it was real coke and that someone would use it! I never in a million years thought the car would miss the boat! I was sure those costumes they wore to the biker bar would never lead to anything! I was surprised by the mime outfits, but what the hell purpose did they serve? They were as dull and unfunny as the rest of the movie.

Okay, I liked Vince Vaughn, but then I usually do. He has a few good lines. My favorite of his is when he is trying to calm down his nervous assistant, he assures him that; "I promise I will not kill Terrence again."

Perhaps it would have helped to enjoy this movie if I had watched the television show? God knows it could not have made it worse.