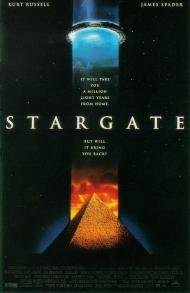 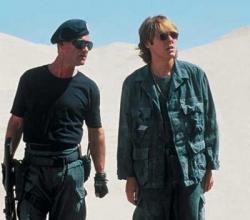 The entire premise of the movie is fascinating.

As a semi history buff, I found the theory that Ra, the ancient Egyptian sun god, was actually an alien very interesting. He had the pyramids built as a landing platform for his spaceship.

The plot is about a linguist played wonderfully by James Spader. He thinks he has been hired to decipher ancient symbols. He ends up figuring out the equation on how to activate the Stargate. The Stargate is an ancient devise created by the alien as a means to transport earthlings to another planet to slave away mining for minerals that keep him alive.

Spader is joined by Kurt Russell and a group of soldiers who go through the Stargate and eventually do battle with the alien. James Spader is terrific here. He plays a nerd excited by the whole adventure. He has several humorous scenes and even a little romance. It is his sincere performance that holds the film together.

Kurt Russell on the other hand is as dull as can be. You are supposed to feel pity for him because his child recently died. But all Kurt Russell does is walk through the film with a constant stern expression. How he has ever had such a long "acting" career is beyond my comprehension. 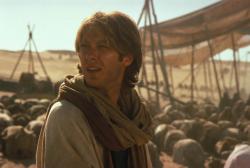 Every now and then I find myself in complete agreement with Eric's opinion when it comes to movies. It just so happens that Stargate is one such movie.

The premise is immediately intriguing and is carried through from beginning to end. And like Eric it seems, I've always found ancient Egypt to be a very interesting time period.

Eric's and my own opinion agree the strongest when it comes to Kurt Russell's character. He's supposed to be a hard ass military Col. That's all I need to know about his character. I don't need or want to know how he got that way. My first act as editor of this movie would have been to snip his opening scenes and have his first appearance be at the conference table when James Spader discovers the key to the Stargate.

Apart from this, I would have to say that Stargate is an interesting Sci-Fi movie that manages to distinguish itself from the Star Trek, Star Wars, and Alien clones into which most Sci-Fi movies can be categorized as. 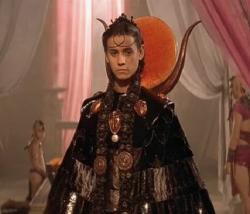 Stargate is an entertaining movie from 1994 that has many qualities of the old time studio era B pictures.

Like my brothers I found the story to be imaginative and compelling. It drew me in like an episode of Gilligan's Island and I mean that as a compliment. There's nothing complicated about it.

Eric's right about James Spader. He's very good. His Daniel Jackson is original and quirky while still retaining all the recognizable heroic traits that a hero needs.

Like Scott I enjoyed the ways the characters overcome their language barriers. That's script-writing on a level you rarely see in action movies. Simple yet effective because it rings true.

I even think Kurt Russell is fine for his role, although I agree that his introductory scenes are superfluous. I wouldn't have appreciated his relationship with the boy he befriends any less without knowing about his son. After all Jack O'Neil is really just a one dimensional stock character. Kurt Russell has the look, swagger and attitude to pull off the part. I mean give the guy a break this ain't Shakespeare.

The androgynous Jaye Davidson has fun as Ra. He slinks around like Claudette Colbert as Cleopatra but also manages (with the help of the special effects department) to be a truly frightening villian.

Stargate is an original, clever B picture. The kind of movie that Hollywood has always had a knack for even if it sometimes forgets.