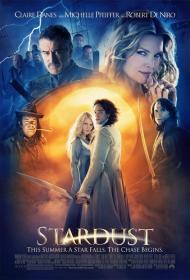 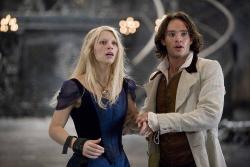 Stardust takes place a hundred years ago, or so, in a city in England named Wall. It is called that because a long wall is near by. Part of the wall is broken down and it is a gateway to the magical kingdom of Stormhold. In Wall, a shop clerk named Tristan is infatuated with the cold-hearted Victoria. To prove his devotion to her, Tristan goes on a quest through the wall to retrieve a fallen star that he and Victorian saw.

Peter O'Toole plays the dying king of Stormhold. He is acting like King Henry from The Lion in Winter. He encourages his four living sons to fight and kill each other to inherit the throne. He also sends them on a quest to get the fallen star. Also after the star is a witch named Lamia, played to the hilt by Pfeiffer. She and her witch sisters need the star to make them young again. Tristan discovers that the star is actually a girl. Together they, with the help of the cross-dressing, air pirate Captain Shakespeare, fight off the witch and fall in love.

The story's premise is all fine and dandy but there is far too much going on. The Kings sons, all seven of them, are constantly around to fight each other and generally be nuisances. Most of them are in the form of ghosts. Only one serves to actually help the plot along. Gervais will be recognized from The Office, but his part here is simply filler.

De Niro seems to be having fun as the transvestite in private/macho marauder in public Captain. His ship flies into storm clouds and collects lightning. His tough acting gay pirate provides the movies best laughs, but not necessarily because it is funny but because it is De Niro who is camping it up. The jokes would not have worked had the role been played by an actor with a lesser macho image.

Stardust is a fantastic fairytale that takes the audience on a splendid journey. It could have benefitted from a tighter script and less distractions, but it is a fun watch none-the-less. 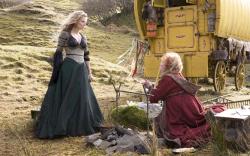 You're right about the plot Eric. Basically, the story is one long chase. The screenwriters try to cover this up by throwing in lots of distractions. The problem is they throw in far too many and not all of them work. De Niro for instance, is given far too much screentime. As you said, Eric, if it wasn't him playing that part, you lose the shock value and pretty much all of the humor.

Having said that, this is still a very enjoyable movie. Pfeiffer is great as the evil witch, stealing pretty much every scene in which she appears. Danes is also good as the star fallen to earth, and the unknown Charlie Cox is serviceable in the lead role. The script, when it's not meandering, is funny with a lot of little nice moments.

I'm a huge fan of the book this movie is based on. Its author, Neil Gaiman (writer of the Sandman comics, and author of Neverwhere and American Gods among others), is one of my favorites. The movie stays true to the general outline of the book, although ironically, it turns what is a fairly short book into what is an overly long movie. Quite a bit of the padding in the movie comes from De Niro's character, who is only briefly mentioned in the story. In the book, which is still basically a chase, you get into the character's heads and learn what they what they are thinking and feeling. This is how it breaks up the story.

The fantasy genre is probably the least respected and least well done genre in the history of movies. They're usually either aimed too much at children or just cheesy with a poorly written script. Even after Peter Jackson's Lord of the Rings trilogy and the recent resurgence of fantasy films, there haven't been many good ones. Stardust, while not perfect, is very good and joins the ranks of the few great fantasy movies. Perhaps every fantasy movie should feature Pfeiffer. She was in one of the best of the 1980s; Ladyhawke

Robert De Niro camps it up as Captain Shakespeare in Stardust.

Sometimes it’s more fun when I disagree vehemently with my brothers’ opinions and get a chance to slam their reviews. Sadly, that isn’t the case with Stardust. I enjoyed it as much as they did. It is an imaginative, colorful and well-acted fantasy. It combines gruesome action with quirky humor in an entertaining fashion. On the down side it is rather light on plot and runs a bit long as Eric and Scott both mentioned.

As much as I enjoyed Pfeiffer’s gleefully wicked turn as the witch Lamia, I thought De Niro stole the movie. His pirate captain with the gruff outer shell hiding a cream puff center is priceless. And as much as he is played for laughs, De Niro manages to bring some actual emotion to the role. I felt for him having to hide his true self from his crew and felt real joy for him when he is “outed” and discovers his crew knew all along and didn’t give a rat’s ass.

How could you not laugh when Septimus cautions his men, “Now remember Captain Shakespeare has a fearsome reputation” …cut to a scene of said Captain dressed in a frilly frock with a feather boa, painting a heart on his face and dancing the Can Can?
I also liked the gay touch during the wedding scene at the end where Captain Shakespeare winks at Humphrey and gets an inviting wink in return.

Stardust is nearly a great fantasy movie. It succeeds in taking the viewer on an exciting quest in a world filled with magical possibilities. I like how all of the loose ends are neatly tied together at the end like any good fairy tale. If only they had managed a bit tighter edit job I would be calling this a classic.