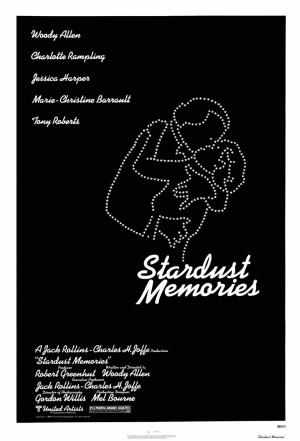 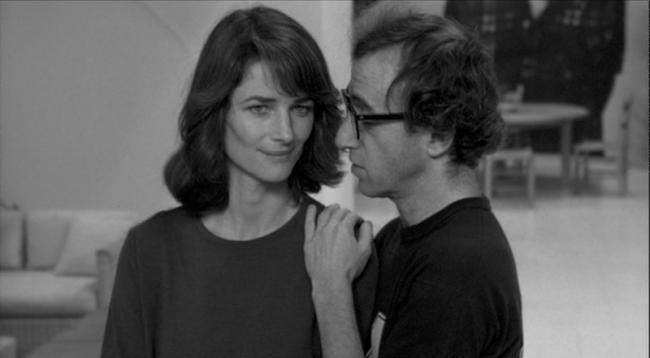 Stardust Memories is one of prolific filmmaker Woody Allen's more artistic attempts. Based loosely on Fellini's 8 1/2, Allen has denied that it is autobiographical, but it's impossible not to see it that way. It was a critical and financial failure upon its release, but has grown in stature over time and is now generally considered one of the director's better films. It's a film with serious themes, but it's also not without humor.

There's not much of a plot. Most of the film takes place over one weekend where filmmaker Sandy Bates (Allen) is attending a retrospective of his work at the Stardust hotel. He interacts with the general public, critics, studio heads, and other luminaries, all of whom agree that they liked his earlier, funny, movies better than his more recent serious ones. At the same time Sandy is struggling with women problems. He's plagued by memories of Dorrie (Rampling), a former unstable lover, while flirting with a young woman he meets over the weekend, and also contemplating committing to a serious relationship with yet another woman. During all of this, Sandy ponders life, love, and art, while wondering if there is meaning to any of them.

I'm sure one of the reasons this movie flopped is the way Allen portrays his fans and critics as idiots. This is also why, I assume, that Allen tried to distance himself from the autobiographical elements of the film. He wanted to assure audiences that this wasn't the way he saw them, but the way Sandy Bates saw his audience and critics. It's a futile denial however. Even if Allen honestly didn't intend it to be about Allen, the two characters are so similar that it's impossible to not see the connection. What softens the depiction of his critics is that as always Allen also pokes fun of himself. Sandy is pretentious (just look at his constantly changing wallpaper) and Allen is aware of that and many of the jokes are at his own expense.

There's also stream-of-consciousness elements to the film that are both a homage to and a parody of Fellini. We often slip into Bates imagination and memory, especially when he's thinking about Dorrie. Some of these moments are done for comic effect, such as when his hostility gets loose and goes on a murderous rampage.

Not everything in the movie works. Allen tries to conjure up a romantic moment with Dorrie near the film's conclusion, but the romance is never very fully developed between Bates and any of the female characters. Certainly not in any degree close to Annie Hall. The real love affair here is between Allen and Allen. There's not much room for any other characters to develop. There are also several exchanges between Bates and Dorrie that refer to father/daughter incest and flirting with an underage girl that, given Allen's later love life, come across as a little creepy now.

Over the many decades Allen has produced a wide ranging quality of work. Of all his films though, this might be the most divisive, appearing on best and worst lists. Personally, I include this in my top 10 favorite of his films.