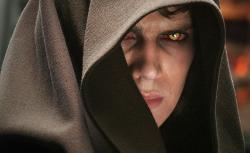 Only the most diehard of Star Wars' fans would ever claim that the first two prequels were anything but disappointments that failed to live up to their legendary sequels made over twenty years ago. And while this, the third episode chronologically, but the final episode to be produced, still fails to equal any of the installments in the original trilogy, it stands far above episodes I and II. It manages this by ditching most of the clunky love story, intricate political machinations, and annoying characters that dominated the earlier installments and puts the focus back where it belongs, i.e. onto the action and the core group of characters.

The movie opens strongly with Obi-wan and Anakin on a mission to rescue Senator Palpatine, who has been kidnapped by the cybernetic General Grievous and his master, Count Dooku (Christopher Lee). Following this opening, the story moves into the central plot, which revolves around the Emperor's final seduction of Anakin Skywalker to the dark side of the Force wherein he will emerge (as has been foretold) as the black suited, iron lunged, Darth Vader, complete with his own theme music.

Lucas, as he always does, proves himself to be a master of visuals and spectacular special effects, but is utterly unable to create a true or honest quiet moment of emotion. The movie features some stunning set pieces. There are several large-scale battles, but the best action comes in the form of one on one combat. Not only is the final battle between Obi-wan and Anakin shown in all its glory, but at long last the question of who would win if Yoda and the Emperor ever faced off in a fight, is answered.

Unfortunately, the quiet moments, those featuring Anakin and Padmé (Portman), are embarrassingly laughable. Why does Lucas still insist on writing his own scripts? And better yet, when he hears his own dialogue spoken back to him, how can he believe in it? It's a sad state of affairs because apart from these few weak scenes, Portman has very little to do. Her character has been reduced from an active participant, to the weak, stay at home pregnant wife.

One of the most surprising elements of this film is Lucas' political statement. "Any one that's not with me, is my enemy," Anakin says at one point, paraphrasing the famous line from a George W. Bush speech. "Only a Sith believes only in absolutes," Obi-wan replies. "So this is how liberty dies," Padmé points out in another scene as Senator Palpatine is laying out his new political strategy. “With a round of applause."

For the longtime fan, there are many familiar faces and elements from the earlier stories. Although much has been made of Chewbacca's appearance in this movie, his part is quite tiny and the amount of time spent on the Wookie home world, is minimal. However, there are many other moments of nostalgia. So many in fact, that by the end of the film, Han and Lando are the only major characters from the original trilogy to not have appeared in the prequels.

In Indiana Jones and the Last Crusade, Indy's dad (Sean Connery) tells him, "You left home just when you were getting interesting." That's how I feel about these new Star Wars movies. Only now, as they are ending, did Lucas manage to recapture a hint of the old magic. And now, just when they're getting interesting, they're going away. 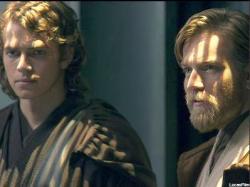 I liked this movie more than Scott, but I do have to argue a point he made. He wrote that Revenge of the Sith ditches the “...intricate political machinations..." Are you kidding Scott? The first hour and 15 minutes should have been cut to a half hour. The battle with Grievous is only in the plot for action sake, and to show that Vader is not the only person who is more Machine than man. The politics and endless yakking in the first half of the movie had me looking at my watch.

The last half of the movie, however, pays off in spades. From Anakin pledging allegiance to Palpatine to Vader's birth, I was in awe and overwhelmed. I found tears in my eyes as I watched the Jedi killed. I laughed as Yoda entered Palpatine's office. I was very emotionally engaged in this film! These characters are so familiar and you know their fates. I cannot remember the last film I watched where I felt such a gut reaction.

Scott also mentioned the politics. Sure, Lucas dismisses the claim of being anti-Bush by claiming this was all written 30 years ago. The story may have been; but the dialogue, as heard on screen, was not. Lucas's liberal politics come shining through in such statements as when Obi-Wan says to Anakin, “Only a Sith Lord deals in absolutes." Has Lucas ever heard of The Bible. It is full of absolutes. There is good and there is evil. There is right and there is wrong. Liberals see the world in shades of gray, never in absolutes.

Revenge of the Sith is a great film that completes the series. Sure, some people want more but Star Wars is all about Anakin Skywalker's seduction to evil and eventual redemption. 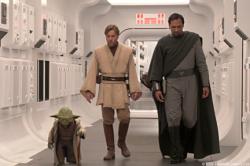 Emotionally this is the most powerful of all the Star Wars movies. I was surprised at how sad Anakin's transformation into Darth Vader was. Yes, we all knew it was going to happen but somehow I wasn't quite prepared for it. It is also the darkest and most violently graphic scene in the history of the franchise.

I agree with Eric that, after the spectacular opening sequence, the movie treads water for about thirty minutes. Once Anakin slaughters the younglings however, there is no looking back and the final hour is absolutely riveting. Lucas does a splendid job of tying up all the loose ends and showing exactly how the events of the first three movies came to pass.

As long as Eric attacked Lucas' political statement about “absolutes" I just want to add that of course there are absolutes in life, but morality can also be incredibly complex.   Maybe some simpleminded individuals would prefer it to be otherwise but alas it isn't so. Outside of fascists and religious zealots I think this is a universally recognized truth.

At any rate Revenge of the Sith is a grand conclusion to the greatest movie series in history.