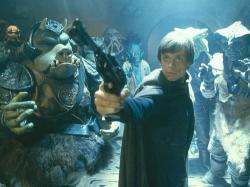 Return of the Jedi has two of the best sequences of the entire series. It also has the biggest flaw. George tries to cover too many bases and starts a bad habit.

The light saber duel between Luke and Darth is the most tense scene in the series. You have Darth attempting to turn Luke to the dark side at the same time they are battling. You have Luke who is now fully aware that he is fighting his father to perhaps the death. The moment Darth says "So you have a sister. Obi-Wan was wise to hide her from me." You know the movie just took a major step in a new direction as did this scene. Darth continues his dialogue with "If you will not turn to the dark side, then perhaps she will." To which Luke comes out of the shadows mad as hell and begins for the first time to beat Darth. However, he is now angry and with anger comes the dark side. So we have several things going on here. Luke is winning the fight but Darth is also winning because he has made Luke mad and thus shown him that the dark side can make you very powerful.

The other great part of this movie is the space battle that is going on at the same time as the light saber duel. Lando is leading the rebels against the new death star. There are more fighters and starships in this scene than in earlier movies and it's quite a workout on your eyes trying to watch all the action at once. The scene actually gets even better when the Millennium Falcon enters the super structure of the Death Star and seeks out its power source. The camera moves with the ships and the effect is that you feel more like a participant than an audience member.

Where George drops the ball in this movie is with those damn Ewoks. What could have been a planet full of Wookies and some great depth to Chewbaca's character became an unfunny joke. The Ewoks are a bunch of teddy bears dressed like cavemen. They carry spears and throw rocks. So obviously the armor wearing, laser gun touting Stormtroopers are no match for them. The fact that the two previously mentioned great scenes are interspersed with these stupid scenes of prehistoric telly tubbies beating up an army of Stormtroopers just acerbates the ludicrousness of it all.

A great movie, but Lucas should have kept in mind that is wasn't a bunch of 6 year olds that made the first two movies the phenomenon they are. 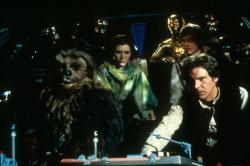 May 25th, 1983 12:01 AM
A date and a time that will live forever in my heart. I'd just spent the better part of three hours waiting in line to be absolutely sure of seeing this, the (at the time) final chapter in the Star Wars saga. Never before, and not yet since, I have been so eager to see a movie. It was anticipation of the sort only a child can experience. It was my birthday, Christmas Morning, and the last day of school all rolled into one. It was, in one word, magical.

I'd been waiting, along with millions of other fans to see what would become of Luke, Leia, and my favorite; Han. When last we'd left our heroes, Han was frozen in carbonite, sold to the evil Jabba the Hut. Luke's hand had been chopped off by Darth Vader, who now claimed to be his father! The rebellion was in tatters, it's fleet now gathering, but without a home base. Never had such a blockbuster movie ended with such a cliff-hanger! An entire generation now had to wait to see the finale to a movie trilogy with which we'd grown up.

When the curtain parted in front of the screen (they still had curtains in some movie theatres in those days), and the familiar 20th Century Fox logo appeared with that music (My god that music! buh-bum, buh-bum, buh-duh-duh-bum-bum, deh-deh-daah, deh-deh-daah, deh-deh-deh-deeeh I still get chills), and then those words appeared. Those words that were emblazoned upon the minds of a generation with such intensity as to make you ask, "Harry who? A sorcerer's stone? What the hell is that?" We didn't need a sorcerer's stone, we had The Force. The words were, of course, (everybody say them with me now) "A long time ago, in a galaxy, far, far away..." The crowd in that movie theatre went wild, as did I. We were all of one mind that night.

Soon we were all lost in the story. The plot of Return of the Jedi moves along faster than the Millennium Falcon. From the opening scene of Darth Vader convincing the Imperial Commander to redouble his efforts in the construction of the New Death Star, informing him that the Emperor himself will be coming soon, we are led to Tattoine, where a newly matured Luke sets about rescuing Han. It is here in Jabba's palace that we hear one of my all time favorite lines from the series. (Han: "Luke, how we doing?" Luke: "Same as always." Han:"That bad, huh?") After the rescue, and a short detour over to Dagobah for Yoda's death scene, we are taken to the main thrust of the plot which is the rebels discovering that the emperor will be aboard the New Death Star, and their decision to take out two birds with one stone and destroy both him and it together. This of course, leads up to the triple-whammy climax, which Eric referred to, and the final conclusion to the original Star Wars trilogy.

What would have been my review that night, if someone had asked me as I left the theatre? Probably something highly articulate like "Awesome!", or "Wow!". I certainly lacked the vocabulary and the perspective to realize that the night I saw that movie was in many ways the culmination of my childhood and would influence my tastes, personality, and even future relationships in the years to come. Sound a little too dramatic? Well, it may be, but it's also true.

Now, after having seen the movie, god knows how many times, I can look at it and tell you it's weaknesses and it's few flaws. Like Eric, I dislike the Ewoks, but certainly not to the extent that he goes on about them. The two biggest weaknesses that I feel this movie has, is the lack of romance between Han and Leia, and the way that the evil Lord Vader turns good at the last minute.

In The Empire Strikes Back, which is certainly the most adult of the films, Han and Leia share a few nice scenes aboard the Falcon where you can feel the sexual tension. In Return of the Jedi Han and Leia act more like brother and sister than Luke and Leia do. When Han kisses Leia at the end of Return, there's less sparks than a soggy match struck against a sponge.

As for Vader, I know that the point is supposed to be his redemption, but I just loved his evilness so much that it seems a shame for him to totally wuss out like that. Here he is, the villain of my childhood, the sinister breathing, the black armor and flowing cape, and then suddenly, he's just this middle-aged, slightly overweight guy with a head like humpty-dumpty! At least Lucas did us the favor of killing Darth Maul before we found out that he delivered food to orphanages in his spare time.

Apart from those trifling complaints (I mean who watches the Star Wars movies for romance anyway?), this is a great movie. It features one of the greatest scenes of any of the trilogy, the battle between Luke and Darth that Eric mentioned. It introduced us to, the dripping with evil, Emperor. (Who can forget his classic line, "Oh, I'm afraid the deflector shield will be quite operational when your friends arrive.", spoken with sarcasm just oozing out of every pore.) And featuring a space battle, which Eric also mentioned, that has yet to be topped.

A classic movie and one that I will always hold dear to my heart. 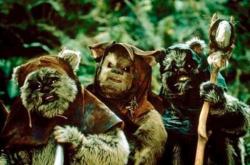 The Ewoks in Star Wars: Episode VI Return of the Jedi.

There isn't much left for me to add about the third Star Wars movie. It does a great job of concluding the original trilogy and showing the inevitable defeat of the empire by the rebel forces.

I remember seeing it with my brothers and loving it. I even liked the Ewoks. The way they defeat the storm troopers is inventive and entertaining. The scenes of the stars riding those flying motorcycle-type machines (I don't remember what they are called) through the trees is the image I always associate with this installment.