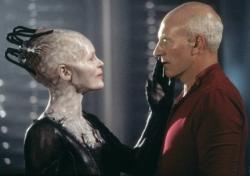 The even numbered Star Trek theory certainly holds true with this one.  Star Trek 8: First Contact, is far superior to Star Trek 7 and is easily the best Star Trek film to feature The Next Generation cast.  This should have been their first filmed adventure rather than the botched attempt to combine them with the original series actors in Star Trek VII: Generations.  It combines action with humor and highlights Star Trek's greatest villains since the Klingons, the Borg!

This isn't a movie that wastes a lot of time on back-story.  It jumps right into the action when we learn that the Borg (a race of cybernetic beings) are invading Federation space.  Before the Enterprise helps to destroy the Borg ship, a smaller Borg ship breaks away and goes back in time to conquer the Earth in the past.  The Enterprise follows and learns that the Borg have returned to 2063, the year that humanity made first contact with an alien race.  If they can  prevent First Contact, the Borg will stop the Federation from forming.

The plot then splits in two.  On board the Enterprise, Picard and Data must deal with an invasion of Borg who are seeking to take control of the ship, while on the Earth, Riker and his team must help Warp Drive inventor Zefram Cochrane make the maiden voyage of the first warp capable ship so that he can meet the Vulcans and keep history on course.

Splitting the story up in this way allows this movie to be both funny and dark.  On the planet, Riker, Geordi and Troi get some lighter moments as they learn that Cochrane, who is revered in their time, doesn't quite live up to their idea of him.  Troi in particular gets an amusing drunk scene.  These lighter moments break up the heavy drama as Picard faces the Borg and his inner-demons, while Data is flirting in a macabre way with the Borg Queen.

Like the most successful of the original Star Trek films, this movie was directed by a cast member.  This time by Jonathan Frakes.  He is definitely a part of why this movie is so good.  As the very first Star Trek movie showed, you can't just get any director to make one.  Nimoy and Frakes both knew their shows and their cast inside and out and therefore they knew what to highlight and what tone to set.  Reportedly Frakes' nickname on set was 'Two-Takes Frakes' due to his economy and speed when filming.  This quick pacing certainly carries over onto the screen.

Although I love this movie and it is one of my favorite of all the Star Treks, I do have a couple of minor complaints.

The scene where Picard lures two Borg into the holodeck seems silly.  I know the holodeck scenes were a staple of TNG, but it seems out of place here.  Surely they could have come up with a better way for Picard to get what he wanted.

My other complaint is that while I think Alfre Woodward does a good job in her part, why weren't her lines given to a regular castmember?  She spends most of the movie tagging along with Picard and is given the big moment when Picard realizes how obsessed he's become.  Why couldn't  Dr. Crusher have been given those lines?  She's always been the most underused of the TNG characters, so why not give her more to do?  It seems like a wasted opportunity.

The problem with most of the Next Generation Star Trek movies is that they feel like extended episodes of the television show.  First Contact is the one time that it really feels like they made a Movie, with a capital M.

As Scott wrote, Star Trek VIII: First Contact does not waste time on a back-story. This is not a plus if you have not seen the The Next Generation television show. Because of Scott, I have some passing knowledge of it and have seen the episode in which Picard was assimilated into the Borg. If you have not, he briefly explains it later in the film, but it certainly helps in watching this film having seen that particular episode.

With that said, this is otherwise the most accessible of all Star Trek: The Next Generation films. It starts right in with the action and only slows down for some mild humor and character interplay. Every cast member gets at least one moment to shine. Scott mentioned Data flirting with the Borg Queen, while I liked an excited Geordi meeting his hero. When Riker finds Troi, she has been drinking. "I'm just trying to blend in!" she explains to Riker, who notes, "You're blended all right."  I also enjoyed Woodward's running "Swedish" joke.

Picard is clearly the star with the most screen time. His history with the Borg gives the film its emotional center. However, Stewart misreads an important line. When Woodward tells him to blow up the ship, Stewart yells back, "I will not sacrifice the Enterprise. We've made too many compromises already; too many retreats. They invade our space and we fall back. They assimilate entire worlds and we fall back. Not again. The line must be drawn here! This far, no further! And I will make them pay for what they've done." He should have sounded more authoritative and determined and less like a frustrated whiny child throwing a fit.

The literary Picard goes on to quote Melville's "Moby Dick", but my favorite line of his is a variation on a Mark Twain quote, "Reports of my assimilation have been greatly exaggerated." Twain originally said, "The report of my death was an exaggeration," First Contact has many good lines. My personal favorite is when Cochrane says, "So you're all astronauts on some sort of... star trek?" It is the only time I am aware of the words, "star trek" being spoken in a movie or television show, but then again I am not an authority on the subject.

Star Trek VIII: First Contact is the most enjoyable of the Next Generation films and should have been an example for all to follow. If you are a Trekkie fan, the contact scene alone is worth the watch. If the producers had continued to make this kind of Star Trek film we may still be seeing Picard and company exploring strange new worlds on the big screen, but alas... 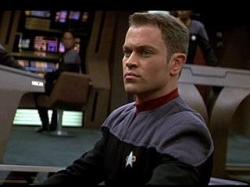 I've never seen the episode of the series where Picard is assimilated into the Borg. In fact, I'd never heard of the Borg race until I watched this movie. I must say they make very formidable villains with their emotionless hive behavior and ability to adapt so quickly to any weapon. Alice Krige is good as the equally sinister and sensual Borg Queen. Her scenes with Data are some of the best in the movie. “Brave words. I've heard them before, from thousands of species across thousands of worlds, since long before you were created. But, now they are all Borg.”

As my brothers wrote, the script (like any good script should) balances serious tension with more lighthearted moments. James Cromwell steals his scenes as the reluctant icon Dr. Zefram Cochrane. This rock-n-roll loving rocket-scientist is a great character. His reaction when he learns just how revered he will be by future inhabitants of the universe is memorable.

Riker tells him, “Someone once said "Don't try to be a great man. Just be a man, and let history make its own judgment."” Cochrane responds, “That's rhetorical nonsense. Who said that?” Comes the reply, “You did, ten years from now.”

In another amusing moment he tells La Forge, “I've gotta take a leak.” La Forge: “Leak? I'm not detecting any leak.” Cochrane: “Don't you people from the 24th century ever pee?” I'm not a trekkie but according to the IMDB this is a humorous reference to the fact that toilets are never shown on the series.

The relationship between Lily and Picard is well done. It didn't seem out of place to me that she is the one who convinces Picard to abandon the Enterprise. In nearly every episode isn't there a new character that plays a pivotal role in that week's mission? Their conversations about Moby Dick and Picard's blind obsession for revenge against the Borg are interesting and thought provoking.

One bit of trivia I discovered about this movie is the fact that Lt. Hawk, played by Neal McDonough (see photo), was originally intended to be the franchises' first ever openly gay character. Apparently this idea was nixed as any references to his sexual orientation were dropped from the finished script. However, in the Star Trek tie-in novel Section 31: Rogue it was confirmed that Lt. Hawk is in fact gay.

According to this movie, humanities' First Contact with an alien race will take place on Thursday, April 5, 2063. That's just 50 years from next Spring. Whether or not it proves prescient, I hope Three Movie Buffs is still around to witness that day. We will all be in our 90s then, so it's entirely possible. With any luck we will all still be watching and reviewing good movies like Star Trek VIII: First Contact.