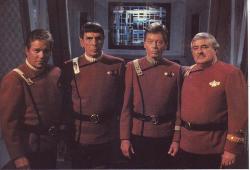 William Shatner, Leonard Nimoy, Deforest Kelley and James Doohan make one last journey together on board the Enterprise in Star Trek VI: The Undiscovered Country.

Where Star Trek V seemed to be a stand-alone episode with no real connection to the other films, Star Trek VI gets back on track and seems a natural progression from the previous movies.  If The Undiscovered Country could only have followed The Voyage Home instead of the dreadful Final Frontier, Star Trek's II through V would have been an unbroken series of entertaining movies.

Many of the original series plotlines mirrored current events and the Klingons obviously represented the Russians, in the same way that the Romulans were always representative of the Chinese.  It seems natural then that when the cold war ended in real life that the cold war between the Federation and the Klingon empire should likewise end.  And that it should be the final plotline for the original series crew of the Enterprise seems as logical.

Despite being hampered by a lower budget (punishment from the studio for the failure of Star Trek V), writer/director Nicholas Meyer (who also directed and co-wrote The Wrath of Khan) manages to create an entertaining movie that is a return to Star Trek form.  Clearly an effort was made to create a more serious and darker tone than the previous outing, but without losing any of the warmth and camaraderie we've come to expect from these characters.

The plot tells of how following a Chernobyl-type disaster on a Klingon moon, it is revealed that the Klingon Empire is in serious trouble and wishes to negotiate a dismantling of the Neutral Zone and an end to all hostilities.  Kirk and company are sent to escort the Klingon Chancellor to the Earth for a Peace Conference.  When the Chancellor is assassinated, it is Kirk who is blamed and put on trial by the Klingons.  It's up to Spock and the crew to uncover the true murderer and ensure that the peace process won't be halted before it's begun.

Reportedly William Shatner and Gene Roddenberry didn't like it that Kirk was portrayed as prejudiced against the Klingons.  They couldn't have been more wrong.  Kirk's feelings towards the Klingons are at the heart of the movie.  It's hardly surprising that he would bear a grudge against them since his son was murdered by Klingons and he has faced off against them for almost his entire career.  It is his prejudice that gives the movie its tension.

Even though Star Trek is rarely about defeating a bad guy, it helps to have an adversary for Kirk to play off of.  This time around the villain is played by Christopher Plummer.  His Shakespeare quoting General Chang provides a great foil for Kirk, especially during the dinner scene.

The addition of Kim Cattrell as a Vulcan never quite worked for me.  Originally the character she plays was to have been Lt. Savik from Star Trek's II and III, but Roddenberry objected to the use of that character in this role, which is a pity as having someone already established in the Star Trek Universe perform her character's function would have given it further weight.

There are also a couple of cutesy scenes thrown in again this time around such as when Uhura has to respond to a Klingon over the Communicator and the entire crew rummages through some books trying to find the correct translation.  In the first place, why are there books?  And secondly, even if the universal translator would be recognized, it could still have told Uhura what to say and she could have repeated it.  Also, would it have hurt to finally give Uhura something serious to do since this was to be her last appearance?

Although several of the crew would show up in later films and episodes of the various Trek incarnations, this is the last of the Classic Trek stories ever put to film.  This knowledge makes the ending seem rather bittersweet, but it is a fitting one.  As Sulu says at the end of the movie, "Nice to see you in action for one last time, Captain Kirk." 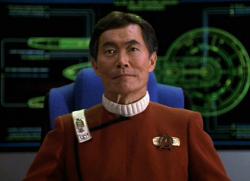 Thankfully the original cast reunited one last time for The Undiscovered Country in 1991 (the 25th anniversary of the original television series). It would have been a shame if The Final Frontier had been their final movie together. Several cast members would show up later in Next Generation entries and/or the rebooted franchise but this marked the final feature film appearance for DeForest Kelley as Bones, Nichelle Nichols as Uhura, and George Takei as Sulu (although the latter two would reprise their most famous roles in video shorts as well as lending their voices for various Star Trek video games over the years).

The Cold War analogy is timely and well-done. The two other things this movie is probably most remembered for are its plethora of twentieth century cultural references and its take on race relations. The two often going hand in hand, such as the line, “Guess who's coming to dinner.” in reference to the Klingons. A line that was originally intended to be spoken by Uhura. When Nichelle Nichols refused to say it, it was given to Chekov instead. Other examples are Spock's line, “There is an old Vulcan proverb: only Nixon could go to China.” and this exchange between Chang and Kirk. General Chang says, “"To be or not to be?" That is the question which preoccupies our people, Captain Kirk. We need breathing room.” Captain Kirk's terse reply, “Earth, Hitler, 1938.”

As Scott mentioned, Christopher Plummer's General Chang spouts many lines from Shakespeare including a condensed version of the Bard's most famous statement on prejudice from The Merchant of Venice. “Tickle us, do we not laugh? Prick us, do we not bleed? Wrong us, shall we not revenge?” We are also informed that, “You have not experienced Shakespeare until you have read him in the original Klingon.”

Brock Peters (who was cast partly because of his iconic role as Tom Robinson in To Kill a Mockingbird) had a hard time delivering his vitriolic speech near the end of the movie. He was so bothered by it that he couldn't finish it in one take. I agree with Scott about Kim Cattrall's character Lieutenant Valeris. As a Vulcan she is quite annoying. I also wondered what the hell Christian Slater was doing popping up in a cameo until I read that his mother was the casting director.

I've never been the fan of Star Trek that my brother Scott is. I didn't see any of these movies when they were first released. I've enjoyed catching up on the voyages of the Starship Enterprise, and The Undiscovered Country is a fitting conclusion to the original series cast. It ends with one last pop-cultural reference. In response to Chekov's query, “Course Heading, Captain?” James T. Kirk quotes Peter Pan, “Second star to the right and straight on till morning.” 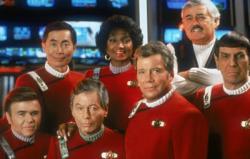 Star Trek VI: Undiscovered Country is not a film you want to see if you have not watched the series or earlier films. To fully understand and feel the impact of what is happening here you must have some running knowledge of the Star Trek universe. I was pleased to read that my brother Patrick, who is not a big Star Trek fan, was still able to appreciate what is happening here. Like him, I enjoyed all the pop cultural references. My favorite was Chekov and the Cinderella mention.

As Scott wrote, the heart of the film is, “…the warmth and camaraderie we've come to expect from these characters.” Like him, I loved the dinner on the Enterprise with the Klingon guests. The awkward subtleness of the scene can only be fully appreciated by fans who have long invested time in watching Kirk and crew deal with their hostility with the Klingons over the years.

Scott noted that Roddenberry objected to a couple of ideas here that he was completely wrong about. Like George Lucas and Star Wars, I think Star Trek had out grown him. Sure, he created the universe and the characters that inhabit it but Star Trek has long taken on a life of its own. Like Star Wars, Star Trek is owned by the fans. The film makers are merely temporary care takers.

These movies shine when the characters act as we expect them to. What Star Trek fan does not smile when Kurt confesses, “Occasionally I have disobeyed orders.” We expect no less than when Spock asks Scotty how long it will take to fix an undamaged warp drive and Scotty answers two weeks, so as to stall a return to port.

Where the movie missteps is when it fails to remember just how old these folks are. When in prison Kirk fights a big alien and wins, of course. Then he gets to flirt with a hot alien chick (Iman).  Yeah, we expect no less from Kirk but at this age, who is he kidding?

Star Trek VI: The Undiscovered Country is hardly a perfect film. Why the Klingon ship gets attacked is obvious. Still, it treats the characters how we have come to expect, making for a great final visit with them.