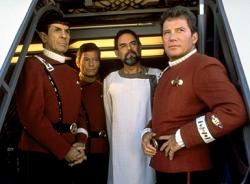 Star Trek V: The Final Frontier (or Shatner's Folly as it's sometimes known), is generally tied with Star Trek: The Motion Picture for least favorite of all the original cast Star Trek films.  They're the origin of the belief that the odd-numbered Star Trek films are worse than the even-numbered ones.  What's interesting about comparing Star Trek I to Star Trek V is that they're both bad for exactly the opposite reasons.  The original film had great special effects but was too dark and serious without enough character interaction, while The Final Frontier has some pretty shoddy special effects and is too light in tone and actually features too much character interaction without enough substance behind it.

Following the success of Star Trek IV, which was directed by Leonard Nimoy, William Shatner was given his turn behind the camera.  And although most of the blame for its failure was laid on his doorstep, to be fair he was hampered by studio interference and a stingy special effects budget.  It isn't so much his direction that's poor, but rather his story idea and the script.

The idea behind the plot is rather grandiose. A Vulcan from Spock's past takes control of the refurbished Enterprise with the intention of taking it to the center of the galaxy where he believes they will meet God.  There's also a subplot with a Klingon ship trying to track down the Enterprise, but it doesn't really go anywhere except to show up at the 11th hour and provide a too easy ending for it all.

While the best of Star Trek has always blended drama, action and a bit of humor; the balance is tipped too far in the humor direction here.  Spock flying around on rocket boots (with some really bad special effects) is just silly.  Scotty knocking himself out by walking into a low doorway is slapstick.  And Spock, Kirk and McCoy singing "Row, Row, Row Your Boat" around a campfire is better not even mentioned.  There are also too many unintentionally funny scenes, such as Uhura doing a naked fan dance to distract some guards (which reportedly the screenwriter only suggested as a joke, but was stunned when the producers leapt at the idea), and when the movie opens and you see a young, strong stuntman climbing a cliff face only for the camera to zoom in and reveal in closeup that it was supposed to be aging, overweight William Shatner.  And Grandma Uhura flirting with Grandpa Scotty is just wrong on every level.

One of the great things about Wrath of Khan (the gold standard of Original Series movies) is that the characters are all playing their age.  It plays a part of the story.  Here though, when it is glarlingly more obvious how old they all are, it is never mentioned.  Kirk is still running around trying to do the action stuff.  Just why when they go down to try and free some hostages Kirk takes a frail looking McCoy and a not much better looking Spock, is never explained.  These are all senior officers (and senior citizens), why are they still doing the grunt work?

The most bothersome plot element to me has always been the Great Barrier scene.  God supposedly lives on a planet at the center of the Galaxy that is protected by the Great Barrier.  Repeatedly we are told that no one can pass through the Great Barrier.  People have tried, but no ship or probe has ever returned.  It's built up as this massively dangerous thing to do, so by the time they get there you're thinking, "My god, how the hell are they going to get through that!"  And then it turns out to be nothing more than a laser light show.  The Enterprise sails right through without damage and so does the Klingon Bird of Prey.

Star Trek has never been afraid to confront serious ideas.  Here they're dealing with the issue of God.  A subject that has been debated by man since the dawn of time.  Surely there's plenty to say about it.  The best this script can do is have Kirk, when told by McCoy that he and Spock were just discussing whether God really is out there, glibly say, "Maybe he's not out there, Bones.  Maybe he's in here," and then point to his chest.

Despite some fun moments Star Trek V really comes off as a parody of itself.  Shatner has been lobbying to be allowed to do a director's cut of this movie with improved digital effects inserted.  I don't suppose it could hurt, but unless he can also digitally insert a new script, I don't know how much it will help. 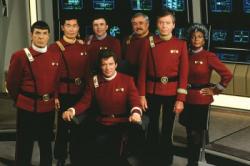 The seven iconic crewmembers of the Starship Enterprise in Star Trek V: The Final Frontier.

While I agree with Scott that this is the weakest movie in the original Star Trek cast franchise, it isn't without some entertainment value. There's plenty of humorous camaraderie between the seven iconic crew members of the USS Enterprise (see photo). Their lighthearted bantering is easily the best thing The Final Frontier has going for it. Scotty, Chekov, Uhura, and Sulu each get a moment or two to shine, while Kirk, Spock and Bones spend lots of quality time together at the heart of the story.

One of the funniest moments happens near the end. A relieved Kirk moves to hug Spock, who stops him and says, “Please, Captain, not in front of the Klingons.” We even get a bit of extra insight about Spock and Bones. Sybok forces both men to revisit painful memories in their lives. Bones sees himself at his dying father's side, unable to heal him, and Spock watches himself being born and witnesses his Vulcan father's disappointed reaction at the sight of his half human infant. Who knew these guys had daddy issues?

While there's campy fun to be had in watching Spock fly around on rocket boots or Uhura doing a naked fan dance, what really brings Final Frontier down is the horribly disappointing ending my brother wrote about. Due to a writers strike in Hollywood the original climax was truncated by a slashed budget. As Scott mentioned the resulting ending features, to say the least, underwhelming special effects. I also agree that the subplot with the Klingons goes absolutely nowhere and is there simply to provide a convenient way to neatly and efficiently wrap up the plot.

From the title to that last scene around the campfire everything about this movie seems to suggest it was planned as the final feature film voyage of the original cast. In a way it was. Although they would all reunite one last time for 1991's Star Trek VI: The Undiscovered Country, this was the final voyage of the Starship Enterprise with all seven original series crew members, Kirk, Spock, Bones, Scotty, Chekov, Uhura, and Sulu, onboard. In Undiscovered Country Sulu is no longer working as a crew member on the ship.

Scott makes a valid point about their ages. Although Shatner looks young for his (both he and Nimoy were 57 at the time), the scene where he is supposedly free-climbing the sheer cliff of El Capitan in Yosemite National Park is patently ridiculous. In the long shot it is so obviously a stuntman doing the actual climbing, while Shatner's scenes were filmed on a set built in a parking lot overlooking the valley.

Earlier in the movie Kirk and Bones try teaching the song “Row, Row, Row, Your Boat” to Spock. My brother may not have enjoyed it but it's quite funny, with Spock trying to comprehend the meaning of the words and an exasperated Bones stating that he liked Spock better before he died. Shatner revisits this for the memorable final shot; Kirk, Spock and Bones singing around a campfire with the smoke from the fire rising up through the trees towards the star-filled night-sky. 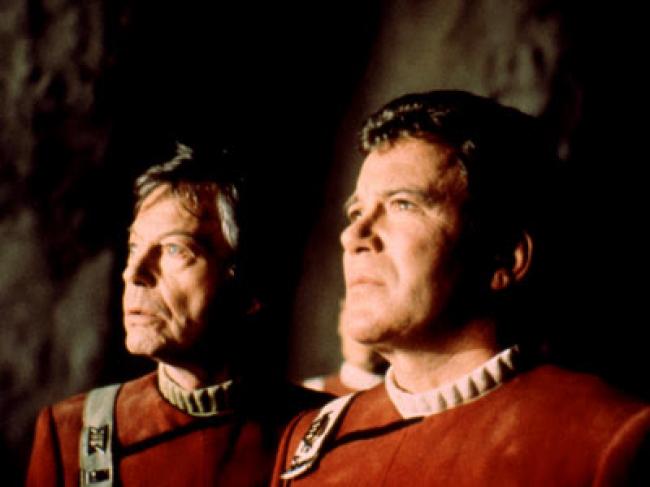 Like Scott, I was a bit distracted by William Shatner's desperate attempt to make himself appear younger than his actual advanced age. His toupee is obviously not his real hair and was I the only one who thought he was wearing too much tanner and makeup? I chalk this film up as a complete vanity piece for William Shatner.

Shatner gave himself lots of screen time and plenty to do but, as Patrick mentioned, all of the cast get at least a moment or two. Scott did not like Scotty’s pratfall but it is my favorite moment as it happens just after he says, “I know this ship like the back of my hand.” Uhura’s fan dance is however, best forgotten, not because of anything Nichelle Nichols does exactly, it is simply that the scene makes absolutely no sense whatsoever. “I always wanted to play to a captive audience.”

McCoy and Spock spend pretty much the entire film together and often in the company of Kirk. The three are the heart of the film, as they have always been, but their time spent together is not fully taken advantage of. Their single best three way exchange happens when a perturbed Kirk says to Spock, “I oughta knock you on your goddamned ass!” This causes the literal Spock to respond, “If you think it would help.” McCoy jumps in with, “Do you want me to hold him, Jim?”

This film may have worked had it simply been going for humor, and I am not completely sure it wasn’t. As Scott noted, the plot seems to be going for something dramatic and grandiose. Kirk, Spock and McCoy meet God, or an impersonator. Nothing gets passed James Tiberius Kirk. After God tells them he is going to use the Enterprise to leave the planet, the sharp witted Kirk asks with all seriousness, “What does God need with a starship?” Shatner says it as if he is asking why an all-powerful God lets evil exist. As soon as the, would be, deity tells them he needs their ship Kirk should have started walking backward saying something like, “No problem, let us go up to the ship and make sure your room is ready.” and then got the hell away from that planet.

Star Trek V: The Final Frontier is a mess and the blame may not all be Shatner’s fault but had he focused as much on the plot as he did with how the camera made him look, he may have come up with a better film.