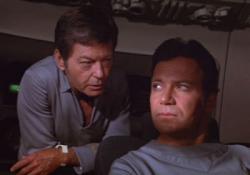 The very first Star Trek film is often maligned and it is far from a perfect film.  However, after rewatching it for the first time in many years, I was surprised to discover just how much of it was actually pretty good.  This isn't a movie that's horrible by several light years, it could have reached entertaining on mere impulse power and a slice or two of footage with a phaser.  And unlike the recent Star Trek reboot, this movie stays very true to Gene Roddenberry's original vision.

In the mid-seventies, thanks to a resurgence of interest in science fiction and strong lobbying by fans, there was talk of reviving the Star Trek franchise.  The only question was whether to revive it on the small screen or on the big.  Reportedly it was the success of Star Wars that prompted Paramount to scrap plans for a new series and work the ideas for a pilot into a large scale film.

A conscious decision was made by Roddenberry and others to make this movie different from Star Wars.  There would be no true bad guy to battle.  The only time a weapon is fired is to blow up an asteroid.  Instead, the plot involves Kirk, now an Admiral returning to the Enterprise to investigate a mysterious object approaching the Earth and determine whether or not it's a threat and to stop it if possible.

It is the script that is often unfairly blamed for the movie's failure.  It was written and rewritten many times.  Reportedly the ending wasn't known when filming began.  It has also been accused of being a rip-off of the original Star Trek series episode, "The Changeling" (prompting some Trekkie wags to say about this movie that "It boldly goes where Nomad has gone before", since Nomad was the name of the probe in the episode).  Despite all the problems with it though, it's not the script that cripples this movie.

Two large problems with this movie are its plodding pace and its love affair with its own special effects shots.  You could probably edit this movie down to 90 minutes without losing a single line of dialogue.  There are way too many scenes of the crew standing around and staring at view screens or out port holes.  I mean, yeah it's great to see the Enterprise and it must have really been great to see it when the movie was first released, but do we really need such a long tracking shot as Kirk flies to it in a shuttle?  And how many shots of V'ger do we really need?  Apparently since this was the most expensive movie ever made at the time, the producers wanted to get their money's worth on the screen.

The heart of the original Star Trek has always been the relationship between Kirk, Spock and McCoy and not the special effects.  They're the reason the show is so beloved and why during the initial run the show could get away with cheap sets and low budget special effects.  It was the good natured arguing between the logical Spock and the emotional McCoy and the level headedness of Kirk to mediate between them that was soul of the show.

Rightly or wrongly, since I'm not sure how much freedom he was given, I place the blame on director Robert Wise.  He sets a dark tone and a slow pace that undercuts the movie.  There are a few moments of banter with McCoy and Spock, but they're played so deadly serious as to be ineffectual.  Kirk seems angry and depressed here and is never allowed to Shatner out with melodrama.  Wise admitted to not being a fan of the original series, which wouldn't be a problem except that he never seems, as evidenced by the finished film, to grasp what made it so special in the first place.

Despite the many problems, there is the germ of a good idea buried in the heart of this movie.  There's just too many superfluous elements surrounding it.  Thankfully there were enough Trekkies who supported this movie anyway so that the far superior Wrath of Khan would follow. 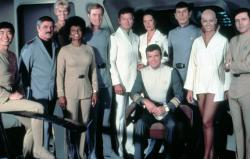 The gangs all here!

Yeah, Robert Wise thinks he's directing 2001. Everything is done with such grandiosity. Those long tracking shots with their swelling musical orchestrations really slow the plot down, which is a shame since the actual story is quite compelling. In fact Star Trek: The Motion Picture was much better than what I had always heard it to be. A faster pace and a slightly less serious tone and I would have given it four stars.

The camaraderie and chemistry between the old cast was still there more than a decade after the last episode of the television series had wrapped. Watching them reunite as the familiar faces show up one by one during the movie's first half is a genuine pleasure. But, as Scott said, the humor of the later movies is mostly absent. And some of the dialogue now seems anachronistic for technology that is supposed to be several centuries more advanced than our own. One of the few jokes is also the most dated. When Kirk asks Bones if the new medical facilities meet his approval, comes the grumpy reply, “They do not. It's like working in a damn computer center.” What sounded futuristic in 1979 now sounds hopelessly quaint.

Once the cast reunites aboard the Enterprise the central plot is a good one. I was intrigued by this enigmatic villain, a living machine. Although Scott is right that it isn't a bad guy in the traditional sense of the word it does pose a serious threat to humanity. The script toys with the idea of just what constitutes “Life”. This machine refuses to acknowledge carbon based life-forms as legitimate entities with an inherent right to exist. Somehow Kirk and company must convince it otherwise before it's too late. The conclusion ties in human history from our era in an interesting manner. All in all it's a fairly satisfying watch although it does at times move at a snail's pace.

Superfluous elements and a snail’s pace indeed! There is so much that should have been cut, especially at the beginning. Star Trek: The Motion Picture should have started with Kirk and Scotty arriving on the USS Enterprise where he immediately addresses the crew about their mission and covers the fate of the Klingon Birds of Prey. It would have saved lots of time and Paramount Studios a ton of money.

Then Skip to McCoy’s arrival where we get a glimpse of the old show’s charm with a scene of him acting grumpy while Shatner over acts. Kirk teases Bones, “Well, for a man who swore he'd never return to the Starfleet...” Which encourages McCoy to bark, “Just a moment, Captain, sir. I'll explain what happened. Your revered Admiral Nogura invoked a little-known, seldom-used "reserve activation clause." In simpler language, Captain, they DRAFTED me!”

I like the conflict between Admiral Kirk and Commander Willard Decker. Kirk wants command of the Enterprise and has the rank to demand it. “I'm sorry, Will.” Kirk apologizes after delivering the news of him taking over command. Decker does not take it at all well, “No, Admiral. I don't think you're sorry. Not one damned bit.”

The relationship between Commander Decker and Lt. Ilia is a nice addition. Persis Khambatta is the hottest bald chick I have ever seen. Usually it was always Kirk who had romantic entanglements but apparently the writers felt he was too old for it so they added a younger male character. Compared to later Star Trek films, the cast all looks relatively young and slim. Uhura still had all the right curves to fill out her Star Fleet uniform.

Star Trek: The Motion Picture has some things to offer. Most importantly it is the reunion of the cast that makes this at all interesting. Scott noted that this was similar to an episode from the television show, which makes sense as this plot is more suited to an hour long episode than a two hour and twelve minute film. I liked the little twist ending that ties it to real history but it is not enough to make up for all of the plodding and padding that has come before it.