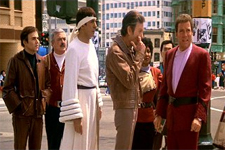 The Enterprise crew are fish out of water in San Francisco, circa 1986.

One of the great things about Star Trek, in all of its various incarnations, is the way that it has been able to mix humor with drama. Some episodes of the series could be quite dark, while others would be quite comical. With the movies, Star Trek III: The Search for Spock had a darker tone, while Star Trek IV: The Voyage Home is one of the lighter hearted of all the Trek movies and is also one of the best.

Picking up immediately after III left off, Kirk and his crew, with the newly resurrected Spock among them, are on Vulcan preparing to return to Earth to face the consequences from defying orders, stealing the Enterprise and going to the Genesis Planet. However, before they can get to the Earth, a space probe of unknown origin begins transmitting a signal towards the Earth's Oceans that disrupts all power supplies in its path, putting the Federation in grave danger. Spock quickly discovers that the signal is similar to the song of the now extinct Humpback Whale and he comes up with a plan to deal with it. In the words of Dr. McCoy, "You're proposing that we go backwards in time, find humpback whales, then bring them forward in time, drop 'em off, and hope to hell they tell this probe what to do with itself!"

The movie really gets going when the Enterprise crew arrives in the past and must deal with San Francisco in the 1980s. They discover a couple of whales in an aquarium that seem ideal, but there are several complications that they must overcome along the way.

One of the things that makes this one of the best movies of the Trek series is that all of the crew members have something to do in this one. In most of the episodes and movies it is all about Kirk, Spock and Bones. In Star Trek III, Uhura, for instance, is barely in it all. Here though, all of the crew has their own assignment and they each get at least one scene that is all about them.

There are several very funny scenes. Nimoy and Shatner share great comic timing in the truck as they try to explain their bizarre behavior to Gillian. And Spock's attempts at swearing are very funny. I also enjoy the scene with McCoy and Scotty at the plastic's factory where Scotty demonstrates transparent aluminum to the manager ("Hello computer!"). And of course, having the one Russian member of the crew, Chekov, being caught on board the USS Enterprise, the aircraft carrier, during the cold war, ends up generating some laughs. As does Dr. McCoy's visit to a 20th century hospital.

The other thing this movie does well is that it demonstrates how to deliver a message entertainingly. It's making a point here about saving the whales from extinction, but it doesn't beat you over the head with it. It just shows you a situation where if the whales were extinct, mankind would be destroyed. Okay, so it's not a very plausible situation, but they were able to raise awareness of the issue during the publicity tour for the movie and without making this movie any less entertaining.

Star Trek II, III and IV will always stand as the classic Star Trek movie trilogy. There would be a few more good Trek films, but none that would ever quite come up to the level of these. And of them all, this one just might be the most entertaining.

I was certainly entertained by The Voyage Home. It is a fast-paced, lighthearted adventure featuring the iconic seven member crew of the Starship Enterprise. As Scott wrote, the plot device of having them travel back to what was then modern day San Francisco allows for some humorous fish-out-of-water situations. And I appreciated how each of the seven stars has an important part to play in their mission to save the future Earth. Released during the 20th anniversary of the television series this was the highest grossing of all the original cast Star Trek movies.

One thing that struck me while I was watching Star Trek IV was just how young the cast looked to me now. Back in the 1980s I saw them all as very old but now that I am only 10 years younger than Nimoy and Shatner were in 1986, I have a much different perspective. I'm sure most Trekkies already know this fact but Shatner and Nimoy were born only a few days apart in March, 1931. Both men were 55 when they made this movie. Shatner had a youthful looking face while Nimoy was still in pretty good physical shape.

The funny bits are the best things about this installment. The scene with Uhura and Chekov asking for the whereabouts of “nuclear vessels” on the street corner, right in front of several police officers, comes to mind. Or Kirk saying to Gillian about Spock, “He's harmless. Back in the sixties, he was part of the free speech movement at Berkeley. I think he did a little too much LDS.”

The time travel element is also cleverly toyed with. Kirk hocking his antique eye-glasses for some much needed spending money all the while knowing full well that he will still receive them as a birthday gift from Bones in the future, is one example. Or the scene Scott mentioned where Scotty teaches the plastic's factory manager how to make transparent aluminum, “How do we know he didn't invent the thing?” And Bones' dramatic line delivery at the hospital is worth a chuckle or two. “My God, man! Drilling holes in his head isn't the answer! Now put away your butcher knives and let me save this patient before it's too late!”

Some ironic, unintentional humor happens when the now openly gay actor George Takei - as the pilot Sulu - excitedly says, upon their arrival in the famous gay mecca, “San Francisco. (pause) I was born there.”

As a fan of classic Hollywood I enjoyed seeing Jane Wyatt in her final feature film role. She reprises the role of Spock's human mother Amanda. Although this was the only Star Trek movie she appeared in she had originated the part back in 1967 in the television episode entitled “Journey to Babel”.

Star Trek IV: The Voyage Home successfully captures the feel of the original television series that I vividly remember watching as a small child. It has a sense of wonder, decent humor and a fascinating and diverse cast of characters lead by Kirk and Spock. I thoroughly enjoyed it. 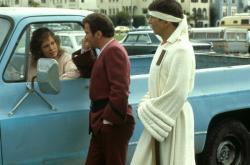 Agreeing with my brothers, the fish out of water angle provides the film's most entertaining moments.  The arrogant McCoy is easily the best, as he barks at doctors and scoffs at medical treatments from the 1980s. "Dialysis? What is this, the Dark Ages?"  The scene with Chekov being interrogated is a very dated joke.

The charm of the plot is summed up when Kirk and Spock meet Gillian.  Spock swims with the whales to communicate with them.  Speaking to an alien life form is a perfectly normal thing for Spock to do. The crew of the Enterprise has met and talked with countless alien beings.   However, doing it in a public place in front of so many people in 1986, looks completely odd.

Dr. Gillian immediately thinks he and Kirk are a little nuts. Spock addresses Kirk as Admiral and is wearing a robe. She also recognizes something in their sincerity. She offers them a ride in her pick-up truck.  Kirk says to her, "You're not exactly catching us at our best." and Spock adds, "That much is certain."

Kirk and crew do seem very lost, almost too much so.  Uhura and Chekov standing on a street corner acting like confused tourists seems a bit over-the-top for two such well traveled people.  On every other planet they have ever visited, this crew transported or landed with confidence and authority.  They detected where the life forms were and found them.  Here they sometimes seem as helpless as children.  "What do they mean by "exact change"?"

All of that provides many laughs.  Everything comes full circle when Gillian comes aboard the HMS Bounty. "Hello, Alice. Welcome to "Wonderland""  Kirk says to her.  Suddenly everything is back to normal as they all find themselves in their familiar roles as space traveling adventurers.

Although this is one of the best of the Star Trek films, it is not perfect.  The probe is never explained.  Where did it come from and why was it concerned about the whales?  What connection do ocean confined creatures have with such an alien entity?   I know, it was just a ploy to get the crew into the past, but I would have liked at least a moment or two worth of explanation.