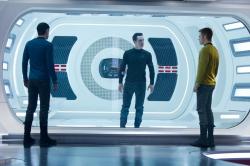 As a longtime Star Trek fan, it took me awhile to warm up to J.J. Abrams' reboot. My initial reaction to 2009's Star Trek was lukewarm at best. However, after a recent rewatch, with a consciously less skeptical eye, I found myself entertained by it. I may never have the same warm, nostalgic regard for this new version that I have for the original, but there's no denying its entertainment value. Star Trek Into Darkness, the follow up film, is even better than the first.

The darkness of the title could be applied to the shadow the details of the plot have been kept in since it was announced. This was mainly designed to keep the identity of the villain--played memorably by Benedict Cumberbatch of Sherlock fame--a secret. Since this is the internet age however, that secret has long been freely available, and knowing it, as I did, didn't reduce my enjoyment of the film at all, although I won't reveal the secret here. Suffice to say that he has a connection with the original films, and if you're a Trekkie at all, then you probably already know who he is.

Like Abrams' first Star Trek, this film is a fast paced action movie. Gene Roddenberry's Star Trek often tried to include modern social problems into his scripts, using Science Fiction as a metaphor, but there's not many layers to these new versions. Of course Abrams also has a bigger budget and infinitely better special effects at his disposal than Roddenberry ever had at his. From the opening scene to the big finish, the film rarely pauses to rest as it warps from one action scene to another. It also mixes in a healthy dose of humor, most often in the form of Scotty (Simon Pegg), which keeps the pace moving even faster.

The plot involves a terrorist, John Harrison (Cumberbatch), who blows up a Starfleet building in London, then murders a group of high-ranking Starfleet officials. When he flees to the Klingon homeworld of Kronos, the Enterprise goes in pursuit. After capturing him however, Kirk discovers that not all is as clear cut as it first seemed.

Although this is a minor spoiler, I'm going to reveal it anyway because it's my one complaint about this film. Leonard Nimoy returns in a cameo as the original Spock. In case you don't remember, he returned in 2009's Star Trek from the future along with that film's villain Nero, causing the past to be changed, supposedly explaining why the events in these rebooted films don't match the original films. I didn't like that explanation in that film and I don't like it here. I love Nimoy's Spock, but this series should stand on its own as a true reboot.

A much better way to pay tribute to the original series is the clever way the script works in references to the original films. The makers have fun switching up some scenes, reversing the Kirk and Spock positions, particularly in the big finale. Those unfamiliar with the original movies will just be able to enjoy those moments for their sheer entertainment value, while longtime fans will revel in comparing them.

The cast is terrific. In perhaps the biggest change from the original series, Uhura now plays a much larger role in the story. She replaces Bones as the third most used character next to Kirk and Spock. Scotty also gets a larger role this time out, providing, as I said, some comic relief. Cumberbatch makes a great villain with his sinister voice and mannerisms.

It may have taken me two films, but I'm finally on board with this Star Trek reboot. I hope they can keep this cast and creative team together long enough to make a few more. 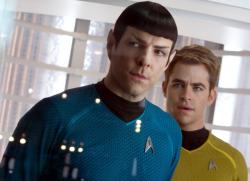 Zachary Quinto and Chris Pine in Star Trek Into Darkness

I love the 2009 Star Trek film and I love this one as well. J. J. Abrams nearly got both of them perfectly right. Both films are utterly entertaining, but I agree with Scott about the presence of Leonard Nimoy. He had his time, we did not need the dimensional time travel whatever from the first film and his reappearance here is over kill.

As Scott wrote, there are plenty of nuggets, references and in jokes for all the trekkies. I got many of them but have not seen all of the television incarnations, so I am sure I missed some. He also wrote that, "Those unfamiliar with the original movies will just be able to enjoy those moments for their sheer entertainment value..." Although there is some truth to that, it really helps to be familiar with as much of the source material as possible. My nineteen year old son, who has very little knowledge of the Star Trek universe, said he would give it three out of four stars. He did not enjoy it nearly as much as I did.

The best thing about the entire Star Trek franchise is, and has always been, the relationship between Kirk and Spock. Their opposing personalities make for the stuff of legend. Kirk is a man of passion. Whether bedding women or fighting for his crew, Kirk always gives it his all, no matter what rules he may have to break. Spock is all logic and reason. He obeys all rules and it takes an extreme circumstance for him to become emotional. Early in this film, Kirk decides to save Spock from a situation that Bones tells Kirk, Spock would not do the same if their positions were switched. Afterwards, Spock does not thank Kirk, he complains that by saving him he broke a prime directive.

Pine and Quinto play their roles much as Shatner and Nimoy played them. The same can be said of all the new cast, with the exception of Saldana as Uhura. Her Uhura is a much more valuable asset than Nichols's Uhura, who did little more than open hailing frequencies. This Uhura is a linguist who speaks Klingon. She is also written with a much more interesting personality. Her relationship with Spock is fascinating, if not completely understandable.

Although you could easily compare the terrorist activity in this film to events in real life, Into Darkness is not cerebral. It is an adventurous, entertaining science fiction romp, made all the better if you are well versed in Star Trek lore. I have complained in the past that Star Trek has long lost its sense of exploration. With this reboot, it is back and the Star Trek universe has never been more thrilling. 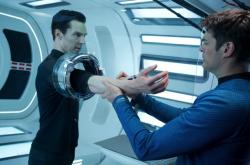 Benedict Cumberbatch and Karl Urban in Star Trek Into Darkness.

I too enjoyed 2009's Star Trek reboot and I liked this movie as well. They've done a good job of including many details from the numerous past incarnations of the Trek universe while at the same time managing to entertain those of us not overly familiar with it. Modern special effects have added another level of enjoyment to the franchise with significantly amped up action sequences.

The cast of actors continues to impress as younger versions of these iconic characters. Simon Pegg, Anton Yelchin, and John Cho all stand out as Scotty, Chekov, and Sulu, respectively. Each is given at least one great moment in which to shine. My favorite performance though, once again belongs to Karl Urban as Bones. He captures the essence of DeForest Kelley without doing an impersonation. He also gets some of the most humorous lines. My favorite one comes after Kirk's resurrection when Bones tells him how they used Khan to save Kirk's life. “We synthesized a serum from his... super blood. Tell me, are you feeling homicidal, power-mad, despotic?” Kirk gets the punch line, “No more than usual.”

I wasn't bothered by the inclusion of Spock Prime. This is an alternate reality set in the same time-line as the original television series and movies. Once you accept the possibility of time travel you have to accept that there are an infinite number of each of us existing simultaneously. I rather enjoyed seeing Leonard Nimoy (who, by the way, has now appeared in more Star Trek films than any other person: 8 (William Shatner has appeared in 7)). Besides he was able to pass along valuable information to his younger self while also providing helpful plot exposition for non-Trekkie audience members.

Last second rescues have always existed in the movies, no more so than in the Star Trek pictures. This time around, however, they over did it. It is my only real complaint about this movie (other than the fact that it runs a bit long). Within the final 45 minutes or so there are at least 4 examples of this...

SPOILER ALERT: When Admiral Marcus is about to fire on the Enterprise, Scotty dismantles the Admiral's ship's weapons at the last possible second. Just a few minutes later Kirk and Khan space jump to board the Admiral's ship. At the last possible second Scotty is able to open the hatch. Then of course Kirk is able to realign the Enterprise's radioactive power supply just in the nick of time to prevent the ship from burning up in the Earth's atmosphere. Finally, Uhura arrives on that hovering garbage cruiser with nanoseconds to spare before Khan crushes Spock's skull. Enough with the last second rescues already.

Despite these slightly overdone climaxes, Star Trek Into Darkness is an enjoyable thrill ride of a movie. I'm looking forward to the upcoming adventures of their five year voyage into deep space.