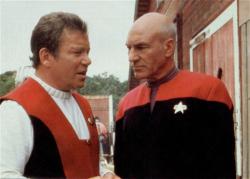 This was to be the Star Trek movie that bridged the gulf between the original Star Trek cast and the cast from Star Trek: The Next Generation. Captain Kirk would hand over the baton to Captain Picard and then the crew of the Enterprise-D would fly on in a series of new movie adventures. While that might sound like a good idea on paper, in reality, or at least in this reality, the results don't do justice to either Kirk or the Next Generation crew.

The movie opens with the maiden flight of the Enterprise-B. Kirk, Scotty and Chekov are onboard as part of the ceremonial launch. During the launch the ship receives a distress call from two ships caught in some kind of energy ribbon, they respond with a rescue attempt during which Kirk is "killed".

This opening scene was to have featured Kirk, Spock and McCoy, but Nimoy turned it down because the script was so bland and DeForest Kelley's declining health prevented him from appearing. With very little alteration of the script, James Doohan and Walter Koenig were brought in to replace them as Scotty and Chekov. Out of sheer laziness their lines remain the same despite the character change. This is most obvious when Chekov tells two crewmen that they're now nurses as he goes to set up a sick bay.

The film then jumps 78 years into the future to the holodeck of the Enterprise-D for an embarrassingly unfunny scene of the crew onboard a wooden ship for Lt. Worf's promotion ceremony. Data's, "I'm a wooden boy, but I wish I was a real one" shtick, which had grown old during the series, is trotted out one more time here.

When the plot does get going, it is revealed that a Dr. Soran, who was one of the people rescued by the Enterprise-B all those years ago, is trying to find a way back into that same energy ribbon, because apparently once you are in it, anything you desire becomes yours. It's like living in a Matrix of your own design. His plan wouldn't be such a problem except that to get back in it, he's destroying stars to alter the course of the ribbon so that it will pass through a planet that he intends to be standing upon.

Although there are moments of excitement and action, this plot ends up feeling like a souped-up two part episode of the television series with some higher quality special effects. It's definitely not a movie for anyone who is unfamiliar with the characters. No introductions are provided and no background given.

Eventually Picard ends up in the Ribbon along with Soran. He discovers that instead of dying, Captain Kirk has actually been inside the ribbon all this time. Picard convinces Kirk to leave the Ribbon with him and help him defeat Soran. Kirk does and he, SPOILER ALERT, dies for real in the process in a very unsatisfying manner.

Kirk's death should have been epic. He should have been saving the galaxy one more time and he most definitely should have died while onboard the USS Enterprise. Reportedly an early version of the script had Kirk commanding the battle bridge onboard the Enterprise-D and dying in combat against the Klingons, but the plot was scrapped. So instead he dies trying to stop a madman from destroying a star, which is noble enough, but not nearly legendary enough.

The most annoying thing about his death is that he dies because of a stupid plan that is the result of a poorly written script. When Kirk and Picard leave the Nexus Ribbon they are told they can leave it and exit into any time or place that they want. So Picard choose's five minutes before Soran's plan is completed. This means that the finale is a race against time. Well, why the fuck not just leave two hours before his plan is due to finish? Or a day, or hell, why not exit to the time when Soran was on the Enterprise and just hold him prisoner then?

Not only is Kirk's death a waste, it also takes time away from the Next Generation cast, whose movie this is supposed to be. Dr. Crusher and Worf are reduced to extras in their own film. Riker gets a few lines, but only Picard and Data get their own plotlines. Troi has a scene with Picard early in the movie but at the end is consigned to piloting the ship to give her something to do (a skill she was never shown to have before).

Being that this is Star Trek 7, an odd-numbered Trek film, I suppose it's no surprise that it's such a bad one. It just goes to show that they shouldn't have tried to mix the two casts, at least not in this half-assed way. Kirk's death deserves a movie of its own and certainly the Next Generation deserved a better introduction than this one. 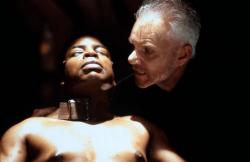 There are other plot holes besides the one Scott mentioned about the time Picard chooses to return to in order to defeat Soran (but then last second rescues have always been a staple of the franchise). How about the fact that despite Kirk being in the Nexus Ribbon for nearly 80 years prior to Picard's arrival there, it is Picard who must explain to Kirk where he is. They try to rationalize it by saying that since time is irrelevant in the Nexus that to Kirk it is as if he just arrived there. But it really makes no sense. And this scene, which was shot at William Shatner's real house and features his real horse, drags on for far too long.

I've never been a huge fan of Star Trek (although I have grown to appreciate it and I have nostalgic memories of watching the original series with our dad) but there are two things I've always associated with it: futuristic technology and rabid fans. Star Trek Generations offers examples of both. This was the very first motion picture to have a web site created solely for the purpose of promoting it. Remember this was way back in 1994 when the internet was still crawling around on its hands and knees. As for the rabid fan base, how's this for a kicker. Malcolm McDowell actually received death threats over the fact that his character, Soran, killed Captain James T. Kirk.

I did enjoy Data as he tries to adjust to experiencing human emotions for the first time. It probably helped that I never watched The Next Generation television series so I wasn't tired of the character and his yearning to be human. Brent Spiner is terrific in the role and he steals several scenes. I laughed during the scene with LeVar Burton where Data finally “gets” a joke that was told seven years earlier.

Again agreeing with my brother, it's the script that is really to blame. It was not only lazily written, but sloppily so as well. Take the ending for example. Picard, in a serious tone, says, “We must cherish every moment, because they'll never come again.” He must have a very bad short term memory (or the writers do) because that is exactly how he just defeated Soran; by reliving past moments.

There are individual moments that work, and the cast is certainly game, but overall Star Trek VII: Generations adds credence to the odd numbered Star Trek curse theory. 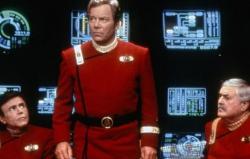 I enjoyed the beginning as Kirk, Chekov and Scotty visited the new Enterprise as dignitaries. Kirk aches to get into the captain’s chair. Scott mentioned Chekov reciting a line meant for McCoy while I liked when Scotty asked Kirk if there was something wrong with his chair as Kirk is sitting on its edge. Spoken by Spock it would have been a literal question but asked by Scotty, it comes with a knowing wink.

Then the movie moves 78 years into the future and I became almost immediately bored. The cast of Next Generation is a group of wonderfully nice, happy people but they lack the friction of the original group. Where is McCoy’s grumpiness or Scotty’s orneriness? Next Generation has had some romantic onboard tension but these characters have always seemed a bit dull to me. Seriously, a Muppet could have played Riker with as much charm as Jonathan Frakes. The only time The Next Generation cast came to life was when someone more interesting like, Troi’s mother or Q, paid them a visit.

I was so bored the first time I saw this film that I fell asleep during it. The good news being that I had no idea what was to come next as I struggled to get through it a second time. As these characters held little interest for me, I had no emotional investment in their safety or their future. Piccard crying over a nephew he has barely mentioned was a bit over wrought. Clearly that scene is setting us up for when Piccard is in the Nexus.

Patrick liked the jokes at Data’s expense. He has always been the intended comic relief of The Next Generation but I have always found him pointless. He is a machine, plain and simple. I know, I know, there was an entire episode based on the debate of his autonomy but who really cares?

My favorite character has always been Worf. Here is a minority living among the enemy from a previous generation. His culture is vastly different from earthlings. There is much to explore with him being a Klingon. One of my favorite pieces of humor in this movie is when Soran slaps the female Klingon Captain and she coos back, as much as a Klingon can coo, “For your sake I hope you were initiating a mating ritual.” As Scott noted, Worf unfortunately barely makes an appearance here.

One of my favorite scenes is when the Enterprise crashes onto the planet. Although destroying the ship has lost its emotional impact since it was already demolished in Star Trek III: The Search for Spock (1984), it was still fascinating seeing the scale of it barrel through the trees and vegetation on the planet before coming to a stop.

As Scott complained, Star Trek VII: Generations should have, and could have, been a monumental film.  It is the bridge between the two series! It features the death of Kirk! Two huge key elements are in place but the writers took the worst possible routes. They should have let Kirk go back to the beginning where he takes care of Soran 78 years prior. At least then he could have died with some familiar faces around him instead of this dreary facsimile called Picard.