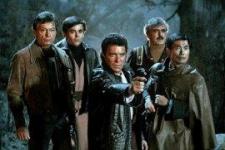 The chemistry between the crewmembers is what made the old Trek so enjoyable.

There's long been a theory that the odd numbered Star Trek movies are inferior to the even numbered ones and for some weird reason this does seem to be true. Certainly with the movies that feature the original cast, numbers 2, 4 and 6 are better than 1,3 and 5. However, while 1 and 5 are really quite bad, Star Trek III: The Search for Spock is actually pretty good. It just had the misfortune of being sandwiched between the two best of all the Star Trek films; The Wrath of Kahn and The Voyage Home, and so can't help but suffer by comparison.

Leonard Nimoy has famously had a love/hate relationship with the character of Spock. He only returned to the part for Wrath of Kahn under the agreement that he would be killed off in it. However, following the success of that film and the much more positive experience of making that movie compared to the debacle that was the first Star Trek movie, Nimoy decided that maybe he'd made a mistake and should reconsider the death of Spock. Luckily for Harve Bennett, the writer and producer of this movie, there had been several hints in Wrath of Kahn that allowed for Spock's resurrection without it seeming too contrived.

The plot then follows Kirk and the rest of the Enterprise crew as they set out to return to the Genesis Planet to retrieve Spock's body and to take it to Vulcan where it can be reunited with Spock's mind (or Katra as the Vulcans say) which Spock had placed in the mind of Dr. McCoy before he died. To make things complicated the Klingons have gotten wind of the Genesis Device and want it for themselves to use as a weapon and it becomes a race to see who will get to the planet first.

One thing that I like about this movie is that it features darker moments than you usually see in a Star Trek film. The two most shocking events are the destruction of the USS Enterprise and the death of Kirk's son David. Shatner does some of his best acting in this movie, particularly during the latter scene when he reacts to the news that David is dead. The usual repartee and wit though is not completely gone. Dr. McCoy gets a few funny moments as he tries to cope with his Vulcan side coming out. And Scotty having to deal with his new duties aboard the USS Excelsior are also worth a few chuckles.

Star Trek's greatest strength has always been the relationships between the main characters, especially between Kirk, Bones and Spock. You really believe that Kirk would go through the hell he goes through to save Spock and this gives the movie its emotional resonance. As good as Star Trek: the Next Generation and the other spinoffs were, they never managed to quite recapture the chemistry that those three characters had. And somehow I can't imagine the new Trek film that comes out later this year, will do it either.

Leonard Nimoy became the first of several Star Trek cast members over the years to direct one of the movies or television episodes in the prolific sci/fi franchise. This marked Nimoy's debut as a motion picture director. The result is one of the darkest and best entries in the original-cast movie series. And, as Scott said, it's the second movie in the great Star Trek trilogy, linking Wrath of Kahn to Voyage Home. It may not equal the level of the other two but it comes damn close.

Even a casual fan like myself will be struck by the two scenes my brother mentioned. I was shocked to see the Enterprise actually blow-up. I didn't think they would actually do it. I kept waiting for one of those famous Star Trek last-second-rescues. The other is when Kirk's son is murdered. Kirk staggers back to his chair and curses, “Klingon bastard! You killed my son!” For once Shatner doesn't overact.

While all of the regulars get a chance to shine, my two favorites this time around are Bones and Sulu. It's funny hearing the logical Spock's thoughts and phrases coming from the grumpy Doctor. His discomfort at sharing his head with the Vulcan provides a few laughs. George Takei has a memorable scene with a large security guard. “Don't call me Tiny.” He tells the man after flipping him to the ground.

My favorite guest star is Dame Judith Anderson. She was 87 at the time and hadn't made a movie in more than a decade. This would be her final big screen appearance. She was a true cinema legend having played Mrs. Danvers in Hitchcock's Rebecca and Big Momma in Tennessee Williams' Cat on a Hot Tin Roof. Among her many roles was the Hebrew slave Memnet in the 1956 Ten Commandments. Apropos of the fact that the scenes on the planet Genesis were shot on the same sound stages used by DeMille for his most famous biblical epic. She brings some gravitas and high drama to her role as the Vulcan High Priestess.

As has been noted in the above review, as well as several other places on this site, the key to Star Trek's appeal is the interaction between the core ensemble. A great example is when Kirk, Uhura, Sulu, and Scotty get their first look at the new spaceship...

Uhura: Would you look at that.

Kirk: My friends, the great experiment: The Excelsior. Ready for trial runs.

Scotty: Aye. And if my grandmother had wheels, she'd be a wagon.

There have been a dozen Star Trek movies made in the past 35 years. Star Trek III: The Search for Spock certainly ranks in the top half of the list.

Merritt Butrick and Robin Curtis in The Search for Spock

The Wrath of Kahn, The Search for Spock and The Voyage Home are the best the original cast films have to offer. Their stories are all exciting and linked to each other, like a movie series should be. These three movies prove that these past middle aged actors could have continued in their roles for years to come.

As Scott wrote, the situation of a Genesis planet brought an easy and viable excuse to bring back Spock. I am not sure if that was foresight or dumb luck. It was a brilliant piece of writing by Harve Bennett, who wrote Star Trek II-V. However, I think he made a huge misstep in this script.

Although the original cast members were the heart and soul of the series, it desperately needed some younger blood to mingle with the veterans. Lt Saavik and David were ideal additions and the potential they had for a relationship was a bit exciting to imagine. David and Saavik should have both become members of Kirk's permanent crew. It makes little sense that these old Admirals and Officers are still doing the work of much lower ranked Star Fleet members. On a personal level, David and Saavik should have married and had a child. This could have provided all kinds of opportunity for humor as Saavik is Vulcan and David is Kirk’s son, their child would make Kirk and, for intended purposes, Spock grandparents. Imagine the debates that could have caused them on how to raise a child.

Sadly, as Patrick mentioned, David is killed off and Saavik only has a brief appearance in The Voyage Home. David’s death does in fact provide Shatner with an emotional moment but it was not needed. Coming so shortly after the “death” of Spock, another personal tragedy in Kirk’s life seems unnecessary, script wise. Even though Kirk acts as if it does, David's death carries little weight as he never existed before Wrath of Kahn. David's death also destroyed the potential to incorporate him into the series and keep the Enterprise from looking like an intergalactic retirement home.

Other than that, The Search for Spock is no lesser a film than the movies that book end it. The plot is simple, direct and moves right along. At only an hour and 45 minutes, it never drags on. It provides some light moments that Trekkies relish, like spotting Tribbles at the bar when McCoy tries to charter a ship and, of course, the moments my brothers mentioned of McCoy acting and reacting like Spock. I laughed out loud when Kirk explains to McCoy, “You're suffering from a Vulcan mind-meld, doctor.” And a perturbed McCoy responds, “That green-blooded son of a bitch! It's his revenge for all the arguments he lost.”

Next to the original three Star Wars films, Star Trek II – IV is the best science fiction trilogy thus far put on the big screen. As a last note, Merritt Butrick, who played David, died at the young age of 29 from AIDS related illness. A mere five years after this film's release.