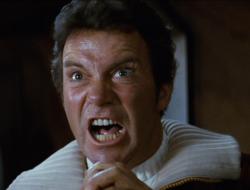 William Shatner in Star Trek II: The Wrath of Khan.

The Wrath of Khan, the best of all the Star Trek films, tells the story of Khan, a character from the original Star Trek television series, and his quest for revenge against Admiral James T. Kirk. Whom he holds responsible for his imprisonment and for the death of his wife. His quest sends him on a cat and mouse game against Kirk and involves not only revenge but also a battle for the secrets of Genesis, '…a device which can turn lifeless planets into living, breathing ones, capable of sustaining any life form put upon it'.

There are several factors that make Wrath of Khan the best of the Star Trek films. One of them is that this is really the only Star Trek film to feature the original cast that requires no previous knowledge of Star Trek. It is complete unto itself. The following movies all depend upon you having seen the previous ones, to understand what is going on with the characters and the plot.

Another factor, and one that has always made the best of Trek so great, is the character interaction. The writers and the director, Nicholas Meyer, realized that it is the humor and camaraderie between the crew of the Starship Enterprise that created the legions of Star Trek fans, and they play this angle to the hilt. McCoy and Spock are at it again with their emotion versus logic arguments, and the loyalty and friendship of Kirk and Spock is at it's strongest here.

What movie would be complete without an incredible villain? In Khan, Ricardo Montalban created a villain of legendary proportions. He goes over the top and beyond, spouting out epigrams and strutting around with his shirt open to the navel. He is the perfect foil to Kirk and the only actor ever to appear in anything connected to Star Trek that can compare to William Shatner in hamming it up.

Finally, on top of everything else this movie has to offer, it features the 'death' of Spock. Even though by the time I had seen this movie, I knew that the Search for Spock had been a success, I still grew misty-eyed as Kirk and Spock said their farewells to each other in the engine room of the Enterprise. 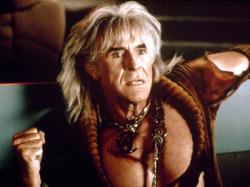 Ricardo Montalban in Star Trek II: The Wrath of Khan.

As Scott has pointed out, you need not have seen the series to enjoy this film. In fact if you have, you may note a certain flaw. In The Wrath of Kahn, Chekov recognizes Kahn, however Chekov was not even in the series during the episode in which Kahn appeared.

That aside. The movie is great. Star Trek II through IV are the best in the movie series. They are actually connected in their plots leading into each other. Yet each stand on their own as entertaining films. Ricardo Montalban is great as the angry literary quoting egomaniac, Kahn. Kirk and Spock share the most emotional scene ever put into a Sci-Fi film. The additional characters of Savik and Kirk's son were good moves. They should have been kept around throughout the following movies.

This Sci-Fi film really does not rely on special effects. Star Trek II through IV are character driven movies. The camaraderie and conversations throughout these three films are what makes them soar. The original cast could still be doing these movies today. Add a few young characters for the action scenes and have the veterans around for the heart and humor that made the Star Trek universe such a success. 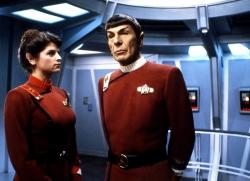 Kirstie Alley and Leonard Nimoy in Star Trek II: The Wrath of Khan.

Unlike my brothers I have never been much of a Sci-Fi fan. Sure, I watched the original Star Trek series as a kid but except for that casual interaction, the entire phenomenon that the franchise has become has never been more than a blip on the radar screen of popular culture to me. In fact, until I set out to review this movie I had never sat through an entire Star Trek production.

I agree with my brothers that the character interaction is completely engrossing, the special effects are fairly minimal (at least for the genre) and because of this hold up well nearly twenty years later; also that the plot and pacing are very nearly perfect. This is one film that, if anything, is too short.

Scott mentioned the ongoing debate between Bones and Spock. The villain Kahn personifies this in the fact that he is supremely intelligent and yet is completely consumed by his hate and rage. Therein lies the secret of Star Trek's appeal. Aren't we all, on some level, caught in this struggle everyday of our lives? Putting it in a futuristic, outer space setting distances us enough to observe objectively. Spock, because of his pure logic point of view is the perfect enigma. As humans we can only imagine what his existence is like and though most of us would not choose to be like him, still we are intrigued.

So, though Star Trek does not offer the scope or high adventure of Star Wars, it instead gives us a reflection of ourselves and just possibly who we may become.