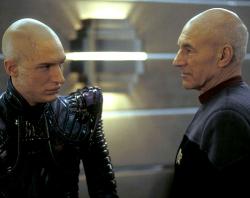 When Star Trek: The Motion Picture came out way back in 1979, it was actually a horrible movie.  The problem was that Gene Roddenberry was still in charge of the series at that time and while he knew how to write for television, he didn't have a clue how to write a movie.  Paramount then took control away from him and gave power to people who did know how to make movies and the result was three of the best Star Trek movies right in row.

The same thing needs to be done now.  Rick Berman, who has personally produced all of the incarnations of Trek since Roddenberry's death, makes wonderful TV shows, but only so-so movies.  As is the case with Star Trek: Nemesis.

Star Trek: Nemesis would have made a great two part episode in the television series, but it just doesn't have the grandeur or scope to be a great movie.  The writers and directors try to give it scope and grandeur, but at times it feels forced.

The movie begins with a coup detat in the Romulan Empire and the newly risen leader wants to speak with a Federation Envoy purportedly to discuss a lasting peace.  The Enterprise, which is currently on its to way Betazed, carrying the newly-wedded Will Riker and Deanna Troi, is dispatched to Romulus to represent the Federation.

It turns out that the new Praetor of the Romulan Empire is in fact a clone of Captain Picard.  It seems that at one time the Romulans hatched a plot to replace Picard with a duplicate and thus plant a mole in Starfleet.  When this plot was abandoned they sent the unwanted clone into the mines on Remus, where he came of age and eventually led his fellow miners in revolt and finally took control of the entire empire.

The meeting between Picard and his clone leads to some thought provoking moments about genetics and whether or not Picard, given the same upbringing, would have behaved in the same way as the clone.  Is our destiny a forgone conclusion based on our genes?

Tom Hardy as the clone of Picard is excellent and is quite believable as a younger version of Patrick Stewart.  Their scenes together make up some of the best moments in the movie as they go back and forth chewing up the scenery together.

It turns out however that the clone is dying and that only a transfusion of DNA from Picard will save him.  Unfortunately, the transfusion will also kill Picard.

Now if this had been an episode of the show, this would have been enough of a plot.  Since this is a movie, the producers decided that Earth has to be threatened, so suddenly the clone not only wants Picard, but he also wants to destroy Earth as well.

The Enterprise then races towards Earth with the Romulans in hot pursuit, both ships heading towards the climax of the movie.

There is also a subplot involving a duplicate android of Data which mirrors the Picard/Clone storyline.  Both character's duplicates and their identity crisis comes together at the end but are resolved in very different ways.

This is not a movie that was made with non-fans of the series in mind.  Someone watching this movie who never watched the Next Generation series will miss a great deal.  This is a nice touch for the fans, but will limit its appeal.

As a fan myself however, I did enjoy seeing these great characters in action again.  And it is an improvement on the last Trek movie, but isn't as good as First Contact, which still stands as the best Next Generation movie so far.

With such a history behind it, and such a great cast, headed by Patrick Stewart, there is still room for another great Star Trek movie.  What is needed is an outsider, an experienced film maker, hopefully a fan of the show, to come in and write and direct an original and great movie.  As for this entry, if you're a fan you'll be satisfied, if not ecstatic, but its doubtful that this movie will win any new converts. 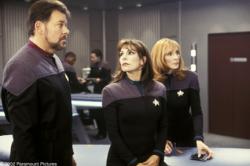 I agree with Scott, that this did have the feel of a long episode. Albeit, a very good episode. The pace and action are not Terminator plenty, but for Star Trek standards it was enough. The philosophy, so prevalent in every Star Trek incarnation that I have seen, is present. However, I think the one thing that makes this movie work is that in centered on its two best characters, Picard and Data.

Other than Picard, Data and Worf, the rest of the crew are utter bores. Riker is played by the completely charmless Jonathan Frakes. Troi is always so damn serious. She was anything but sexy when she was inviting Riker to bed on their honeymoon. She always uses the same damn tone to say everything. Beverly and La Forge luckily get even less screen time so we don't have to be put to sleep by them.

The heart of Next Generation has always been the relationship between Picard and Data, just as the original was between Kirk and Spock. In one episode Picard defended Data's autonomy at a trial. He was always answering Data's questions and encouraging him. Data, in return was the comic relief who always ended up saying something relevant or thought provoking with out even realizing the relevance of what he said.

Nemesis pushes every other crewmember to the background as Picard and Data deal with similar issues and end up being each other's rescuers. Their friendship is the best aspect of this series. The problem with it is that it will never be as great as that of the Kirk/Spock friendship. The climax of this movie is very similar to another Star Trek movie in which Kirk and Spock wring some major emotion out of this franchise. Nemesis blows the chance to really give this movie a similar emotional charge.

I concur with Scott that this is a good movie, but it could have been so much more. 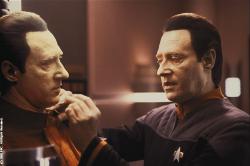 Brent Spiner as B-4 and Data in Star Trek X: Nemesis.

I was a casual fan of the original series but paid scant attention to Star Trek: The Next Generation. In fact I've never seen an entire episode and, until today, had never watched a Next Generation movie. I therefore have no idea if this one is any better or any worse than any other entry in The Next Generation franchise. I do know it's the lowest grossing of the eleven Star Trek movies released (as of this writing) along with carrying the dubious honor of being the only one not to open at the top box office spot.

I was disappointed in the action sequences. The scene on the desert planet where they discover C-3PO and get chased by Sand People – oops I mean where they discover Data's prototype and get chased by some indigenous humanoid types (I'm sure some Trekkies could name the species) in dune buggies, was ridiculous. These aliens couldn't hit the side of a barn. In fact I've seen Storm Troopers with better marksmanship.

Fortunately this movie is more about interpersonal relationships than action scenes. I agree with my brothers that it is Captain Picard and Data that supply the emotional weight of the story. Although to be honest, I was more intrigued by Data and B-4 (get it?) than I was by Picard and his whiny little clone.

SPOILER ALERT: The high point of the movie is when Data saves Picard and teleports him back to the Enterprise while sacrificing himself. As Eric wrote – and as every Trekkie surely knows – they are the Spock and Kirk of The Next Generation and together they make nearly as memorable a team. And to be fair Patrick Stewart and Brent Spiner are actually superior actors to William Shatner and Leonard Nimoy. Still it's hard to beat the original and as such Data and Picard will always be a pale imitation.

I'm sure I missed many of the more subtle interpersonal dynamics of the crew. Still I can honestly say I was never bored by Star Trek X: Nemesis. However it didn't make me want to rush out and watch any other Next Generation movies either. Apparently nearly an hour of shot footage was left on the cutting room floor. I have no idea if this would have improved the movie or ruined it but I'm sure there are Trekkies that would kill to get their hands on it.