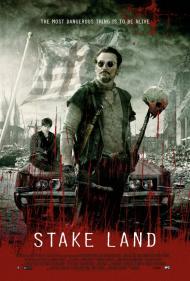 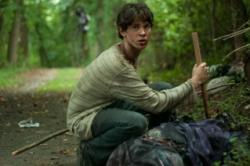 If The Road was too slow paced for you and Zombieland not serious enough, than Stake Land might be the movie for you. It's a low budget post-apocalyptic road picture that packs a lot of action and scares into a low key package. I've always been a sucker for a good end of the world story and Stake Land is a good one.

The story is set at some unknown time in the near future. An unexplained epidemic of vampirism has swept across the earth and mankind is reduced to pockets of survivors. Martin is a teenage boy whose parents were killed by a vampire, but was rescued himself by the enigmatic vampire hunter known simply as Mister. The two of them travel north across America, heading to New Eden, a supposedly vampire free place in Canada.

Along their journey they must deal with not only the blood-sucking undead, but also a religious cult known as the Brotherhood that has grown up around the idea that the plague is part of god's plan for humanity. Mister draws the ire of the Brotherhood when he kills two of their members after they've raped a nun played by Kelly McGillis. Compared to the twisted values of the Brotherhood, the vampires seem better. At least all they're after is a good meal.

The action is quite good. There are several good battles between Mister, Martin and the vampires. Mister is a rough and tumble vampire hunter of the old school variety. There's nothing sexy or glamorous about him. In another world he might be a bartender in a dive bar or a member of a motorcycle gang. He's definitely the person you want on your side in a fight though. At several points young Martin is told or asked if he wouldn't rather stay in one of the remaining towns they stumble across, but he wisely knows that he's far safer in Mister's company than in any town, no matter how well defended.

Equally unglamorous are the vampires themselves. They aren't the fancy pants pussy version that cause tween girls to get moist. They're mindless, ravening monsters who just want to tear your flesh apart and suck out your blood. A particularly disturbing moment involving a vampire and a baby, takes place at the beginning of the film and sets the tone for what it is to come later.

The mood and setting is quite grey and somber and it fits the story quite nicely. There's nothing snarky or self-referential about it. It takes the situation quite seriously and so will the audience.

If I had to point out any weakness, it's probably in the dialogue, which at times sounds a bit awkward and forced. Several time the characters spout lines that might sound good in a sound bite in a movie trailer, but isn't at all the way real people speak. This is a minor quibble though as the dialogue is kept to a minimum anyway.

The filmmakers deserve a lot of praise for making such a good film with such a low budget and a relatively unknown (but talented) cast and making it feel quite big and very entertaining. If, like me, you enjoy a good end of the world story, then don't miss this one. 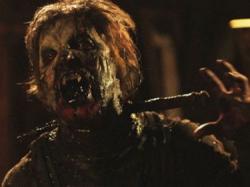 These aren't your Twilight blood suckers.

I thoroughly enjoyed this low-budget horror film. The set-up has been done to death (or more aptly un-death) but it is done so well here that it doesn’t matter how many end-of-the-world vampire/zombie plague movies you’ve seen, Stake Land will pierce your imagination.

Mister is a great character but this is really Martin’s coming-of-age story. He is on the verge of becoming an adult in a ravaged civilization. Mister is tough as hell and never shows emotion but he obviously has made it his mission to protect Martin while teaching him how to be a man and survive in a world gone mad. They make a memorable movie team as they travel this violent landscape fighting the ravenous vamps and obscenely crazy cult while making the occasional human friend.

It was important that the character played by Kelly McGillis be a nun. Otherwise the filmmakers could have been accused of having an anti-Christian viewpoint since the Brotherhood is an offshoot (a sick fucked-up one) of Christianity and they are referred to as Crazy Christians at one point. The nun character represents Christianity in its pure form.

The story builds to a scary climax before the satisfying conclusion. I hate when these type of movies have ambiguous endings. I want to know whether the vampires/zombies win or mankind finds some hope. Stake Land, while not answering every question, has a solid finish.

Without the use of a big budget Stake Land makes you believe in the world it creates. It demonstrates that old fashioned make-up can be just as effective as, and maybe gorier than, all the CGI in the cyber world. Stake Land has genuine tension, cool good-guys to root for and jump out of your seat scares. Sounds like a winner to me.

Mister doing what he does best, killing vamps.

As you wrote Patrick, the ending does not answer all the questions but it does complete Martin's journey to manhood and no, that does not mean he has sex.  In fact, the film takes a very basic approach to Martin's growth.  Mister teaches him to survive on his own.  The setting is an apocalyptic vampire world, but it is actually a very well made coming of age story.

You see Martin grow up in subtle ways.  Mister teaches him to fight the vampires, and scolds him when he does not do it correctly.  He discovers sex by finding a deck of adult playing cards.  At one point in the middle of the film Martin finds a girl vampire and runs to tell Mister.  Near the end he races into a building to save someone, knowing there is a vampire inside.  He goes from being a child needing daddy's protection to being able to protect himself.  The key moment being when he ignores Mister's warning and runs into the building anyway.

Besides the crazy Christians, the entire film is filled with Christian references and imagery. The nun collapses in front of a scarecrow that looks like Jesus on the cross.  Mister gets stakes put threw his hands as Jesus is often depicted.  Little statues of Jesus and Mary play a small part.  The place they are looking for is called New Eden of all things.

Stake Land is a very well made film on an obviously limited budget.  It never made a dent at the box office, which is a huge crime as I would love to see a sequel.   The actor who plays Mister, Nick Damici, wrote the script with the director, Jim Mickle.  I look forward to their next project, whatever it may be.