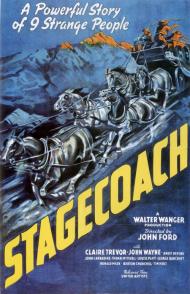 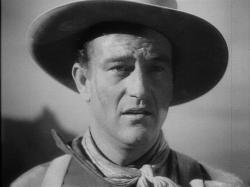 A star is born!

Eighteen minutes into Stagecoach director John Ford zooms in for a close-up on John Wayne as the Ringo Kid. In that instant Wayne became a star and the most successful director/actor team in the Western movie genre was born. Wayne had been toiling for a decade in Hollywood making B-movies. At 31 he was already a veteran of more than 50 features when Ford cast him in this one and changed movie history forever.

Stagecoach has often been credited with creating many of the clichés that would become old hat in Westerns. Whether or not this movie created these images I don’t know but it certainly made them famous and brought prestige and an unprecedented popularity to the cowboy picture in that most remarkable of classic Hollywood years, 1939.

Here are some of the iconic images that Stagecoach used that would become Western clichés. Monument Valley itself (this was John Ford’s first movie shot here). These dramatic cliffs standing in the middle of barren plains would be forevermore associated with the genre. At the beginning of Stagecoach we learn that Geronimo is on the warpath with his Apache warriors. In one scene we see them sending smoke signals.

Then there are the action scenes. They’ve been done a million times since. The first is an Indian attack on the titular stagecoach which begins with an arrow whizzing suddenly in through the window and hitting one of the characters. Just when it seems that all is lost we hear a bugle call and (that’s right) the cavalry rides to the rescue. The other action scene involves a shootout between the Ringo Kid and the man that killed his brother. It takes place on the dusty and deserted streets of a stereotypical Western town.

The people riding the stagecoach are all familiar types. Wayne is the quintessential good guy with the white hat, then there is the saloon gal with a heart of gold, the kindly but drunken doctor, the ex-confederate gambler, the crooked banker, the timid Easterner, the honest sheriff, the comic relief driver, and the good girl is a pregnant cavalry officer’s wife.

The pacing is rather deliberate. It is in essence a character study where these 9 disparate people get to know each other and learn a thing or two about themselves as well while on a dangerous journey together. The black & white cinematography is exquisite and the cast superlative. Stagecoach garnered seven Academy Award nominations including Picture and Director. It won two. Thomas Mitchell took home the Oscar for Best Supporting Actor for playing Doc Boone and it was awarded the prize for Best Score as well.

Stagecoach is one of those movies that everyone has heard of but very few people, it seems, have actually watched. If you are among this group do yourself a favor and check it out soon. 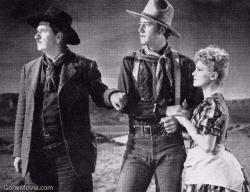 The cast of characters make Stagecoach work.  From Ringo the outlaw to Dallas the saloon girl, Stagecoach is filled with classic western personas.  Made in 1939 we are forced to see through the censors to what some of these people really are.  Dallas is clearly a prostitute.  She smiles surprisingly when Wayne calls her a "lady" in front of the other passengers.  Doc Boone is a drunk but he also has a scene where he sticks his hand out the window toward the old bats who drove him out of town.  They all looked suddenly shocked.  It does not show it, but clearly he flipped them off.

When Dallas and Doc are being forced out of town by the morality of some old women, Doc Boone says to Dallas, "We're the victims of a foul disease called social prejudice, my child. These dear ladies of the Law and Order League are scouring out the dregs of the town."

The effeminate Peacock shows up right afterwards.  Doc Boone calls him a "Preacher."  Peacock starts to correct him, "I am not a clergyman I am a..."  A bit later on the stagecoach, Peacock tries to get off when he realizes how dangerous the journey may be.  Doc Boone says to him, "By all the powers that be reverend, your a man."  Peacock then turns his eyes up in a most queer fashion.   Later he wears a scarf as a woman would wear one, not a handkerchief like John Wayne has on.  He claims to have five children but I think otherwise.

Andy Devine had one of the greatest comedic voices of all time.  Lines like, "If there's anything I don't like, it's driving a stagecoach through Apache country." are not funny onto themselves, but put those words in Devine's mouth and they are hysterical.  One of his best lines comes right after a passenger gives birth and he asks, "Hey, Curly, do you think I oughta charge Mrs. Mallory's baby half fare?"

This is of course John Wayne's star making role.  He brought a sense of masculinity to the silver screen that had never been seen before.  Rudolph Valentino was a swarthy ladies man.  James Cagney was an inner city roughneck,  Clark Gable was a drinking, gambling womanizer.  John Wayne was a man's man without having to prove it through sex, drinking or fighting, although he often did the latter.  John Wayne portrayed men with honor and little prejudice.  He does not look down at Dallas for being a lose woman or think to use her for sex.  After proposing to her, Dallas says, "But you don't know me - you don't know who I am."  Wayne responds, "I know all I wanna know."  My favorite line of his is, "Well, there are some things a man just can't run away from."

The funniest scene happens when a man complains that his Indian wife stole his horse and rode off.  He brags that he beat her and she still kept working,  "Your wife?" someone asks, but he corrects him, "No, my horse."  With jokes like that, great characters, just enough action and a great ending, Stagecoach is a classic among classics. 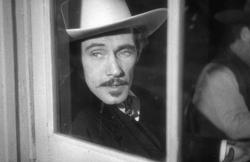 John Carradine as Hatfield, the gambler with a shady past in Stagecoach.

Patrick, I had a similar thought to your last paragraph when today I sat down to watch this film for the first time. I thought, this must be the most famous movie that I'd never seen and yet I couldn't remember a time when I wasn't aware of it.

A casual watch of this creaky old horse opera and it does seem as though it's just a string of old Western cliches. Although they may have been new in 1939, or at least never presented in quite this way before, they have been done hundreds of times since. You have to give Ford credit for inventing them or at least elevating them, but because we've seen them so many times since, it's impossible to watch this movie with the same eyes as the original audiences who propelled it to 7 Academy Award nominations and almost universal acclaim. It doesn't mean we can't enjoy it. Just that we can't enjoy it in quite the same way.

The big reason this movie does hold up so well despite the cliches is the characters. Both the way they are written and the way they are portrayed are wonderfully done. Patrick, you say that they are all familiar types and you're right up to a point. What makes them so unique is that nearly all of them are fully developed and three-dimensional with morals that are shades of grey rather than black and white. Wayne's Ringo Kid, while clearly the good guy, has also escaped from prison. Dallas is a prostitute with a heart of gold. The doctor is a drunk, but he's a decent guy. Peacock is effeminate and scared, wanting to turn back, but by the end he shows bravery. Hatfield is a gentleman, but with a murky past. Only Andy Devine's Buck and Gatewood the banker are two-dimensional, with Buck used for comedy relief and Gatewood as the villain. The action is well directed, but it's the characters with their human flaws and frailties that make you want to see this journey through to the end.

One of the Oscar nominations was for Black and White Cinematography and good use is made of Monument Valley, but if ever a movie was crying out for the Technicolor treatment, it's this movie. The desert shots are great, but they could have been even greater in color. Would color have made it a better movie? No, because the characters, which are at the heart of the story would still be the same, but it would have looked better and it seems like such a waste to go on location to such an amazing spot and then only film in black and white. Although I'm sure Patrick will disagree with me.

You can see that Wayne was star material, but I was more intrigued by John Carridine's Hatfield. I wanted to know his full backstory instead of the just hints we are given. Thomas Mitchell is also great as Doc Boone and I'm glad to see that he won the Oscar for this role.

Like you Eric, I also enjoyed the humor. It keeps the story from becoming too serious or maudlin. The pace, which is already peppy, is made even lighter by the frequent use of levity.

This is a classic without a doubt and one that lived up completely to my expectations.