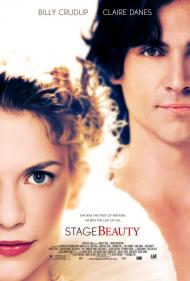 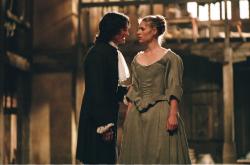 Set in 17th century London, Stage Beauty tells the story of Ned Kynaston (Crudup), the most celebrated leading 'lady' in England. His arrogant talent invokes admiration from many, but jealousy and bitterness in others. When King Charles II grows tired of seeing the same old performances and to please his mistress, he repeals the law that prohibits real women from acting on a public stage. Overnight Kynaston is a has-been, but his former dresser, Maria (Danes) -- now an actress -- suddenly finds herself the toast of the town.

The story is told with both drama and humor. Crudup delivers a brilliant performance as the bi-sexual diva as does Danes as the aspiring actress who ends up finding fame based more on novelty than her feeble talents. As one character in the film puts it, “She's the first of her kind, you were the last of yours." The supporting cast is equally strong and provides most of the humor, with Zoë Tapper as the Nell, the King's lower class mistress, stealing every scene she appears in with her boisterous personality.

Inevitably, due to the time period, location, use of Shakespeare's work, and with a central female character longing to appear on stage in a time when it was forbidden, this movie has been compared to Shakespeare in Love. While it is true that they bear some resemblance to each other, particularly in the way that they both look back at a historical period with modern sensibilities, the resemblances are only skin deep. Shakespeare in Love is highly romanticized and sanitized, whereas Stage Beauty is bawdier and wittier.

Based on the limited information available on the real Ned Kynaston, Stage Beauty is an interesting and quite often funny look at a pivotal moment in the history of the theater. And although the costumes and accents might remind people of an episode of Masterpiece Theater, it is clearly more modern than your average stuffy costume drama. It's worth seeing for the acting and the jokes alone.