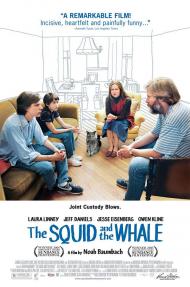 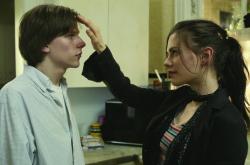 Jesse Eisenberg and Anna Paquin in The Squid and the Whale.

Although my life was nothing like the character's lives in this movie, as a child of divorce in the 1980s, I could definitely relate to some of the things that happen in it. And the scenes where the youngest son plays ping pong with his ultra-competitive father could have been almost lifted verbatim from my childhood.

Set in Park Slope, Brooklyn in 1986, The Squid and the Whale deals with the divorce of a formerly well-known writer and his up and coming writer wife, with the plot centering on how their divorce affects their two teenage sons. Reportedly the story is inspired in large part by the real life experience of its writer/director Noah Baumbach.

The father, played by Jeff Daniels is the worst kind of pretentious, competitive New York snob. People are divided into two groups for him; Philistines and those people who appreciate the right books and art. It's no wonder that his wife (Laura Linney) has been cheating on him with a string of men; a fact that he is very happy to reveal to his sons in an effort to get them on his side of the divorce.

Walt, the oldest son, is virtually a disciple of his father. He repeats his father's opinions as if they were his own. He asks his father's opinion of Dickens's "A Tale of Two Cities", which he has to read at school, because, as he says, he doesn't want to waste his time on it if it's no good.

The younger son, Frank, prefers the company of his mother and her new boyfriend, Ivan the tennis pro. He proudly proclaims himself to be a Philistine. He too though is affected strongly by the divorce and the subsequent neglect from both his parents.

Like life, there really isn't a plot to the story as such, but there are emotional arcs. The central arc involves Walt coming to terms with himself and his relationship with his parents. The Squid and the Whale mentioned in the title, while referring to an exhibit in the Natural History Museum, are also symbolic of his parents. The exhibit shows the two monstrously large sea creatures locked in eternal battle. As a child Walt was always afraid of the display and hid his eyes rather than look at them.

Although the movie only earned one Oscar nomination, for original screenplay, the performances are also excellent. And the fact that this movie was shot in just 23 days, proves the point that not all art takes years to produce.

Rather than a cinematic feel, The Squid and the Whale seems more like a short story; a feeling aided by its relatively short running time of less than an hour and a half.

Real life experiences, such as going through a divorce, might not end as symbolically or as neatly as it does here, but wouldn't it be great if they did? 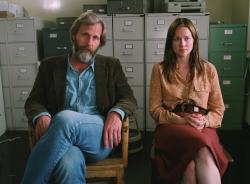 Jeff Daniels and Laura Linney in The Squid and the Whale.

The Squid and the Whale is the best movie I have ever seen about divorce. No one is perfect and no one is completely to blame in it. All of the actors play amazingly honest characters. I kept picturing the parents as Annie Hall and Alvy Singer if they had gotten married and had kids.

Walt is the most fascinating character I have seen in a movie in a very long time. He worships his father even though he really does not know him. He blames everything on his mother. The emotional arc of the story is Walt coming to see things more accurately. The symbolism of Walt not wanting to see the squid and whale fighting is obviously representative of his blindness to his parent's relationship. He wants his father's love and acceptance so bad that he follows him around oblivious to his father's rude arrogance. He even allows his father's influence to screw up his relationship with his first girlfriend.

Only as Walt starts to see his dad more clearly and remember good times with his mother does he start to see clearly. The scene where he defies his dad and goes off to see the squid and whale is his moment of truth. He will no longer be his dad's shadow nor will he blame everything on his mom.

The Academy Awards were blind to not have rewarded this movie. Perhaps Kramer Versus Kramer made divorce movie's chic 30 years ago and gay was the flavor of the year this past year, but The Squid and the Whale is a great film and deserved to be recognized as such. After all, gays as well as straight kids have been through divorces. More people can relate to The Squid and the Whale than they can two gay cowboys, but then again, Hollywood has acknowledge that they do not care about relating to middle America. 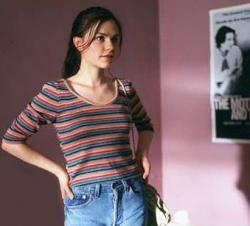 Anna Paquin in The Squid and the Whale.

This movie is poignant and realistic as my brothers have already stated. The characters are all true to life with plenty of faults and shortcomings. I liked the fact that it was almost entirely shown from the point of view of the sons. You never lose the feeling that this divorce is happening to them even more directly than to their parents.

Eric compared Bernard and Joan to Annie Hall and Alvy Singer. I didn't get that at all. Other than the fact that they all lived in New York City I see very little resemblance. Whereas Annie and Alvy were larger than life comic/tragic figures, Bernard and Joan are completely slice of life. Part of the appeal of the movie is in just how average these people seem. That doesn't do much for the entertainment value of the film but certainly adds to the realism.

There are some laughs, most of them provided by the younger son Frank (played by Owen Kline the real life son of Kevin Kline and Phoebe Cates), but the humor is still the weaker aspect of the script. Scott put it quite well when he said that in place of a plot the movie has emotional arcs. The main one is Walt's coming of age by seeing both his parents as they really are, imperfect human beings.