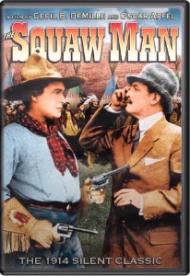 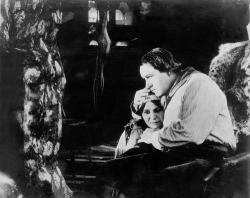 Cecil B DeMille's The Squaw Man is historically important as the very first feature length movie ever to be shot in Hollywood. The year was 1914 and this tiny little farming community near Los Angeles would soon be transformed into the movie capital of the world. The Squaw Man also marked DeMille's directorial debut (technically he co-directed with Oscar Apfel) one full year before Griffith made The Birth of a Nation. More than anyone else in the history of film, DeMille would come to represent the icon of the silent movie director, flaired pants tucked into knee high boots, megaphone in one hand and riding crop in the other, barking out orders to vast crowds of extras. Yes, we owe all the trappings of the classic Hollywood epic to Mr. DeMille, ostentatious, extravagant sets, gaudy - even vulgar - costumes, pious religious themes and of course sex, sex, sex.

Many of these concepts, albeit in a primitive form, are already present in his first movie. Scenes range from a wealthy British estate, to an ocean crossing ship that catches fire, to Times Square in New York City, to the rugged Wyoming countryside and even the Swiss Alps. Places that Hollywood, with ocean, desert and mountain all within a few hours of each other, could easily act as stand in for. Upon its release The Squaw Man was an immediate box-office sensation and DeMille liked the story so much that he would remake it twice. Once just a few years later in 1918 and then when his career was having trouble adjusting to sound he made a talking version in 1931.

The plot concerns a British nobleman, who is mistakenly accused of flirting with his cousin's wife and of embezzling charity funds. To save the family any disgrace - even though he knows his cousin Sir Henry is guilty - he sets off for America where he eventually finds himself in the Wyoming wilderness. When he gets caught in a snow storm in the mountains a young squaw named Nat-U-Rich saves him from freezing to death and they get married and have a child together. They also do battle with a villainous cattle rustler by the name of Cash Hawkins. This interracial love affair, of course, ends tragically. Nat-U-Rich dies in her man's arms in the final scene of the movie.

Unfortunately, DeMille stereotypes Native Americans in much the same way that Griffith did blacks in Nation. The chief of Nat-U-Rich's tribe is shown as a lazy man who can be bribed by the mere sight and smell of alcohol. At the same time, however, DeMille should be given some credit for tackling the taboo subject of interracial love even if it is done with an old-fashioned mind set.

The Squaw Man provides tangible evidence that Cecil B DeMille is the true father of Hollywood. 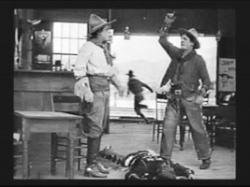 Although quite crude by today's standards, this early feature is quite epic in scope. Unfortunately, the story must have been creaky even in 1914 and the melodrama is slopped on with a trowel.

DeMille's first choice of location to shoot this film was Flagstaff, AZ, but they arrived there in the middle of a storm, so they simply remained on the train until the end of the line, which happened to be Los Angeles. DeMille and his crew were able to make good use of the California climate as a stand-in for the film's various locations, although the scene shot in the "Alps" looks exactly like it was filmed on a hill in California, which of course it was.

At just 70 minutes the story covers quite a bit of ground, some of which feels like padding. There's a fire on the boat that Jim takes from England to New York that does little but provide some momentary excitement. In New York City, Jim catches a pickpocket and then decides to move to Wyoming at the mere suggestion of it. And in an astounding coincidence later, the love of his life and his cousin the cad decide to take a vacation in the same state.

The character of Tabywana is fairly stereotypical, but I wouldn't go so far as to say that DeMille is as guilty of racism as Griffith was in Birth of Nation, simply because we only really see two Native Americans in the whole film, apart from a crowd scene at the end.  We can't really tell if DeMille is saying all Indians are drunks or just this one. Nat-U-Rich is shown to be quite resourceful and without her father's weaknesses. We are shown an interracial marriage, but there doesn't seem to be a great amount of passion involved. When Nat-U-Rich dies at the end, Jim laments the loss of the mother of his child rather than the love of his life.

I've seen worse acting in silent films than what is done here, but I can't say that any of the actors do much of a job. Dustin Farnum reprises the lead role that he performed on stage and much of his performance seems to be aimed at the balcony. He would appear in 42 films from 1914 to 1926, many of them westerns, but this is probably the only one of his films that's still remembered today and it's not because of his acting ability.

As Patrick said, this is a historically important film, but great entertainment it is not. 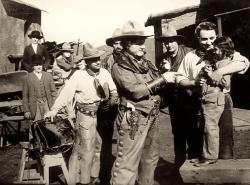 Dustin Farnum as James, proudly showing off his son in The Squaw Man

What I found interesting about The Squaw Man was how it compared to modern films. So many scenes were filmed outside, which was the norm for silent films as they used natural lighting to film by. This is most commendable where DeMille filmed the snow blindness scenes. Years later, studios became lazy and filmed outdoor scenes on sound stages made to look like they were outside.  Such films as Deck the Halls (2006), had large "outdoor" sets built on a sound stage with tons of fake snow sprayed around. It looks no where near as good as this grainy black and white film.

What DeMille did not do very well was edit and change scenes. In one shot a woman appears to teleport out of the room, instead of walk out of it. In another scene, Nat-U-Rich and James get married and then suddenly the scene jumps some six years into the future in the exact same location, with their child playing with the hired help. There are no title cards to announce what just happened.

I like how Nat-U-Rich tells James she is with child. He finds her making baby size moccasins. I agree with Scott, James was not all that in love with her, although she was very much in love with him. James just kept her around as gratitude for what she did as well as for companionship, and obviously sex. Still, he was honorable enough to marry her after he knocked her up. Although when he decides to send their son to England, he does not even consider her opinion on the subject.

Scott mentioned the coincidence of the folks from England running into each other in Wyoming, while another plot point seemed odd to me. Nat-U-Rich killed Cash Hawkins some six years before the sheriff and posse come for her. Was he really too busy all that time to find her?

Although flawed both in script and technique, The Squaw Man is a must see for all students of film and American history.