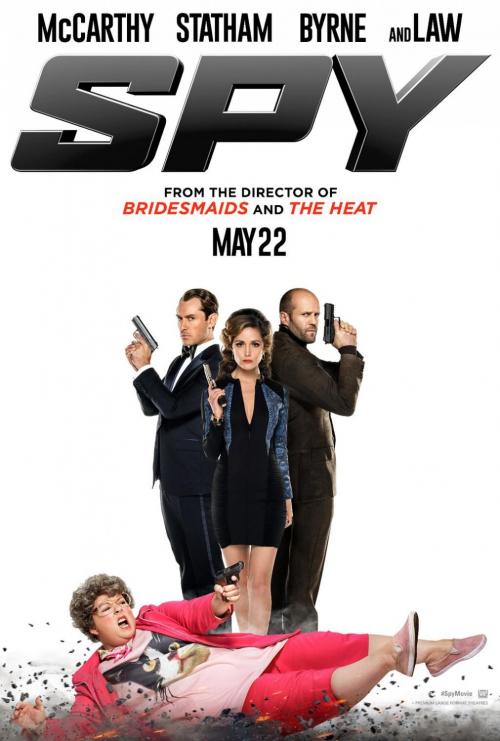 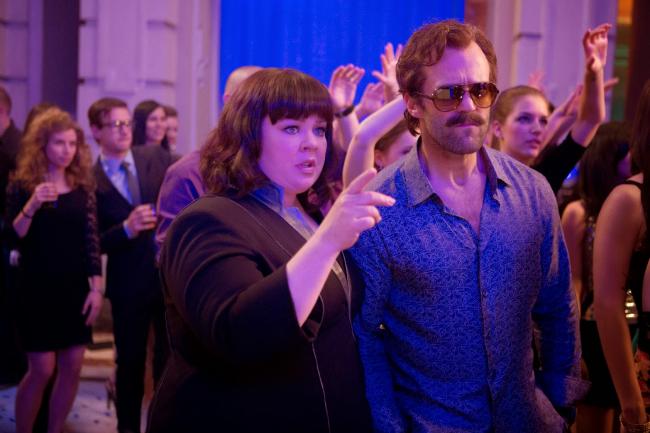 Melissa McCarthy and an in-disguise Jason Statham in Spy.

Writer/director Paul Feig is a self-confessed spy movie fan and he revealed in an interview that he was inspired by 2006's Casino Royale to begin work on his own spy film, because as he put it, "No one was ever going to let me direct a real James Bond movie." The result is Spy, the third collaboration between Feig and star Melissa McCarthy after Bridesmaids and The Heat. It's an often hilarious comedy set in the world of international espionage that shows a real affection for the genre by spoofing it, but never mocking it.

McCarthy plays Susan Cooper, the partner of Jude Law's Bradley Fine. They both work for the CIA, but while Fine gets to work in the field, Cooper stays at headquarters providing him with back-up and intelligence via an earpiece and contact lens mounted camera worn by Fine. Their current assignment is to track down a stolen nuclear explosive, but after it is revealed that the identity of all of the CIA's main agents are known to the villains, it's decided to send in Cooper to investigate since her face is unknown and no one would ever suspect her of being a spy. But can this out of shape analyst fit into the glamorous world of espionage in time to save the world?

The cast is universally splendid. I've found McCarthy funny in the past, but have also found her improvisations to be wearing when overused as they often are in her films. This time around though she seems to be sticking mostly to the script and ends up creating her most well rounded character as a result. Jude Law in a tuxedo looks more like the James Bond described by Ian Fleming than any actor who's ever played the real Bond. Rose Byrne, who has the looks to play a Bond Girl, instead plays the villain here and makes a nice foil for McCarthy. British comic actress Miranda Hart, in a part written specifically for her by Feig, plays Cooper's bumbling sidekick and provides some laughs, while another British actor, Peter Serafinowicz, plays Aldo, a horny Italian agent.

It is Jason Statham however, who nearly steals the entire movie as Nick Ford. His expletive filled rants and exaggerated tales of his exploits are some of the movies funniest moments. "I once drove a car off a freeway on to a train while I was on fire. Not the car. I was on fire." He's one of the spies who has been grounded because his face is known to the enemy, but he has no respect for Cooper and so goes rogue to "help" her with the mission. He has a lot of fun sending up his own persona as a tough guy action star and is one of the film's biggest and most welcome comic surprises. McCarthy has said in interviews that she had the greatest difficulty keeping a straight face during his intense monologues and Law referred to him as an untapped comedy genius.

Sure, there are several over the top silly moments here and there's nothing subtle about the comedy, but enough of it works to make this the funniest movie of the summer so far. There's enough life in this character and the concept to support a sequel. So long as they get the same cast back, with Statham being a must have, I'd line up to see it. 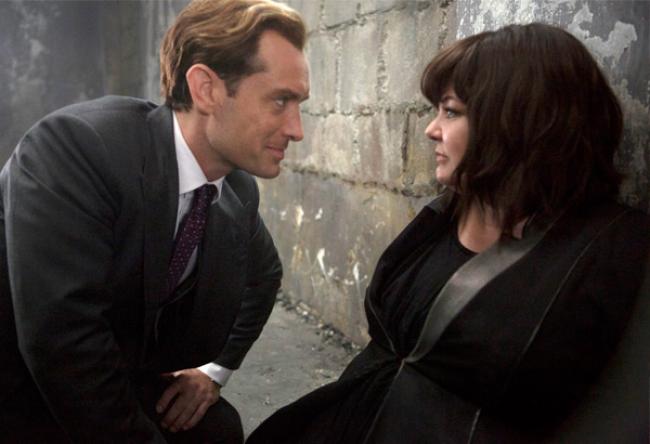 Jason Statham is definitely a comic surprise. I looked forward to his every screen appearance and wished it was more often. With his exaggerated tales, he is simultaneously honoring and mocking both Jason Bourne and James Bond, much as Paul Feig is doing for all such spy films with this comedy. As Scott noted, Spy walks a delicate line here, spoofing the genre while also paying homage to it.

I too have found Melissa McCarthy to be a hit or miss actress. As Susan Cooper however, she makes a bull’s eye. Cooper is a character perfectly suited to her strengths. She is at first a love struck puppy, pining for Bradley Fine, a man we all know is way out of her league. Throughout the course of the film, she grows as a person, improvising when in pressured situations. Look at the story she makes up on the fly when a gun is aimed at her on the plane. It is in those moments that we see her come into her own. By the end of the movie, it becomes obvious that Cooper is actually too good for Fine.

Scott made reference to Jude Law being a perfect James Bond. He is at first presented that way but we later see that he is not the hero but the Bond babe. McCarthy has to save him and all anyone ever compliments Fine on are his looks. He may start the film looking like 007 but by the end he is just a damsel in distress that owes Cooper a good lay for all her efforts in saving his ass. In fact, just as in most James Bond films, Cooper ends up in bed with a man, “Quit screaming. You loved it.”

Some men, none on this web site, complained that Mad Max: Fury Road (2015) was emasculating as Charlize Theron had as much or more action scenes than Tom Hardy as Mad Max. The same could be said here. This is most obvious in the climax when Fine is taken out by a superficial bullet wound to his arm and Ford by his coat being caught on a door handle. This leaves Cooper to take out half a dozen armed men all by herself while the men on her side stand worthlessly by. Okay, she does get help when Rayna slides the gun over to her, but still, couldn't the writers come up with something for the guys to do besides seeming helpless?

The jokes are plentiful and the pacing perfect but the plot is a bit lacking. Later in the film we find out that Cooper’s cover was blown long before she thought it was. If that is true then none of what happens in the last half of the film makes much sense. Another downside is that they tried to glam up McCarthy for the casino scene. Her charm is that she is not and cannot be considered as such. She is as earthy as they come and to pretend otherwise is futile. We love her because she seems down to earth. As long as she is written that way, I will eagerly watch a sequel if they choose to make one. Also, as Scott suggested, Statham and much of the original cast has to come back to reprise their roles. Can’t you just see Cooper and Ford going under cover as a married couple, with Fine being the voice in Cooper’s ear and there is so much unsettled sexual tension with Aldo to be resolved.

Spy is a winning comedy that breathes some fresh air into a well-worn genre. 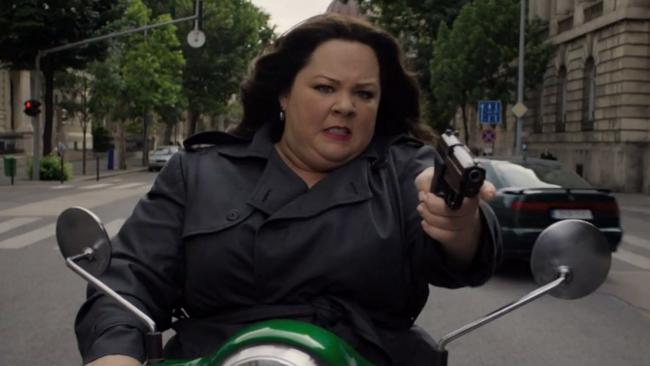 I too thoroughly enjoyed this movie. McCarthy is great, as is the entire supporting cast. The script is solid and the action scenes are well-done. The fight scene in the kitchen between McCarthy and Nargis Fakhri in particular, is destined for classic status. It's splendidly choreographed with the precise comedic timing of Lloyd or Keaton. It's funny as hell and at the same time is also one of the more brutally physical hand-to-hand combat scenes between two female characters you're likely to find in a Hollywood comedy.

Besides being a wonderful spoof/homage to 007, Spy is progressively feminist in the way it turns traditional cinematic gender roles on their heads. It's a fantasy for women, but especially for those women who are easily overlooked because they're not drop-dead gorgeous. In fact Melissa McCarthy goes toe-to-toe with several exotic deadly sex-kitten type female agents and gets the better of each of them. Of course she also beats up the boys. Eric, the climactic fight scene you mentioned was, I think, intentionally intended to turn the tables, gender-wise, on the genre. Of course it was also meant to be funny.

I agree that Jason Statham and Miranda Hart are scene stealers but my favorite scenes were those between McCarthy and Rose Byrne. Byrne makes a great “mean-girl” constantly insulting and belittling McCarthy. That is when she isn't ordering her about like a servant. The two actresses have an undeniable comic chemistry together and, adding to Spy's feminist credentials, several of their scenes pass the Bechdel test with flying colors.

What I love most about Melissa McCarthy's career is that she's one of the very few overweight comedic actresses ever given lead roles in movies. There have been obese leading comedic actors since the dawn of Hollywood. And on top of that she's playing a full-fledged action star. Spy is not only one of the funniest movies of the year it's also quite groundbreaking in a lighthearted and very entertaining manner. (but it runs about 20 mintues too long)