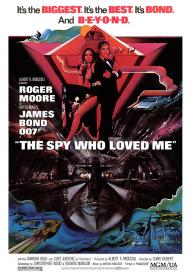 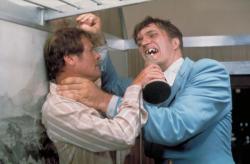 Roger Moore and Richard Kiel in The Spy Who Loved Me.

The Spy Who Loved Me is the best example of a Roger Moore James Bond movie. For Your Eyes Only is a better movie, but what makes that one good is that it suppresses most of the things that makes Moore's Bond unique. Moore's Bond is all about gadgets and girls and over the top action and an easy-going charm. His Bond is never tense and never works up a sweat. Most of the time this makes for a really bad movie, but with The Spy Who Loved Me the formula works (for the most part anyway).

Unlike Moore's first two forays as Bond, this one has a coherent plot. In some ways it has You Only Live Twice's plot, but it's still a plot. Like that earlier Bond, someone is stealing Russian and American ships as the means of starting a war. The difference is that this time it's nuclear submarines that are being stolen instead of spaceships. Bond must join forces with Major Anya Amasova (Barbara Bach), aka Russian secret agent XXX, to track down the missing ships. The trail leads them through Egypt and into Sardinia and eventually to the submersible lair of Karl Stromberg, a megalomaniac who wants to destroy the world, not as a means of making money, but because he wants to remake the world into some kind of underwater paradise.

One of the best and most famous stunt from all of the Bond series takes place during the precredits sequence. Bond leaves a cabin in the mountains (where he's been sleeping with a beautiful woman of course) and is chased on skis down the mountain. He ends up skiing straight off a cliff, but as he plummets he pulls a cord and a parachute comes up out of his backpack and as it unfurls, you realize that the parachute has the Union Jack emblazoned boldly upon it. It's completely over the top, but also pretty awesome.

For the first time in the Moore Bonds, an attempt is made to provide some character to Bond and to the Bond girl. Bond has a moment of humanity when Anya mentions his dead wife. Anya herself is mourning a lover who turns out to be one of the men who Bond killed at the beginning of the movie during his escape down the mountain. Not the deepest of moments for either of them, but it's refreshing to see after the flatness of Bond in the previous two films. And this one character note alone is enough to make Anya the best Bond girl of the Moore films.

The movie isn't perfect by any means. It's biggest flaw is the character of Jaws. You know, the big guy with the metal teeth. There's actually nothing wrong with the character; Bond has a history of fighting unusually strong and odd villains. What's wrong with him is that he won't die. He's like the Wily Coyote in this movie. He's "killed" several times, but always survives, even from a huge car crash. Unfortunately, he makes a return appearance in the following movie.

Moore's Bond loves his gadgets and in this movie it's his Lotus Esprit that is the main one. While the Aston Martin had its share of gadgets, the Lotus makes it seem pale in comparison by turning into a working submarine, complete with torpedoes. This could have gone so wrong, but again, I have to say, it works here. The writers and directors get the tone just right with this one. It's not even in the same world as the Sean Connery Bond and by no means are they the same character, but damn if I wasn't entertained by it all.

If you wanted to show someone one movie that best represented Roger Moore as Bond, this would be the one to show them. It walks a fine line between cartoon and entertainment. Moore still looks young enough to play the part and he's at his flippant best. There's some genuine tension and some genuine laughs. It's still not my idea of what James Bond should be, but somehow it works. 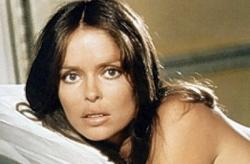 I agree completely. The Spy Who Loved Me is the best of the Roger Moore type Bond movies. For Your Eyes Only is a better movie per se, but any other Bond actor could have done that movie without it being any less. Only Moore’s Bond could play opposite Jaws without looking ridiculous.

Bach is hot and has a quick scene early on that is rare in a James Bond movie. It actually shows another guy in bed with a woman. This movie works the teaser into the story arc better than most Bond movies. For Your Eyes Only has a teaser that has nothing to do with the rest of the movie.

Not only is this one of Moores best Bond movies, it is one of my favorites for its locations. I have always been fond of Egyptian settings. The ruins are too ancient and fascinating to ignore, although M having an office inside of one is utterly out of place. Bond’s car is delivered to him on a dock in Sardinia. The city is Palau, on the northern coast of the island. I walked on that pier everyday for two years to get to my ship when I was in the navy. Although that certainly helps me to think fondly of this movie, I would like it just the same even if I had never lived there. 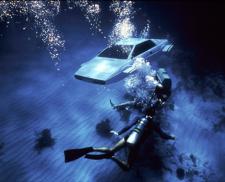 Bond brazenly beds a bevy of beautiful babes in this movie. I know he does in all of them but this one seemed to have more than most. I wonder if anyone has ever counted them all up to see which movie has 007 doing the nasty with the most chicks. I agree that Barbara Bach is a memorable Bond babe. Not only is she ravishingly gorgeous but her character is likable and interesting.

This movie, like all Bond movies, reflects the times in which it was made. The use of the shark, the character Jaws (whom I enjoyed by the way), and the disco music that underscores many of the action sequences blatantly place this in the late 1970’s. As a child I thought of Roger Moore as a fairly old man playing Bond, but now to my 42 year old eyes he looks quite young here.

This movie contains a couple of other elements that make up nearly all the Bond movies. There is the moment where the bad guy plans to elaborately kill Bond instead of just shooting him when he has the chance. Stromberg lets Bond and Anya leave his floating fortress before giving the order to, “Take them to shore and then kill them.” The other thing is the ending. Bond gives one of his trademark double entendres. When asked what he is doing lying naked with Anya he answers, “Just keeping the British end up.”