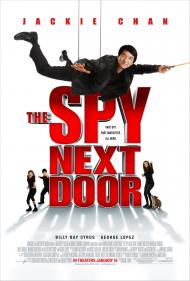 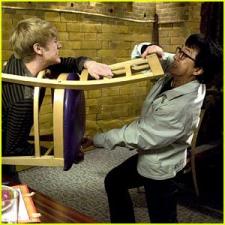 Jackie Chan is a pain in Lucas Tills neck.

Considering the resemblance to The Pacifier, and many other films, I imagine The Spy Next Door could have been written in an afternoon. Every character is a cliche and every joke was old on The Brady Bunch.

Bob Ho is a retired Chinese agent, on loan to the CIA. He lives undercover in the United States. He is in love with his neighbor, Gillian, with whom he wants to marry. She has three kids and turns down his proposal until they learn to like him. Before you can say Uncle Buck, there is a death in the family, that sends Gillian out of town and Bob baby sitting.

Bob has no clue how to do such routine things as make breakfast and put kids to sleep. These are intended to be funny scenes. You may find them so, if you are young enough, or thought The Game Plan was an awesome film.

Gillian's kids are all movie stereotypes. The youngest, Nora, is a cutie who learns to like Bob quite easily. The son, Ian, is the brainiac nerd who wants to attract the ladies. The oldest daughter, Farren, bitches about everything. She is unlikable, until she has a moment with Bob where she reveals her past. It seems way out of place in such a light film. It seems there just so Chan can have a line about family not being blood but who you love.

Bob's last mission involved capturing some Russians who stole some information. The Russians escaped and Gillian's son unknowingly downloaded the information onto his Ipod. The Russians come looking for the Ipod, forcing Bob Ho back into action. He becomes their protector and, just as in Old Dogs, their hero.

I kept waiting for a Miley Cyrus or Hannah Montana reference. Her dad, Billy Ray, plays a long haired spy with a country accent. Lucas Till, who played her boyfriend in The Hannah Montana Movie, plays a Russian agent here. At one point Billy Ray picks up Ian's Ipod. It should have been playing one of her songs, so he could have rolled his eyes and turned it off.

Although this is a family film, it misses another opportunity for a great joke. When Bob Ho proposes to Gillian, he should have said, "Marry me Gillian. Let me make you a Ho." Hey, it is funnier than any joke you will find in this movie.