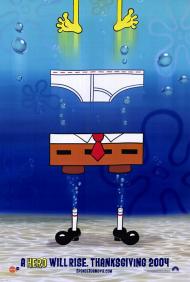 Unlike the more sophisticated cartoons from Disney, which usually include a few jokes for the adults, Nickelodeon's cartoons seem to be unashamedly aimed just at children. While this can sometimes leave adults in the audience quite bored, in the case of The SpongeBob SquarePants Movie the story is so good-naturedly silly that while not exactly challenging, it should keep even the grown-ups at least smiling.

When the evil Plankton steals King Neptune's crown, it is Mr. Krabs who is framed for the crime and it is SpongeBob, assisted by his dimwitted starfish companion; Patrick, who volunteers to retrieve it, despite the fact that Mr. Krabs recently passed SpongeBob over for promotion at the Krusty Krab. Helping SpongeBob and Patrick on their quest is a mermaid princess, voiced by Scarlett Johansson. Against them is the assassin, voiced by Alec Baldwin, hired by Plankton to stop them from retrieving the crown.

While it's not a full-fledged musical, there are a few songs thrown into the mix, with SpongeBob and Patrick's, "We're men" song being the funniest, but it's the "I'm a goofy goober" theme song that will stick in your head for days afterwards.

Likable silliness is the key to this movie. It is all presented in such a fun way that it's hard not to at least smile, no matter how childish it becomes. Plankton's over the top ranting as wannabe dictator provides some of the movie's best laughs. And the climactic battle between SpongeBob and the assassin takes place on the back of David Hasselhoff (one of the few live action human's in the film) while he's slicing through the water with seemingly superhuman powers.

If this movie does anything, it proves that the current G rating for movies is completely meaningless now, because somehow this one ended up rated PG, for supposedly crude humor. Maybe that's because we see Patrick the starfish's naked bottom in one scene. Whatever the 'reason', this is a movie that young children should enjoy and parents shouldn't be bored through. 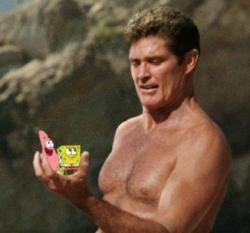 The charm of SpongeBob is that he is perpetually optimistic and nice. This guy actually loves to go to work. He is an expert in The Krusty Krab sales pitch, Poop. Which, anyone who watches the show knows, stands for "People order our patties." SpongeBob relishes working there. Even when his co-worker, Squidward, can't cut the mustard, SpongeBob is there to help him ketchup.

My favorite episode of the television show is the one where SpongeBob and Patrick are playing in a cardboard box in the front yard. Squidward, who lives next door, goes absolutely insane because the two friends have so much fun and he can't understand why. Squidward represents adults. SpongeBob represents children. He and Patrick are simply using their imagination but Squidward does not understand.

Working at The Krusty Krab is a chore for the adult Squidward where as the childlike SpongeBob is easily excited by it. This set up makes the show work and relatable to children and adults. The movie lacks this angle. Squidward is barely in the movie. This creates a void. Without Squidward's crotchety personality, there is nothing to balance SpongeBob's cheery disposition.

Sure, there is a villain who wants to take over the world, but he is to over the top to relate to. This movie is occasionally entertaining and as Scott wrote "silly." I even laughed out loud when SpongeBob stepped on Plankton. However, SpongeBob without Squidward is like a Krabby Patty with cheese without the cheese. 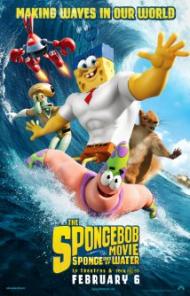