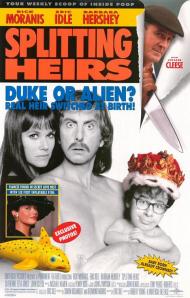 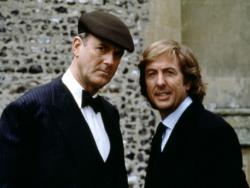 Of the five members of Monty Python who regularly performed in front of the camera, only John Cleese and Eric Idle ever made any kind of serious attempt to produce a mainstream comedy that would be a hit in the United States. Cleese had A Fish Called Wanda, which was a huge success and won awards, while Idle had Splitting Heirs, which wasn't and didn't win anything. Although there's certainly not a question that Wanda is the better film, Splitting Heirs does still provide some lowbrow laughs, especially for Python fans.

Idle wrote and stars as Tommy Patel, a man who discovers that he is in reality the heir to Dukedom of Bournemouth, but due to a baby mix-up when he was accidently abandoned in a restaurant, he was instead raised by an Indian family in West London, while the other baby, Henry, would grow up to inherit the title and the money. By coincidence, Tommy ends up working for the Bournemouths and discovers the truth. A shady attorney, played by a scene stealing John Cleese, convinces Tommy that if Henry dies, Tommy will have a better chance of getting his hands on the Dukedom. But will Tommy murder Henry, who has become his best friend?

Perhaps the most glaring problem this movie has is that Idle is about 25 years too old for the part. Tommy was supposedly born in the 1960s, which would put him around 30 or younger. Idle was 50 when this movie was released. Henry should be the same age as Tommy, and to be fair they do look close in age, only that's because Moranis was in his 40s at the time. Barbara Hershey, who plays Tommy's mother, was in fact 5 years younger than Idle. Cleese's Shadgrind is the attorney who handled Tommy's adoption, which means he was practicing law in the 1960s and must be at least 20-some years older than Tommy, but Cleese is only 4 years older than Idle and no attempt is made to make him look older. Only Catherine Zeta-Jones, in her first big movie role, is age appropriate at 24.

The biggest reason the age differences don't overly bog the story down is that it is all kept so light, that it's difficult to take any of it seriously. This is a farce and isn't meant to be analyzed on any kind of serious level.

While there are some funny lines and shenanigans, it is the likability of the cast that really sells the comedy. Idle has a cheery charisma that holds it all together. Zeta-Jones has never looked better than she does here and her split second nude scene and time in a bikini practically justifies watching this movie on its own. Hershey provides some laughs as the cougar (before that phrase was common) stalking Tommy, unaware he's her son. As Zeta-Jones' Kitty describes her, "That's Henry's mother, the black sheet in the family. She took so many strokes in the 60s they called her the U.S. open." Only Moranis seems miscast. He's been funny in other parts, but comes across a bit annoying here. I've always had the impression that he was hired as to have an actor that would be familiar to American audiences, but they should have gone a different route. Since Tommy is jealous of everything Henry has, they should have cast a leading man type in the role, and not short, bespectacled Moranis.

Some of the humor is a bit childish and some of it is groan inducing, such as the pun, "Get me out of this moose", but enough of it works and the running time is short enough, with a brisk pace, so that it never really stops entertaining. Just don't expect a comedy classic.

It's ironic perhaps, that Idle meant this to be a mainstream hit in America, but is now only really remembered by Python fans. Sadly, it also marks Idle's last major foray into film.

Yeah there are some amusing moments and a few funny lines but this farce misses the mark. Fortunately, as Scott wrote, it runs less than an hour and a half and maintains a brisk pace throughout. Idle’s chin waddle is distracting and it gives away his age although his full head of hair and thin frame enable him to appear age appropriate from behind.

I agree the cast is good with Cleese and Hershey battling to see who can steal the most scenes. John Cleese as the unscrupulous attorney Shadgrind has this hilarious line, “People were sex-mad in the 60s, seemed to do it just for fun... Weird.” Barbara Hershey cracked me up in the scene where she makes sexual faces at Idle not yet realizing he is her long lost son.

Although I have to say it is weird that she appears to be significantly younger than her son. Didn’t anyone tell Eric Idle that he looked far too old for this role?

He does get some funny lines as well, such as when he tells Sadie Frost, “You don't have to worry about me, dear. I'm bi-sexual. Whenever I want to have sex, I have to buy it.” His cheerful brand of idiocy is likable and amusing and I enjoyed the song he sings over the end credits.

I agree that Rick Moranis is dull here, although to his credit that is partly due to how his part is written. Apparently rollerblades had just come out when this movie was made as a big deal is made out of Moranis wearing them into the office building at the beginning.

In spite of a valiant effort to be funny Splitting Heirs is a farcical mess.

Of all the Monty Python alumni, none has sought movie star status as adamantly as Eric Idle. As Scott reads that, I imagine he is thinking, "What about John Cleese?" To that I write, although you could make that argument, John Cleese's biggest success in film, away from Monty Python, was with A Fish Called Wanda. In which Cleese was part of an ensemble cast. The film did not rest solely on his shoulders. In fact Kevin Kline stole that film out from under him. Idle, for a period of time, made the effort to star in films such as this and Nuns on the Run, in which he was the actual lead.

He succeeded in helping to prove that none of the cast of Monty Python, including Cleese, is leading man material. Idle and all the rest work much better in ensemble comedies or in smaller roles. None have the charm to carry a film alone. This is likely one reason they so often worked with each other.

For Splitting Heirs, Eric Idle teamed up with Rick Moranis, who is another comedian who should have never attempted to go beyond a supporting role. Together, their two halves do not equal a whole. Neither is charming enough or, let me be completely blunt, good looking enough to be the movie star they each aspired to be. As superficial as it reads, we all like our leading actors and actresses to be at least somewhat attractive.

There are some laughs to be found here and my brothers mentioned some good lines. I will add a couple. When the Butler walks in on Henry, he asks, "Drunk again, sir?" but Henry takes it as a statement, "That's okay, Butler. So are we." I liked Idle's sarcasm when the adoption agent tells him of his mother, "She insisted that you were adopted by a member of the working class to save you from the curse of money." and Tommy replies, "How very thoughtful." The slapstick however, rarely works. Scott mentioned the moose head while I will add the scene where Idle tries to drown Moranis with the pool vacuum.

Like my brothers, I found Idle horribly miscast in his own film. He wrote the script and songs featured, as well as acted as executive producer. Clearly he did not understand that his time in front of the camera had expired. Consequently, since Splitting Heirs, Idle has done lots of voice work in animated films and television shows.