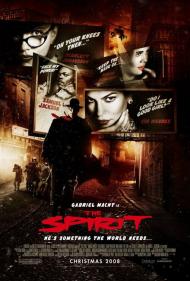 The Spirit and a former lover, Plaster of Paris.

I saw The Spirit several days ago and have been putting off writing this review because it left me feeling absolutely nothing afterwards. It is not good enough to pile praise on it and not lousy enough to make fun off. It is the worst kind of film for a critic to review.

The Spirit is a super hero, whose only power is that he heals and seems immortal. This, he discovers in the movie, is due to the evil Octopus experimenting on him after he was shot on the job as a policeman. He now lives in a cemetery and answers cries of help from Central City.

The movie’s best asset is the ever presence of cleavage. Johanssons big pearly globes are proudly displayed in a particularly odd scene featuring a foot with a head. Another well endowed character named Plaster of Paris is nicely dressed as a belly dancer sent to torture and dismember The Sprit. The hottie in the movie though, is Eva Mendes. She is dressed to thrill the entire time, and in one scene, undressed to thrill.

The movie has the visualized look of Sin City. It tries for some laughs, but they come across more as absurd than laugh out loud funny. For some reason, Octopus and his chesty assistant dress as Nazi’s for no apparent reason in one scene. All of his cloned henchmen look and act like Curly from The Three Stooges. They are sometimes funny and sometimes just stupid.

Macht is adequate as the masked superhero. The only requirement he actually had to have to get this role is to be in shape for the shirtless scene. He is often in shadow and his mask never comes off. Anyone, and I mean anyone could have played his role.

For a movie with an unoriginal style, an over the top bad guy and plenty of hot babes, The Spirit takes itself very seriously. Too seriously. With all the hot tail chasing after him, The Spirits only interest is in Central City, “My city screams. She is my lover. And I am her spirit.” In fact, for a superhero movie, this film has more dialogue than action. 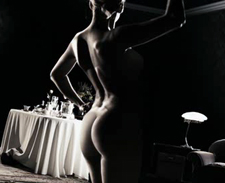 Here you go, the only thing in the whole movie worth seeing; Eva Mendes' nude bottom.

For the first twenty minutes I thought this was quite possibly the worst movie I'd ever seen. The opening fight scene between the Octopus and the Spirit is so ridiculous and the dialogue so god awful that I was dreading watching the rest of it. It finally dawned on me that this movie wasn't trying to be so serious that it was bad, it was trying to deliberately be funny. This really doesn't make it any better, but it made me feel better about the actors involved with it. I mean any movie with characters named Sand Serif and Plaster of Paris is obviously saying, "Don't take me seriously."

So once I realized it was supposed to be a comedy instead of just being unintentionally funny, I sat back prepared to laugh at the rest of it. It's too bad that despite wanting to be funny, it never gets any further than slightly groan-inducing. The humor mainly comes from the over-the-top and melodramatic dialogue and the way the Spirit can charm any woman. Too much of it though is just weird and not funny. The head on the foot. Samuel L. Jackson and Scarlett Johansson in the Nazi uniforms. Jackson's obsession with eggs. They're odd, but they're not very funny. And the stupid henchmen are just that, stupid.

Eric, you're so right about Macht. He's got nothing but some chiseled abs. He looks enough like Josh Hartnett that I wonder if that's who they wanted for the part, but when he turned them down, they went with a lookalike instead. Either way, he doesn't have the charisma to play the part seriously or the comic timing to play it funny.