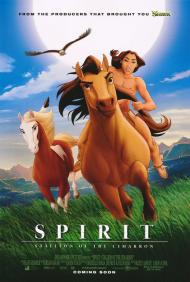 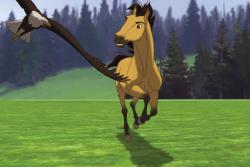 Spirit: Stallion of the Cimarron

Animated movies are just like live action movies in that the same things determine whether or not the movie will be successful. Plot is the single most important aspect to a movie whether it is animated or live action. Too many animated films seem to not understand this.

Titan AE and Disney's Dinosaur both have some of the greatest animation to be found in a movie. Both however lack in the plot area. The 2 Toy Story movies are wonderfully illustrated as well as well plotted. The Toy Story movies animation will eventually be antiquated but they will remain classics because of their wonderful stories.

Spirit is another animated movie where plot and story take a back seat to illustration. Yes, the backgrounds are lush and beautiful. The horse racing across the great old west is excellently drawn. The plot however, is simple and rather dull.

Spirit, a stallion, gets caught by soldiers who can't break him. Stallion escapes with indian he befriends. A little adventure ensues and all is well.

Matt Damon, that amazingly voiced thespian, (read as sarcasm) narrates this movie. The horses themselves do not talk. They communicate with expressions and gestures, but hey, their horses. What could they have to say? "Lets run and be free." "This grass tastes pretty good." "Do these shoes make my ankles look fat?"

At one point in this movie Spirit is involved with building train tracks. If perhaps Spirit would have gotten around the west better this movie could have been used as a history lesson. Instead we get lots of scenes of horses running.