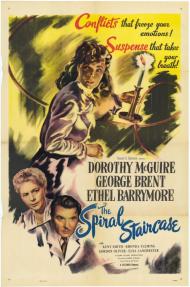 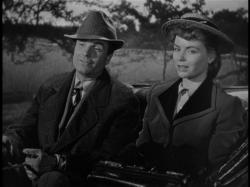 The Spiral Staircase is set in a New England mansion shortly after the turn of the 20th Century. It is the quintessential “It was a dark and stormy night" movie. It stars Dorothy McGuire, George Brent and Ethel Barrymore.

McGuire is Helen, a mute young woman who works for the bedridden matriarch (Barrymore) of a wealthy family in a small New England town. A town where someone is killing young women, women who all have some sort of physical deformity or imperfection.

As the movie opens the main action is in a hotel lobby showing an early silent movie. Upstairs in one of the rooms a woman with a club foot is discovered murdered.

The killer follows Helen from town and we quickly realize that he is in the mansion. Director Robert Siodmak does a great job at building the suspense. We see several eerie close-ups of one of the killer's eyes but his identity is not given away (although to be honest it is fairly easy to figure out who the guilty psychotic is).

As the movie (and the stormy night) progresses there are really only two suspects. They are brothers. They share the same father but a different mother. Ethel Barrymore is the mother of the younger brother played by Gordon Oliver. George Brent is the older brother, a professor who lives with his stepmother. The younger brother has recently returned from living abroad.

Elsa Lanchester plays the alcoholic maid. She is best known for playing the Bride in The Bride of Frankenstein, here she supplies the comic relief.

The suspense keeps building throughout the movie, leading to a truly memorable climax that takes place, of course, on the mansion's spiral staircase. I won't give the details away but it is a great ending both symbolically and action wise.

Many of today's movies could learn a thing or two about pacing from these old black and white movies from the studio era. This one packs a lot of plot and character development into a scant 83 minutes.