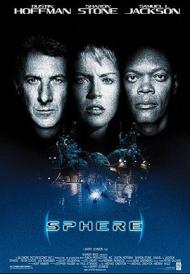 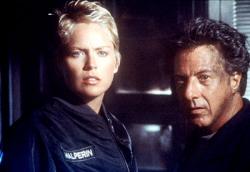 Sphere is based on the Michael Crichton novel. Like a good book, the movie gets you interested in the characters with a great setting. However, the message at the end of the movie practically bludgeons the audience over the head.

A group of scientists go to the bottom of the ocean to explore a 300 year old spaceship. The spaceship is still functioning and the scientist try to figure out how it came to be there. On the spaceship they discover a huge “living" sphere. Through their own computer they are able to talk to the sphere who calls himself Jerry and tells the scientist that he is happy. Which prompts Dustin Hoffman's character to ask, “What happens if Jerry gets mad?"

Three of the crew members, on different occasions go inside the sphere. Before you know it, all kinds of weird things start happening. Jelly fish appear out of nowhere and kill Queen Latifah. A giant Squid shows up after Samuel L. Jackson starts reading 20,000 Leagues Under the Sea. Sea snakes scare the crap out of Hoffman.

Crew members start getting killed until only the three who entered the sphere are left. Each becomes paranoid and thinks the other two are causing the problems. To make a tedious story short, they finally realize that the sphere granted each of them, somehow, the ability to manifest their thoughts into reality.

The cast does alright for what it required of them. Hoffman is good as the therapist. His best scene is when he talks to Jerry like Jerry is a child that he is scared might get upset. Stone has a good line that would make Mae West proud when she says, “Is there heat coming off this thing or is it just happy to see me?"

The end of the movie has the three survivors discussing their new abilities. They talk about how they manifested there nightmares. They discussed how they could use their powers for good. The obvious symbolism of being able to dream and do good things instead bad is more annoying than thought provoking. Man can do good if he only chooses to. Duh!

As a science fiction/mystery Sphere works very well. Isolating a group of people with a strange entity is always ripe for suspense. However, they never actually discover all of the details as to where the sphere came from and what it was doing there. The message about man having the power within himself to do good in the world is a horrible pay off. With such a great set-up I had hope for something more exciting.