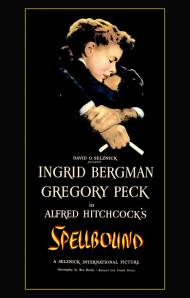 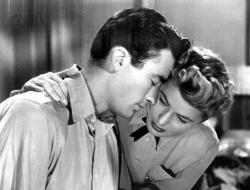 Spellbound is an artistic, yet long winded Hitchcock film noir. Ingrid Bergman and a young Gregory Peck are good enough. I just wished they had more to do.

Peck plays Dr Edwards. He is to replace the head of a mental institute. Upon arrival, he meets and is attracted to Dr. Constance Peterson (Bergman). However, it soon becomes apparent that Edwards is not himself. Constance and the head shrink Edwards was to replace, learn that Edwards has a mystery about him that involves murder.

Edwards explains his dreams to the two psychiatrists. They in turn translate them, quite literally, to find the truth. Edward's dreams are by Salvador Dali. The movie never explains why. A wagon wheel in his dream is stretched long at one end. Curtains have eyes. These are interesting images, but none-the-less pointless.

The movie drags in places and has lots of talking. Hitchcock does have some masterful direction though. During a skiing scene, Bergman and Peck are obviously not actually skiing. Due to the necessary close-ups the scene looks technically fake, but it does allow the audience to see the expressions on the actor's faces. Bergman looks scared and Peck looks menacing. You are not sure where this scene is going to go. It is a classic Hitchcock device. He liked to let the audience's imagination do the work for him. In a scene near the end of the movie, Hitchcock gives the audience a view of Bergman leaving a room that is simple yet brilliant. You have to see it.

Like Tarantino today, Hitchcock was the standout director of his time. He set new standards and took artistic chances. Spellbound is not his best work, but it does showcase his originality as well as his trade marks. 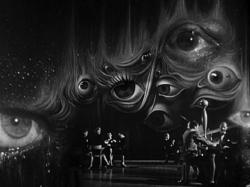 A dream sequence set designed by Salvador Dali for Spellbound.

Alfred Hitchcock made so many famous movies that Spellbound often gets overlooked. It was quite popular with audiences of its day and received six Oscar nominations including Picture and Director. This was the second Alfred Hitchcock/David O. Selznick director/producer team-up. It had been five years since Rebecca but neither had lost a step in the interim. Spellbound is a solidly satisfying romantic/mystery and a glorious example of quintessential Hitchcock.

Ingrid Bergman was at the absolute peak of her popularity in 1945 and Gregory Peck, a newly minted star, was the hottest young leading man in town. They were both Oscar nominated that year but not for their work in this film. Bergman's was for The Bells of Saint Mary's and Peck's for The Keys of the Kingdom (neither won). Her sexually repressed analyst and his slightly sinister amnesiac smolder up the screen together. Sure their relationship crosses all ethical boundaries of the psychiatric profession but it makes for a compelling romance.

Eric, I'm not sure I get your criticism of the dream sequence. Yes these surreal sets were designed by Salvador Dalí to create the image of a disturbed psyche (see photo), but in the world-within-the-movie they are not supposed to be works of art by Dalí the famous artist. All of the details, such as the truth behind the distorted wheel, are interpreted into real events. So what is there to explain?

I do agree with my brother that this watch pot takes a while to boil. For me the story doesn't really become engrossing until Dr. Peterson and her mentor Alex (an Oscar nominated Michael Chekhov) are interpreting Ballantine's aforementioned nightmare. As Ingrid Bergman says to Gregory Peck, “Good night and sweet dreams... which we'll analyze in the morning.”

The final thirty minutes of Spellbound represent Hitchcock at his finest. He was not only the master of suspense he was also the undisputed originator of the twist ending. Sure there are always a few silly details that date Hitch's work such as the distracting rear projection during the skiing scene Eric mentioned, or when the police detective draws a pair of glasses on a glamor shot of Bergman and suddenly they are able to recognize her as Dr. Peterson. But his ability to build tension and create memorable moments with his camera are unequaled. The ending is brilliant as Bergman confronts the villain in what at first appears to be a foolish move on her part. As he tells her, “You're an excellent analyst, Dr. Peterson, but a rather stupid woman.”

Spellbound was one of the first movies to deal with psychoanalysis. At one point Ballantine says to Alex, “That Freud stuff's a bunch of hooey.” Alex replies, “Oh, you are a fine one to talk! You have a guilt complex and amnesia and you don't know if you are coming or going from somewhere, but Freud is hooey! THIS you know! Hmph! Wiseguy.” As for Hitchcock, he was quoted describing the plot to Spellbound as, “just another manhunt wrapped up in pseudo-psychoanalysis.”

For me what sets Spellbound apart is the reversal of the traditional matinee sex roles. Ingrid Bergman plays the hero, while Gregory Peck is the damsel in distress, so to speak. For 1945 this was a big deal and today it retains a more modern sensibility than most 1940s movies because of this fact. I agree with Eric that this isn't Hitch's best work but it is still pretty damn good.