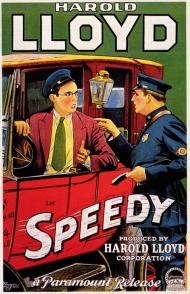 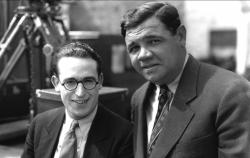 Harold is a big New York Yankees fan who cannot seem to keep a job. As the movie opens, Harold is working as a soda jerk, but his mind is on the Yankees/White Sox game. He keeps calling a friend to get the score. He soon loses the job. To make up to his patient girlfriend, he takes her to Coney Island for some amusement park fun. He also picks up a dog along the way. It has little to do with the plot, but it is fun watching them play around on the rides.

Meanwhil, his girlfriend's grand-dad is getting an offer to sell his horse drawn trolley car and line. The man wanting to buy it is a bit of a gangster. The grand-dad makes the gangster an offer that Harold raises when he finds that the line is worth more than the gangster is offering. This infuriates the gangster and he plots to steal the trolley.

In the meantime, Harold gets another job. This time he is a Taxi Cab driver. The highlight of the movie is when he gives Babe Ruth a ride to Yankee Stadium. The Babe nearly gets sick as Harold races through the city so he will not be late for his game. The Babe invites him to watch the game only to have Harold sit behind his new boss.

With the help of a bunch of old Civil War veterans, and his dog, Harold does battle with the gangster's goons and the movie ends with a big chase through the city. Harold drives the trolley car while being pursued by the gangsters and the police.

As both Scott and Patrick live in New York, I wonder what they would think of the many location shots in this movie. Silent films were quite often filmed on location, and it is as historically important as it is valuable to the entertainment of the movie. The race looks very real and it shows what the city used to look like.

Speedy is well paced and features the greatest sports legend of his time. The plot wanders some but those scenes are the best bits. 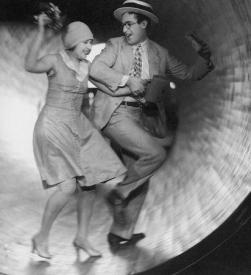 Chaplin, Keaton and Lloyd were all masters of the sight gag. Whereas Chaplin's had whimsy and Keaton's brilliance, Lloyd's were merely clever, but his were delivered at the most frantic pace. The early scene where Harold is working as a soda jerk squeezes in half a dozen gags in half as many minutes.

Chaplin was tragic in the fact that he was usually no better off at the end of the movie. Keaton would get the girl but he never seemed all that pleased about anything. In comparison Lloyd seems positively jubilant about life. This probably explains why critics always mention him third. But I think among kids (of all ages) he is the most popular. Kids don't care about art in a slapstick silent comedy. They just want to laugh. Plus Lloyd did the most daring stunts of the three. Not counting Keaton's house falling stunt of course.

Speedy is a great example of Lloyd's talent near the very end of the silent era; this being his last silent movie. And as Eric said it is a wonderful time capsule of Manhattan and Coney Island. God has Coney Island changed! And not for the better. The Cyclone is about the only thing left standing that was there in 1928.

Speedy lives up to its title. The pace is swift especially the scene where Harold delivers the Babe to Yankee Stadium. He does with traffic what he did by climbing a tall building in Safety Last.

It's interesting to note that unlike Chaplin and Keaton, Lloyd was able to successfully transfer his stock character to the talkies. Speedy is the only silent movie of his that should have had talking. There is more dialogue in the subtitles here than in most earlier silent pictures, a clear sign that writers were invading Hollywood at this time; and though some of it is quite clever, it only reminds us that the movie is silent. The chase scenes remain a hoot though. 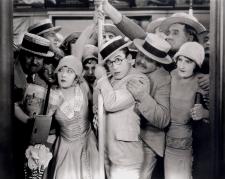 Harold Lloyd rides the subway at crush hour in Speedy.

What struck me about the New York locations was how even 80 years ago the movies were playing fast and loose with New York’s geography. During the street car chase scene the street car goes from Brooklyn to Manhattan, through a pre-closed to traffic Washington Square Park, back down to the Brooklyn Bridge and all around the town with a complete disregard of time and location. Honestly though, I was fascinated to see old Times Square, elevated trains in Manhattan, the old subway car (where people behave basically the same then as now) and Coney Island at its height. It’s an amazing time capsule of the city.

As a Yankees fan I also enjoyed the inclusion of the Babe in a cameo. I also found it interesting how the dialogue cards all refer to Yankee Stadium as THE Yankee Stadium, since today it never gets the definite article. One of my favorite bits in the film is when Harold is communicating the score of the Yankees game using food as the scoreboard; donuts for 0’s, a banana for 1 and most cleverly, a bitten pretzel for the number 3.

I agree Eric that the Coney Island portion of the film is separate from the plot. It could have been removed from the feature and released as a short on its own. It seems that Coney Island was a popular filming spot for silent films and it’s easy to see why as it was truly a magical place at the time; a far cry from the rather rundown, seedy place it has become. Although there are some very amusing and entertaining sequences there, cutting the movie’s length wouldn’t have been a bad thing. I enjoy silent shorts more than full length silent features.

Like you Patrick, I thought the subtitles were excessive for a silent movie and quite a lot of it is in the form of dialogue. If only they could have made them true subtitles and run them super-imposed over the film instead of interstitial cards. You really can see how the movies had developed and were already closer to talkies even before the sound began.

This is a fun movie. I’ve never been as big a fan of silent movies as either Patrick or Eric, but Lloyd’s films are usually just pure fun and Speedy is no exception.