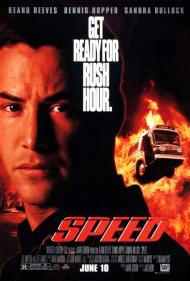 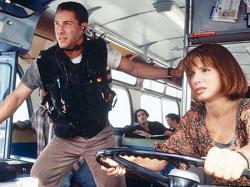 Speed is one of the most purely entertaining movies ever made. From start to finish it never stops moving, gripping you from the opening elevator scene and carrying you along the surface streets and highways of Los Angeles, before ending with a bang in front of Grauman's Chinese Theatre. It's one long series of perfectly executed, popcorn munching moments.

The plot is so simple that it has become a cliche, parodied countless times. A bomb is placed on a Los Angeles city bus. It is activated when the bus exceeds 50 miles per hour and will explode if its speed dips below that speed again. Sure, it's elaborate and implausible, but you won't care while watching it. It's actually quite ingeniously simple.

Keanu Reeves stars as LAPD officer Jack Traven. It seems less odd seeing him as a serious action star now, with the benefit of hindsight seen through the prism of The Matrix movies, but at the time he was most famous for playing the slacker dude of the Bill & Ted movies. For this part he buffed up and buzz cut his famously floppy hair. He does quite well in the part and the success of this movie was a career changer for him.

As originally scripted, the character of Jack was a smart aleck cop with a quip for every occasion, very much in the vein of John McClane from the Die Hard films. Joss Whedon, whose work went uncredited, doctored the script, making Jack much more serious. This was a smart move. Because of Reeves' slacker persona, it would have been difficult to take him seriously if he'd played the role as a smartass. A few of the one-liners do remain, most noticeably in the film's climax aboard the train, but by this time, we've adjusted to seeing Keanu as a  badass character.

This was also a career changing movie for co-star Sandra Bullock. She'd appeared in movies before this one, but this is the role that pushed her onto the A-list. Her part is fairly small, but she makes an impression. She's cute and brings a vulnerability to the part that is appealing. And even though she's basically playing the damsel in distress, she also gets to drive the bus and manages to create a fully rounded character.

Despite most of the plot taking place in the confines of a bus, the action and the tension never let up. The script continuously throws up obstacles alongside enough human moments so that you not only remain on the edge of your seat, but also care about what happens.

The soundtrack also contributes greatly to the action. The thumping, recurring theme heightens the sense of tension. It won the Oscars for Best Sound and Best Sound Editing.

Apart from those two technical awards and another nomination for Editing, it was ignored at the Academy Awards, but it cleaned up at the MTV Movie Awards. On that, more pop culture oriented awards show, it won Best Action Sequence, Best On-Screen Duo, Best Villain and a dual win for Bullock, who took home Best Female Performance as well as Most Desirable Female.

With the success of this movie, a sequel was inevitable, despite Reeves refusal to participate in it. Bullock's character took center stage while Jason Patric played the male lead. The results were disastrous and it is widely regarded as one of the biggest flops and disappointments of the 1990s.

In terms of sheer entertainment, this movie is hard to top. Action movies like this one are often dismissed by the critics, but when they're as well made as this, they remind me of why I love the movies. 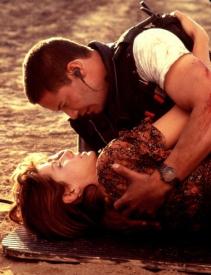 My favorite one-liner comes early in the film when the police are deciding what to do about the people stranded in the elevator. One cop asks, “Anything else that’ll keep this elevator from falling?” and Reeves remarks, “The basement.” Not all of the lines are gems. After realizing Reeves is up to something, Hopper says to himself, “Don’t fuck with daddy.” Hoppers best line in the entire film is when he says to Reeves, “Do not attempt to grow a brain.”

Speed is over the top in so many ways but, as Scott wrote, remains an extremely fun watch. Reeves and Daniels make their entrance in a car that flies over hills. Right after the bus blows up in front of Reeves, he just happens to know to answer a public telephone that is ringing nearby. There is Keanu Reeves using his big boy voice when he shouts, “FREEZE!” to Hopper, who is none too impressed and walks away. The worst moment is when the bus jumps 50 feet into the air. Just before attempting the jump Reeves walks the bus aisle making like a stewardess telling people to stow things under their seat and to put their heads down, as if either action will make the slightest difference if they crash.

Despite its flaws, and it has many, Speed still entertains in ways most movies only wish they could. The pace is unrelenting and the action pretty much non-stop. Reeves, playing against type, and Sandra Bullock at her most adorable make a great screen couple caught up in a game of explosions and high speed vehicles. They are both instantly likable. If not for their charm leading us through this fantasy action film we would not care half as much as we do about the outcome. 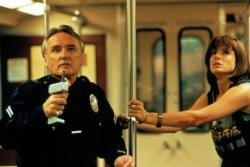 Speed was almost a very different movie. It was originally envisioned with Jeff Bridges in the role of Jack and Ellen DeGeneres (Yes, I said Ellen DeGeneres) in the role of what would have been a much more comedic Annie. The likes of George Clooney, Johnny Depp, Bruce Willis, Arnold Schwarzenegger, Michael Keaton, Tom Cruise, and Tom Hanks all turned down the chance to play Jack Traven before it went to Keanu Reeves.

Fortunately they cast Keanu Reeves, Sandra Bullock, and Dennis Hopper. The 3 of them all give iconic performances. Reeves makes a convincing action hero. He certainly looks the part with his chiseled features and lean yet muscular physique. Bullock, for her part, gives arguably the greatest star making turn of the 1990s. She went from being an obscure struggling actress to a household name practically overnight. Dennis Hopper is believably menacing as the bad guy. Nobody played psychotic geniuses better. Hopper always brought a certain edginess to his roles and this movie's success owes a huge debt to him.

I am in total agreement with my brothers on this one. I loved Speed when I first saw it in 1994 and I enjoyed it nearly as much today. Sure there are a few plot holes. Eric mentioned the pay phone ringing after the bus blows up. Well why didn't Jack use that same phone to call either the police or bus station and let them know the situation. Although conveniently no radio is shown on the bus one assumes that in 1994 L.A. bus dispatchers would have had a means of contacting drivers en route. It takes quite a while for the bus to achieve 50 mph and thus arming the bomb. Jack instead attempts to run down the bus on foot.

Despite a few flaws in logic this movie is a complete winner. As far as popcorn munching action flicks go Speed is hard to beat.