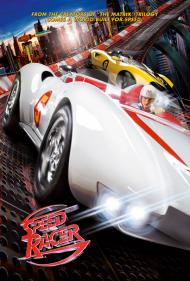 Directed by: Andy and Larry Wachowski 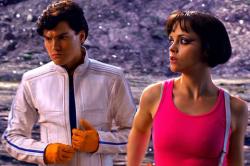 Watching Speed Racer is more painful than listening to a Jessica Simpson song. At least you know Simpson will shut up in 3 minutes. Speed Racer drags on for a mind boggling 135 minutes.

After winning the race, and several more flashbacks, Speed is offered a lucrative contract from Royalton Industries. He turns it down and earns the wrath of the companies CEO, who reveals to Speed that many big races are fixed for profits. The CEO even threatens the Racer family business. To save the day, Speed enters a cross country race known as The Crucible. Although his family is at first upset by the decision, Rex Racer “died” in that race, they, as well as the mysterious Racer-X, soon join up to help him win.

Speed Racer is nearly an un-watchable film. The race scenes are supposed to be exciting, but are merely annoying. When not racing, the film is over directed with closeups moving across the screen while other images move in other directions. The film is more computer animated than it is live action. If you are going to turn a cartoon into a live action film, MAKE IT LIVE ACTION!

The problem here lies squarely with the Wachowski brothers. Scott and I once had a conversation about why so many people write and/or direct a great first film (in their case The Matrix) but then struggle to do another great film. We concluded that when they were starting out and wanted their film made, they probably took advice on script changes from whomever may help get their movie made. Now that they are famous, it is the studios who kiss their ass and are scared to tell them when an idea sucks, resulting in lousy movies like Speed Racer, not to mention The Matrix sequels.

Speed Racer is a torture to watch. The only good thing I can say about it, besides the fact that Jessica Simpson did not sing the theme song, is that no one can force you to watch it. Maybe they should send copies of this DVD to Guantanamo Bay. If a viewing of this movie does not get a terrorist to talk, nothing will.