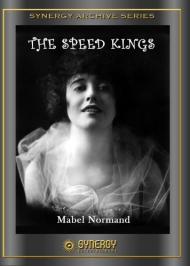 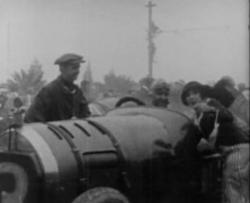 In 1913 professional car racing was a new sport, not seen by many people.  The first Model T's were sold in 1908.  Many people did not even own a car in 1913.  In fact, the first official automobile race held in the United States was sponsored by the Chicago Times-Herald in 1895.  I am not sure if The Speed Kings is the first film to feature a car race, but it certainly has to be one of the first.

The Speed Kings is extremely short on plot.  Mabel and her dad go to a race, but they each want a different driver to win.  Her father wants her to marry one driver while she likes another.  This upsets her dad and he tries to sabotage her favorite driver's car. They sit in the stands with Mabel cheering while her father stews.

We then see plenty of the race as the cars are shown cruising down dirt roads.  The cars driven in the race look about as sophisticated as soap box derby cars with engines.  Interesting is that each car features a passenger whose job seems to be to look behind them and inform the driver of the other cars position, acting as human rear view mirrors.  According to WIKI, "The rear-view mirror's earliest known use and mention is by Dorothy Levitt in her 1906 book The Woman and the Car which noted that women should "carry a little hand-mirror in a convenient place when driving" so they may "hold the mirror aloft from time to time in order to see behind while driving in traffic", thereby inventing the rear view mirror before it was introduced by manufacturers in 1914."

Arbuckle as a race official has a small role but the film's biggest laugh.  Although her driver does not win, Mabel still wants to be with him and not her father's driver.  Frustrated and needing to vent his anger, Mabel's father attacks Arbuckle and proceeds to beat him up.

The Speed Kings is more about race cars than entertaining comedy.  It features real life race car drivers and the race itself gets nearly as much screen time as Mabel.  It certainly is a historical curiosity but not the most enjoyable silent film comedy short. 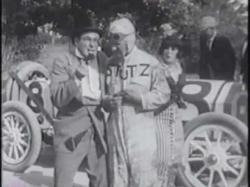 This one reel short is a car race masquerading as a narrative film. The automobile industry and the movie industry were born pretty close to the same time. Cars had been around longer, but they really began to take off in popularity around the same time that the movies did. Given how often they were featured in early movies, they could almost be considered the first product placements. They get plenty of screentime in this quickie short.

That passenger Eric commented on was the mechanic. Cars were touchy things in those days and most races weren't on a track but on roads, sometimes between two cities. If a car broke down, and they often did, then it was important to have a mechanic on hand to get it back on the road.

The drivers featured (Earl Cooper, Teddy Tetzlaff, and Barney Oldfield), were all real race drivers. Earl Cooper was quite well known, having won several national championships and Barney Oldfield was his main rival. For audiences it was probably as big a thrill to see them on the screen as it was to see Mabel.

There's not a lot for the actors to actually do in this short. Mabel gets excited while Ford Sterling as her father overacts horribly. Fatty Arbuckle doesn't have much to do until the final scene when he gets into the fight with Sterling and Arbuckle throws himself around as if he were a much smaller man.

This is a short bound to be more appealing to those interested in the history of auto racing than it is to fans of silent film comedy. 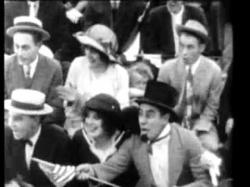 I enjoyed this short as a look into the past. The clips of this car race from a century ago are definitely the highlight of the film. Mabel Normand's reactions are quite amusing and she handled slapstick as well as any woman. Still the funniest moment comes when Ford Sterling unexpectedly leaps on Roscoe Arbuckle and mimes biting his ear. This sight gag is repeated again at the end when they get into an extended scuffle. As my brothers already said, this short is historically important as a time capsule showing the dawn of auto racing, but it's only a mildly amusing curiosity as entertainment.