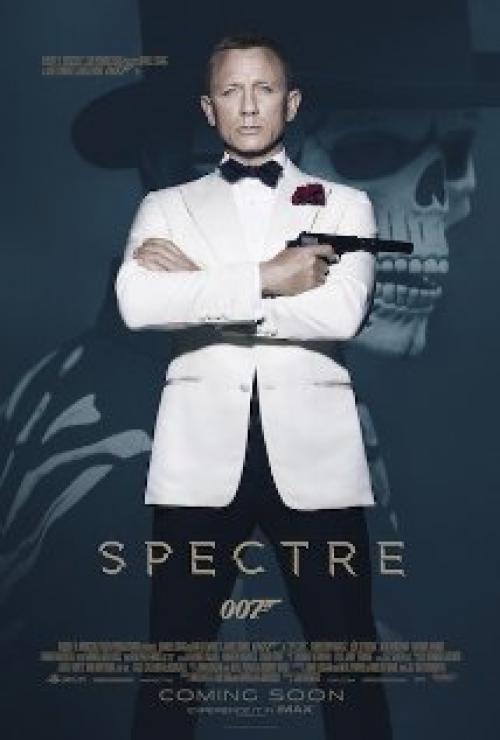 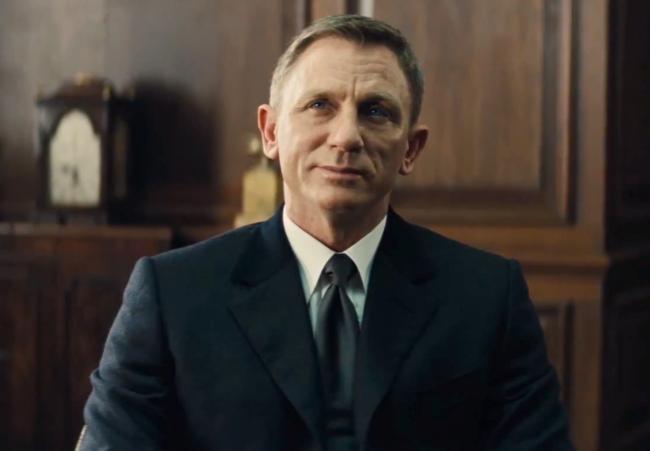 Thanks to a copyright dispute that extends all the way back to 1961, this--the 24th--Bond film marks the return of the villainous organization known as Spectre for the first time since 1971's Diamonds are Forever. However, that fact and the name of the lead character are about all those two movies have in common. While that rather joky film set the blueprint for the lighthearted, almost a spoof of themselves, Roger Moore era, this film is the grim culmination of the Daniel Craig brand of Bond.

The film opens with a bang in Mexico City during a massive parade on the Day of the Dead. Director Sam Mendes, the first person to direct back-to-back Bonds since John Glen directed both Timothy Dalton's James Bond films, The Living Daylights (1987) and License to Kill (1989), sets this scene brilliantly. It begins with one long take as the camera follows a man in a skull mask and a gorgeous woman as they walk down the street, into a hotel room, where the man removes his mask to reveal Craig's craggy face, who then, still in the same take, exits the hotel room via the window and makes his way across several roofs. What follows are explosions, a chase, and a wild helicopter ride. It's a hell of a way to open the movie and nothing that follows ever really tops it.

At 2 and a half hours, this is the longest Bond film ever made and not all of it is necessary. Unusually for a Bond film, the plot is rather topical. A new bureaucracy has developed in the world of British Intelligence. MI5 and MI6 are being combined and the double-O section might be mothballed. Instead, the new methodology is the electronic surveillance by the government of all of its citizens and since there's a new initiative for the world's major intelligence agencies to pool their resources, this would allow any government the power of spying on basically everyone in the world.

While the struggle between the old way and the new way of doing things is being fought over, Bond is out in the field without orders, tracking down a shadowy organization named Spectre. He's sent on this mission by a message from beyond the grave from Judi Dench's M, who willed him a final taped message. His one man mission leads all over the world and along the way he and we learn that all of the events of Daniel Craig's earlier Bond films, have all been connected and conducted by the leader of Spectre, Ernst Stavros Blofeld. And the film doesn't stop there, it also, for the first time in any rendition of Bond, proposes a rather preposterous, far earlier connection, between Bond and Blofeld.

Although I've never been a fan of the Roger Moore style Bond films, with their jokes and lack of suspense or tension, I've felt since Casino Royale that the Daniel Craig era Bonds have moved too far in the opposite direction. Clearly they were influenced by the Jason Bourne films, but somewhere along the way they lost the things that made Bond, Bond. Craig's Bond is less sophisticated. He's more of a blunt weapon. I've heard people foolishly say that he's more like the Bond of the books, but he's really not. The James Bond of the books is a lover of fine things, who knows which wine to order, and who isn't without a sense of humor. Simply making James Bond more serious doesn't make him more like the literary version. None of this means that I don't enjoy Craig's Bond films, it's just that since he took over I've missed seeing a James Bond who enjoys being James Bond.

Skyfall saw the reintroduction of several elements of the Bond formula and that trend continues here. The last film introduced a new Q, new Moneypenny, and a new M. This time around Bond faces off with not only Spectre and Blofeld, but also against a physically imposing henchman. He also ends up inside a villain's lair, which naturally gets blown up at one point. However, unlike most Bond films where the lair explodes, here there's another 30 minutes worth of story left to tell afterwards.

As usual in a Daniel Craig Bond film, the best moments are the action scenes. Craig, who is probably the most fit of any of the Bond actors, handles these scenes superbly. And Sam Mendes directs them equally well. Whether Bond is fighting onboard a train, racing through the streets of Rome in an Aston Martin, or using an airplane to stop a convoy of SUVs, we are left on the edge of our seats. In my review of Skyfall, I wrote that I didn't think Mendes brought much to the table, but he was either given more of a freehand this time, or he's grown more confidant directing the action, because this is one of the most beautifully shot Bond films ever.

Recently Craig made headlines when he said that he would rather "slash his wrists" than make another Bond film. He's since recanted and said he may do one more, which I interpret as meaning, if they offer him enough money, he'll suit up once again. If he doesn't come back though, this would be the perfect movie for him to end on. It ties all of his movies together and seems like the perfect bookend for his stint in the tuxedo. When they do replace him, I hope they bring back, not the jokes, but the sense of fun. James Bond is the coolest guy on the whole planet. He should get to enjoy that and so should we. 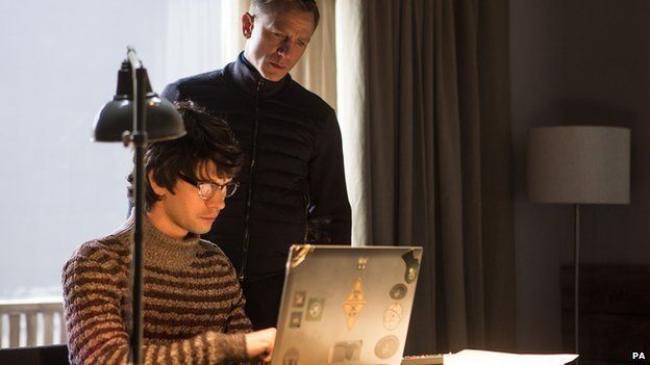 Apart from the fact that it runs far too long, Spectre isn't a horrible entry in the Bond franchise – although I'm less enthusiastic about it than was Scott. Daniel Craig seems bored with playing 007 and it's past time for a new actor to don the suit, battle the villains, woo the babes, and sip the vodka martinis (shaken not stirred). Craig looks the part in silhouette only - his craggy mug will never be James Bond to me.

I agree the opening sequence is very well-done. It draws you in to the world on the screen in a brilliantly simple yet affective manner. Unfortunately the rest of the movie doesn't live up to the promise of this opening. There are a few decent action sequences, I agree that the fight on the train is a highlight but the airplane chasing the cars scene was too much.

Scott is right that a sense of fun is missing from the Daniel Craig Bond. He's morose when he's not in action and the lighthearted moments are few and far between. The opening sequence has one where Bond falls from high up but lands safely on a loveseat. The Bond quips of old are long gone.

I love Ben Whishaw as Q. He's been a positive addition to the Bond movies, even getting in on the action this time around. A little Christoph Waltz goes a long way though. Thankfully he gets relatively little screen time. It's clear by now that his range is quite limited. He hams it up like you would expect as Blofeld but he almost seems to be in a different movie altogether. But then Blofeld is such a campy character that he doesn't really fit into the modern -post Jason Bourne- Bond world.

Spectre runs 2 ½ hours but provides only about 2 hours of decent entertainment. It's far from the worst Bond movie ever made but as a followup to 2012's Skyfall it's a huge disappointment (although the theme song "Writing's On the Wall" by Sam Smith is a winner). 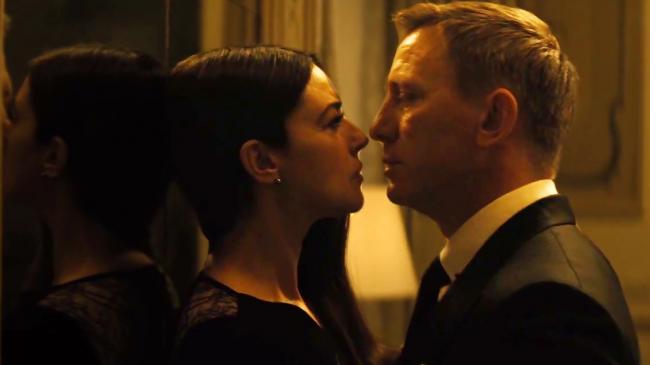 I have been impatiently waiting for Daniel Craig’s James Bond to obtain a personality. Where is the chauvinist wiseass, generations of movie goers have come to admire and love? He was politically incorrect, killing villains and bedding countless beautiful women with a twinkle in his eye and a metaphorical wink at the audience. We all knew he was a fantasy. Men wanted to be him and women wanted to be with him.

Craig’s Bond comes across a bit more realistic but who in the hell wants to be his 007? He is moody, emotionally wounded and doesn’t get half the tail previous Bond’s did. He comes across as depressed and even slightly suicidal. I hope Craig does not return as James Bond because in my humble opinion, Craig’s movies killed James Bond, at least the Bond I used to know.

I agree with my brothers that the opening scene is the best of the film and I also agree that the running time is far too long. I also cannot emphasize enough with Scott, just how horrible of an idea it was to connect Bond and Blofeld the way they do here. It was as if they took an idea from an Austin Powers film. Seriously, what in the hell were they thinking? In the 1960s, James Bond was mimicked and copied but today he is following a path already blazed by others.

I disagree with Patrick’s opinion of the theme song. Sam Smith’s high pitch whining is not appropriate for a James Bond movie theme. Then again, it does kind of fit in with Craig’s gloomy, sensitive Bond. I do agree with Patrick though on Ben Whishaw. He brings some much needed contemporary youth to the proceedings. He is the first and only young male character to ever appear in a James Bond film. With the exception of George Lazenby, all Bond actors have been middle aged or older and previous Ms and Qs have always been played by old farts.

The train scene starts cinematically romantic. Daniel Craig is in the dining car of a train in North Africa, dressed in a white tuxedo like Humphrey Bogart in Casablanca. Lea Seydoux enters in a full length evening gown, making like Ingrid Bergman. I love the nod to a classic film but why did they bring formal clothes to go to the desert to check on a spy station? It was as if someone decided there had to be a scene where Bond is in formal wear, so they just added the wardrobe.

If Spectre was a film about a different person altogether I would give this a slightly higher rating. The action scenes are mostly good, although not great. However, since this is a James Bond movie, I actually wanted to see James Bond, not this melancholy facsimile. Spectre is a serious disappointment. 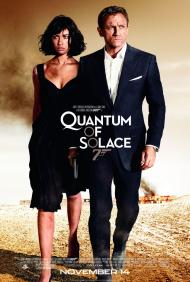 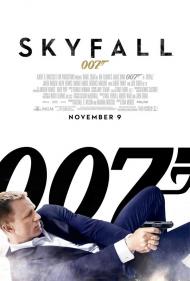