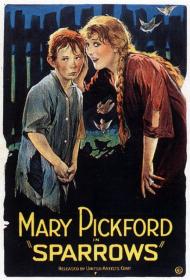 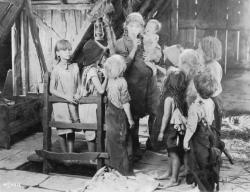 Sparrows was made near the end of Mary Pickford's career.  She would make only one other silent film before going onto make a few talkies.  She had already appeared in over 200 silent films.

Pickford plays Molly, the oldest child of a group of abducted children forced to work on a farm.  In real life she was 34, but her audience loved and accepted her in child roles, or at least in the role of a child like teenager.  The children were kidnapped and brought to the farm as slave labor.  At one point, the man who keeps them, Grimes, sells one to someone who needs help on his farm.  When a child causes him problems he throws them into the bog to die.

As the oldest, Molly is known as Mama Molly to the other children.  She hides them, feeds them and protects them from Grimes's bully son.  They look to her for everything.  For some reason they have an infant with them.

In the movies most dramatic scene, the baby dies in Pickford's arms as she sleeps.  The barn wall in front of her turns into a scene from an old Bible picture book she reads to the kids.   Jesus walks out of the scene and into the barn where he takes the baby into his arms and walks back with it.  Pickford wakes to find the baby has died.  It is a great special effect for the time.

A wealthy man's baby is kidnapped and brought to the farm.  The police start to close in on Grimes, so he decides the kids must be disposed of in the quicksand.  Molly gathers the kids and takes them into the swamp to get away from him.  This is the movies most famous scenes as they climb on a branch over some alligators.  I think they are fake, but I have read on line that supposedly they really climbed over actual live alligators.  Watch and judge for yourself.

Sparrows is also worth noting for it's social relevance to the times. Two years after this movie came out, a serial killer was caught. The bodies of the boys he molested and killed were found on a chicken farm.  Six years later, Charles Lindbergh's baby was kidnapped by someone using a ladder to get in a second story window, much like it was done in this film.  Perhaps the kidnappers even got the idea from this movie.

Although until recently, I had never heard Sparrows it has a classic feel to it.  It is one part Dickens and one part Disney.   Grimes is very reminiscent of several Dickens bad guys.  Molly could easily be a Disney heroine, singing some corny Disney song to comfort the children in need.

Pickford was a good actress, and she demonstrates it in a scene near the end where the police have her and all the other children in custody.  The father comes to claim his baby, but Molly refuses to give her up as she has come to love her like the others.  They had yet to give out Oscars, but if they had, I believe Mary Pickford would have received one for this role. 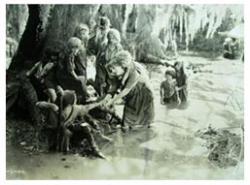 Mary Pickford as Molly leads orphans through a swamp in Sparrows.

By this time in her career Mary Pickford had been a star longer than anyone else in Hollywood. She really knew how to convey emotion with her face. She is heartbreaking in several scenes. That being said, however, her woman/child shtick had become almost a caricature by this point. Some of her mannerisms are a bit much.

As in all of her movies where she plays a young girl the other adult actors are all quite tall.

The movie itself has a very old-fashioned Gothic style to it. The setting in the swamp is very atmospheric and the scenes with the alligators hold up. I think they probably used a combination of live alligators and fake ones. The effects in the boat chase scene at the end are terrible though. They are so obviously miniatures as to be laughable.

The movie is sprinkled with religious symbolism and overt references to Jesus and God. The title is actually a religious reference. The children pray for deliverance from their bondage and question Molly as to why God takes care of the sparrows but not them.

The swamp itself was built on three acres of a back lot in Hollywood. The ground was scraped bare and hundreds of trees were brought in and planted. The bogs were made using a combination of burnt cork, sawdust and muddy water.

Sparrows is an interesting movie and it definitely entertains, although I’ll bet that even in 1926 it seemed hopelessly outdated. 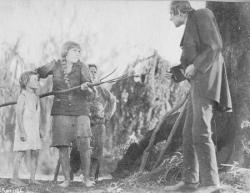 Mary Pickford defends the children from the evil Mr. Grimes in Sparrows.

One of my first reactions to this story was similar to yours Eric. It reminded me instantly of a Charles Dickens' tale. Grimes definitely reminded me of a Dickens' villain, not only in mannerisms and his cruelty, but also in his very name which reveals something of his character, a trick that Dickens often employed. Although I didn't immediately see it as a Disney tale, I do see your point. It's enough to make you wonder why they never bought the rights or even why some Broadway producer hasn't tried to turn it into a musical.

I also agree with you Patrick that it is a bit corny, but in spite of that I still enjoyed it. It's so unabashedly earnest in its melodrama that it's hard not to like it. Despite its corniness though, it's also a fairly dark tale. You have children being held against their will, starved and forced to work basically as a slave labor force, with one of the children even being sold quite casually.

According to the book Mary Pickford Rediscovered, which features interviews with several people involved with the making of this movie, Pickford perpetuated the legend that she and the children crawled across the tree just above real alligators, but in reality they were filmed in one shot while the alligators were filmed in another and then the two were cut together. Cameraman Hal Mohr is quoted as saying, "There wasn't an alligator within ten miles of Miss Pickford. Do people think we were crazy?"

Pickford does a decent enough job in the lead. In the long shots she is able to convincingly play the teen girl, but in the closeups it is obvious that she is much older. The children provide some much needed humor in the story with their colorful language. Gustav von Seyffertitz plays a convincing villain, but this is Pickford's movie and she carries it well.

Sure, the melodrama is dated, but it entertains nonetheless.